As previously stated, during the late 1750s the last great phase of rebuilding work at Dublin Castle was begun. It doubled the depth of the south east range and included the State Corridor and all the rooms to the south of it, referred to as the Garden Building. It consisted of a suite of five rooms, the private apartments of the then Viceroy, or Lord Lieutenant, John Russell, 4th Duke of Bedford (1757-1761).
Bedford, shortly before leaving Ireland after his first term in office in early May 1758, sought funds to rebuild the south east quadrant of the Upper Castle Yard. Funds were granted in June and the Surveyor General, Thomas Eyre who had already prepared plans, set to work immediately constructing a new south facing 13-bay, 3-story façade of Granite and Portland stone. 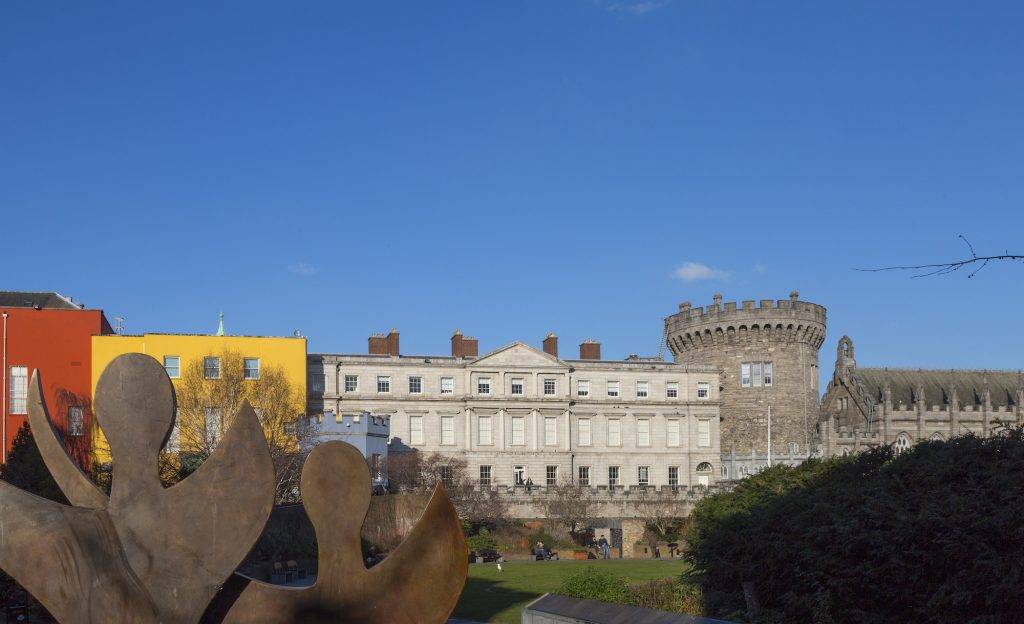 Work proceeded rapidly and the new building was roofed by November 1758. By June 1759 the new Viceregal Apartments were ready to be furnished and hung with either silk or wallpaper. As originally designed the apartments consisted of a large central 3-bay Drawing Room flanked by the State Bedrooms of the Duke and Duchess with adjoining Dressing Rooms at either end. This arrangement did not last for long however, and by the time Euclid Alfray drew his plan of the castle in 1767 the 3-bay central Drawing Room had been reduced to a 2-bay State Bedroom with the position of the State Bed clearly marked on the plan. These rooms, which are now used to house temporary exhibitions, retain most of their original modillion cornices and joinery, though all of the mantels have been replaced since the 1750s. During the restoration of 1964-1968 the rooms were greatly enhanced by the installation of two superb Rococo ceilings, and wall decorations, attributed to Bartholomew Cramillion (fl.1755-1772). 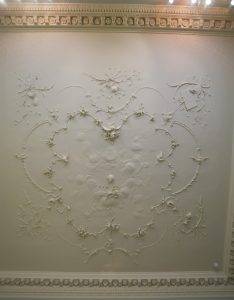 According to the leading expert on Irish stuccowork, Joseph McDonnell, Cramillion arrived in Ireland in 1755 to decorate the ceiling of the Rotunda Hospital Chapel, thereby introducing a new German Rococo influence into Irish stuccowork. The ceilings now in Dublin Castle were commissioned by the eminent Cork physician and Professor of Physics at Trinity College Dublin, Dr Edward Barry.  They came from Mespil House, Ballsbridge, which was demolished in the late 1940s. The house was built for Dr Barry in the early 1750s. Cramillion’s work there is believed to have been executed in the late 1750s. Given Dr Barry’s profession it is perhaps not surprising that one ceiling should represent Medicine with the Arts and Sciences while the other depicts Minerva introducing the Arts to Hibernia. 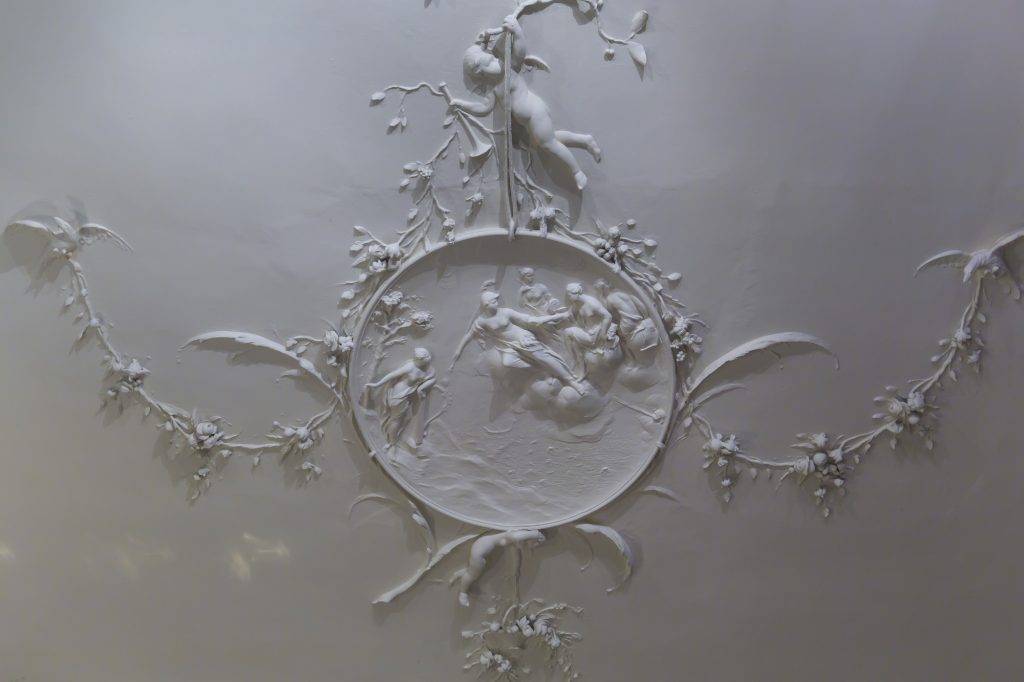 Across the State Corridor from the former Viceregal Apartments is the Apollo Room. This room is not original to the castle. The south east range of the Upper Castle Yard was seriously damaged by fire in February 1941. Several rooms were lost in the conflagration including the old Throne Room or Presence Chamber. During the reconstruction of the State Apartments in 1964-1968 the restorers learnt that there was a mid18th century Dublin Drawing Room in storage in the National Museum of Ireland. 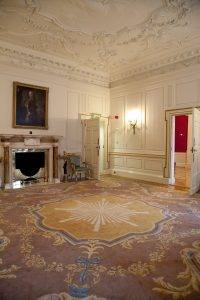 This room had an interesting provenance, having come from Tracton House, St Stephen’s Green, which was originally built for Arthur Jones Neville, Surveyor General of Ireland, in 1744. Neville, who was later dismissed from office for embezzlement of public funds, was responsible for rebuilding much of the existing fabric of Dublin Castle, including the two Triumphal Arch gateways in the Upper Castle Yard. It seemed appropriate therefore that his Drawing Room should be secured for Dublin Castle. When Tracton House was demolished to make way for a new branch of the Bank of Ireland in 1912 the ceiling, wainscoting and fittings of the first floor back Drawing Room were salvaged and donated to the National Museum of Ireland where the room was re-erected. The room was dismantled and put in storage in 1939 and, fortunately for the restorers in Dublin Castle, was still in storage in the 1960s. The room, which ranks amongst the finest Dublin domestic interiors of the mid18th century, was a perfect fit for the space available in Dublin Castle and was carefully reconstructed in the State Apartments in 1966. During the reconstruction of the room it was found that the old wainscoting was in poor condition and the decision was made to reproduce it in replica. The mantel, cornice and ceiling are however original. 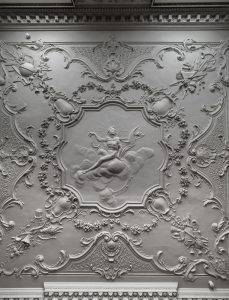 The ceiling, which is inscribed with the date 1746, is undoubtedly the most important feature of the room and it is regarded as one of the finest ceilings of the mid18th century in Ireland. It has been attributed by Joseph Mc Donnell to an unknown continental master referred to as the St Peter’s stuccodore. This master stuccodore is known to have worked on the interiors of St Peter’s Church, Drogheda, Russborough House, Co Wicklow and Bellamont Forest, Co Cavan. The room takes its name from the seated figure of Apollo Musagetes in the center of the ceiling. The four trophies in the corners of the ceiling represent the Arts, Hunting, Music and Love and are based on engravings of the 1730s by Jacques Dumont le Romain.

The chimneypiece, which is made of white Carrara and yellow Siena marble, is a typical Dublin mantel of the 1750s or 1760s. It is flanked by two free standing Ionic columns with Scamozzi capitals and the carved central bas relief depicts Venus and Mercury teaching Cupid based on an engraving of an overdoor by Francois Boucher. The floor is covered by a Donegal Carpet specially designed for the room by the Office of Public Works architect, Raymond McGrath. The pattern is intended to compliment the design of the ceiling above. The room is furnished with a set of four Louis XV style gilt-wood armchairs upholstered in Beauvais tapestry illustrating the fables of La Fontaine. These formed part of the Granard bequest to the state in 1973 by Arthur Hastings Forbes, 9th Earl of Granard (1915-1992). 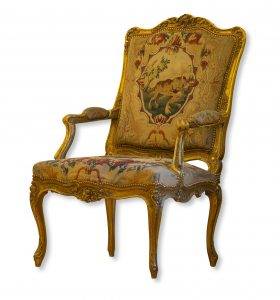