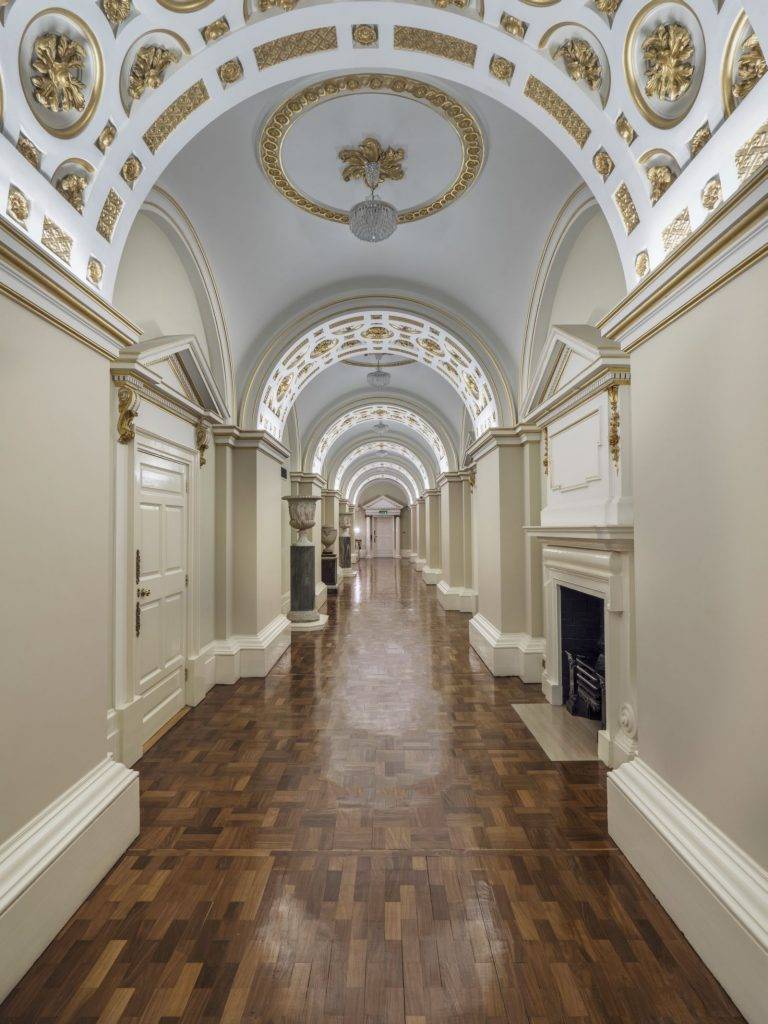 Leaving the Battle-Axe Landing the visitor turns right and enters a small annex lit by an oval lantern decorated with a frieze of delicate husk garlands in the Neoclassical Style. From the lantern hangs an early Victorian brass chandelier. Directly ahead are two doors, the one on the left leads into the State Corridor, while that on the right leads into the Connolly Room. The Connolly Room is named after the 1916 Rising leader James Connolly, who was wounded during the fighting. In the aftermath of the rising, the wounded prisoner was taken to the military hospital in Dublin Castle where he was nursed while awaiting court marshal and execution in Kilmainham Gaol. The Connolly Room retains its typical mid18th century joinery and modillion cornice, though the white marble mantel is a late 19th century addition. The room, which is lit by an early Victorian gas chandelier, is furnished with a simple cast iron bed and hung with the portraits of the 1916 leaders. 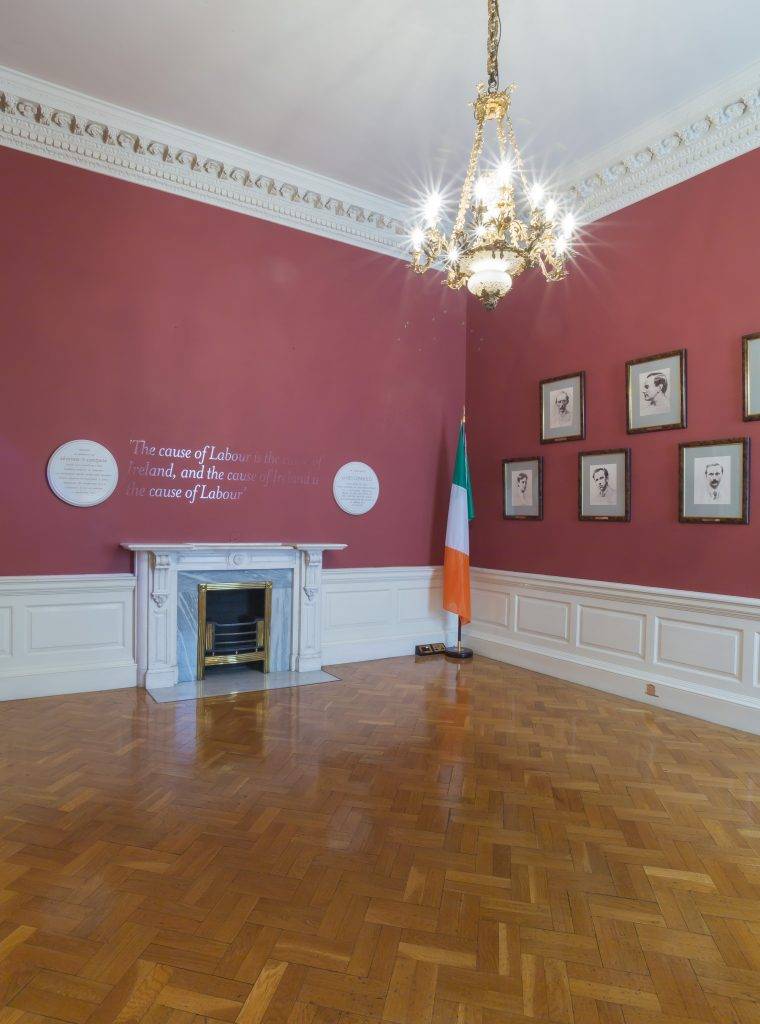 From the Annex the visitor moves into the State Corridor which is one of the architectural highlights of Dublin Castle. The State Corridor is located in the south east range of the upper castle yard, which was the last part of the castle to be rebuilt after the fire of 1684. This range was begun during the Surveyor Generalship of Arthur Jones Nevill and completed under his successor, Joseph Eyre, in the late 1750s. However, all the surviving architectural drawings for the State Corridor and the adjoining rooms are signed by Eyre’s deputy, Joseph Jarrett, whose role in the design process remains unclear. This spinal corridor divides the north facing state drawing rooms overlooking the courtyard from the south facing former vice-regal apartments overlooking the garden. It is believed that it was originally designed as a ceremonial route linking the Staircase Hall with the Privy Council Chamber in the east range, however, it was never used as such and was reserved for the use of the Viceroy. This corridor, which was originally top lit, is clearly modelled on that designed by Sir Edward Lovett Pearce in the old Parliament House, now the Bank of Ireland, in College Green. Like Pearce’s corridor it is divided into domed bays but lacks the niches and protruding piers that give life to Pearce’s original. The soffits, or undersides, of the arches which divide the corridor into bays, are richly decorated with sunken coffers containing gilded rosettes and at either end stand handsome pedimented doorcases flanked by freestanding Ionic columns framed by arches. The corridor was heated by two large Palladian style mantels with pulvinated friezes, shouldered architraves and large curly volutes. Both chimneypieces are surmounted by pedimented overmantels which would originally have contained paintings. It was common in the 18th century, when not in use, to decorate empty fireplaces with floral arrangements or arrangements of ceramic vases. Decorative chimneyboards depicting floral arrangements or urns were also popular. A Victorian engraving to the State Corridor shows one of the fireplaces ornamented with a Peacock.

The State Corridor as it exists today is hung with the portraits of every Irish President since independence and it is ornamented with a small collection of late 18th century Italian urns in the Neoclassical Style. These are the remnants of one of the most important collections of sculpture assembled in Ireland in the Late Georgian Period and were acquired in Rome by Valentine Lawless, 2nd Earl of Cloncurry, on his Grand Tour between 1803-1805. Of these, the most important is a of a pair of large Campana Urns executed in white Carrara marble, one depicting Apollo and the Muses and the other a Bacchanalian Dance. These were first recorded in the Dining Room at Lyons House, Co Kildare, in 1826. They were acquired by the Office of Public Works for Dublin Castle at the auction of the contents of Lyons on 23rd October 1962. 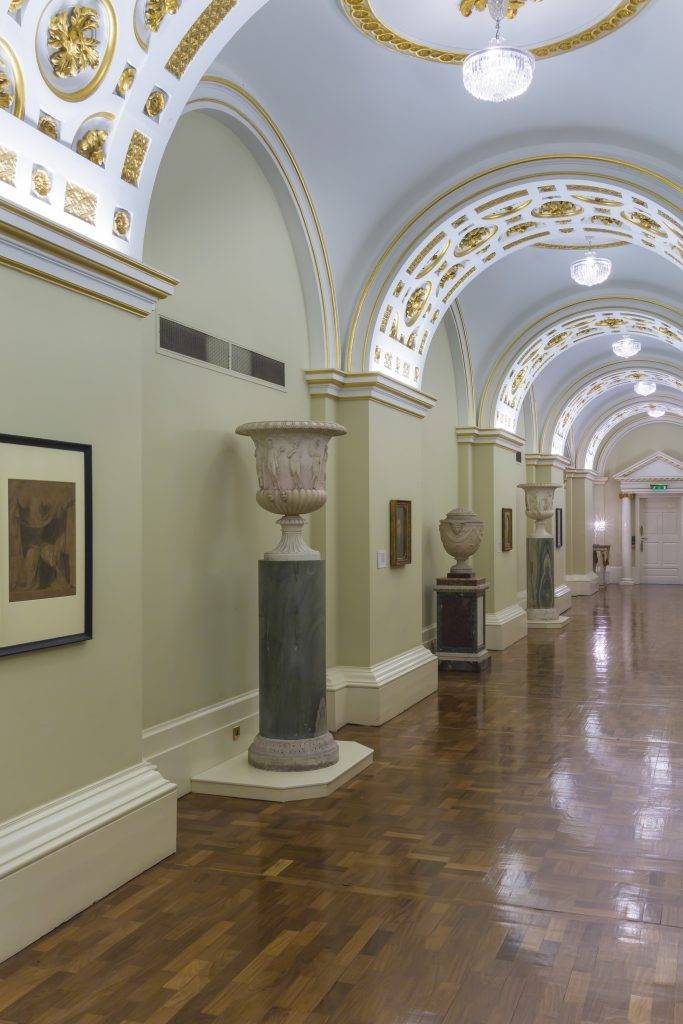 It is not without irony that these urns should have ended up in Dublin Castle as Cloncurry, a former United Irishman who had been imprisoned in the Tower of London (1799-1801), was persona non grata with the British authorities in Dublin Castle during his lifetime.