Scroll Down for an Online Tour
"

The State Apartments dominate the south range of the Upper Courtyard.

They were built as the residential and public quarters of the viceregal court and were the seat of the executive and focus of fashionable and extravagant social life. Today the Apartments are the venue for Ireland’s Presidencies of the European Union, presidential inaugurations and prestigious functions.

Choose a room to explore via the menu on the left, or simply scroll down.

This grand imperial staircase was the first of its type in Dublin and was created in 1749. Its generous architectural form created a suitably imposing first impression of the State Apartments. During the social season, debutantes and members of the aristocracy ascended this staircase in court dress on their way to attend balls, dinners and presentation ceremonies given by the Viceroy. Since 1938, it has been part of the main ceremonial route used during the inauguration of the President of Ireland in the State Apartments.

This great neoclassical corridor was designed in 1758. It provided access to a series of formal State reception rooms overlooking the main courtyard, as well as to the quarters of the Viceroy and his family overlooking the Castle gardens. At its far end, it led to the Privy Council Chamber. It was to this room that each new Viceroy processed when being sworn into office. On 16 January 1922, the Privy Council Chamber was the setting for the handover of Dublin Castle from the last Viceroy to Michael Collins and the new government of the Irish Free State. 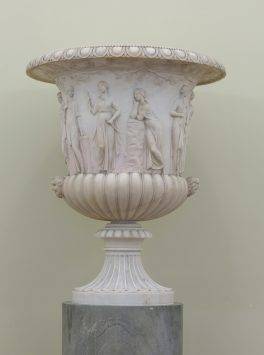 These four rooms were originally the quarters of the Viceroy and his family. They included the State Bedchamber, the Viceroy’s Study, the Viceroy’s Dressing Room and the Vicereine’s Boudoir. Two of the rooms feature exquisite rococo plasterwork ceilings dating from the 1750s by the renowned stuccodore Bartholomew Cramillion. Today the rooms are used as gallery spaces for a vibrant programme of exhibitions, many of which explore themes relating to the Castle’s history. 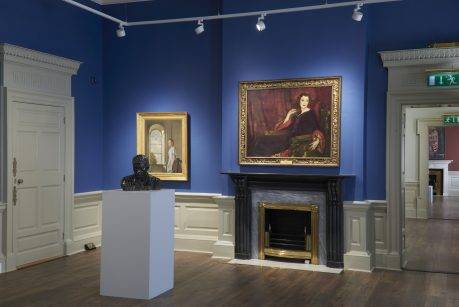 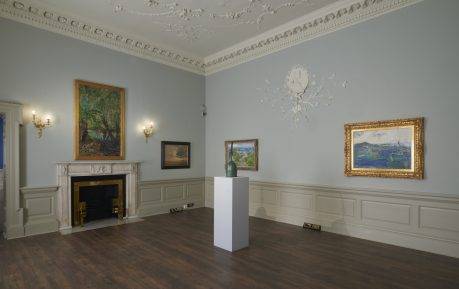 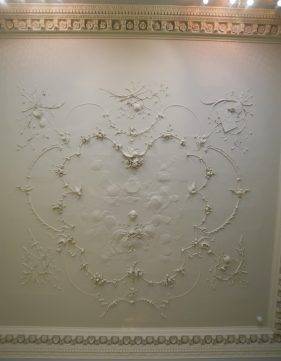 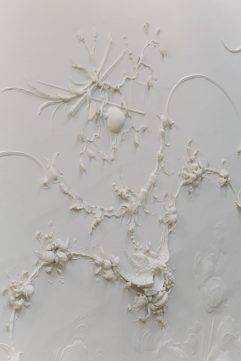 The James Connolly Room is an important landmark in the story of the Easter Rising of 1916. The room was once part of the Viceroy’s quarters. In 1915 this room, together with the rest of the State Apartments, became a Red Cross Hospital for soldiers wounded in World War I. It was here, in 1916, that James Connolly was treated for the injuries he had sustained in leading a rebellion against British rule in Ireland. Known as the Easter Rising, the rebellion resulted in the execution of the rebel leaders. On 12 May 1916, James Connolly was brought from here to be executed at Kilmainham Gaol. 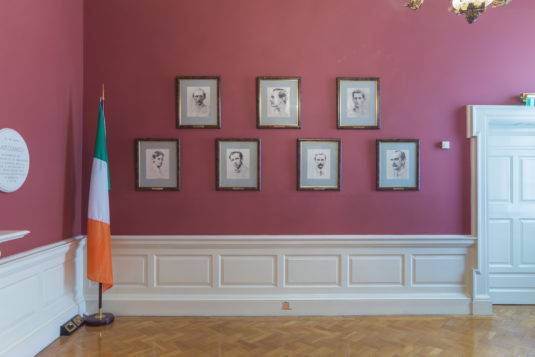 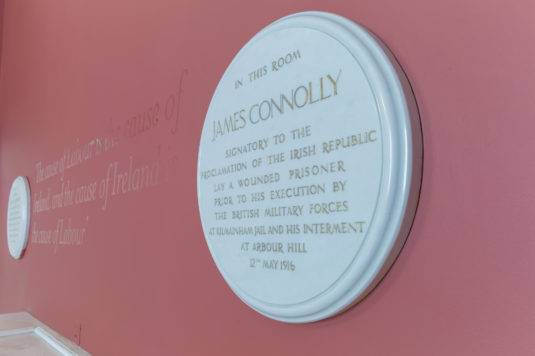 The Apollo Room derives its name from the figure of the mythological Greek god of the arts and music, Apollo, at the centre of its plasterwork ceiling. Having been rescued from a nearby Georgian townhouse in 1912, this room was installed in the State Apartments in the 1960s during an ambitious restoration project. Inscribed with the date 1746, the ceiling arrived at Dublin Castle in eleven separate pieces that were seamlessly reunited to form a superb example of eighteenth-century craftsmanship.

The State Drawing Room was created in 1838 and was used mainly by successive Vicereines (the wives of the Viceroys) as a formal sitting room and for holding audiences with Irish courtiers. During the royal visits of 1907 and 1911 Queen Alexandra and Queen Mary also received guests in this room. Today the room houses one of the most significant paintings in the Dublin Castle collection, a late portrait by one of the leading European portrait painters of the seventeenth century, Sir Anthony Van Dyck. The room is still used by the President of Ireland for the reception of visiting dignitaries.

The Throne Room was once the epicentre of royal ceremony in Ireland. It was created in 1788 as an audience chamber in which the Viceroy received guests on behalf of the British monarch. It was also where young debutantes were presented at court to mark their formal entry into aristocratic society. The throne was made for the visit to Ireland of King George IV, in 1821. It was later used by Queen Victoria and King Edward VII during their visits to the Castle. The last monarch to use it before Irish independence was King George V, in 1911. On display over the doors in this space are six important mythological paintings by the Italian artist Gaetano Gandolfi, painted in 1767.

This room takes its name from the collection of portraits of Irish Viceroys that have hung on its walls since 1849. The room’s main function was as a dining room where State dinners were held. In the early eighteenth century, expensive and exotic foods such as anchovies, mangoes, caviar and orange blossom water were served here, reflecting the wealth and status of the Viceroy and his court. The room continues to be used for State receptions by the Irish government today. The dining table is laid with Waterford crystal and the Irish State dinner service, which features the national emblem, the gold harp.

The Wedgwood Room takes its name from the blue and white decorative scheme that recalls the colours of Wedgwood pottery. It was completed in 1777 in the neoclassical style and later became the Castle’s billiard room. Lit only from above by a small glass-domed roof, it was a favourite place for the creation of temporary indoor gardens filled with exotic birds, trees and water fountains in the nineteenth century. These installations provided cooling refreshment for guests at the Castle’s crowded State balls and receptions. 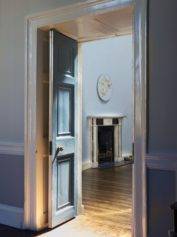 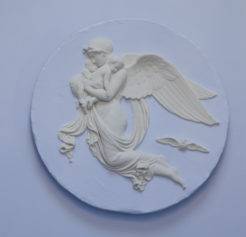 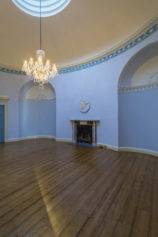 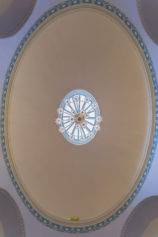 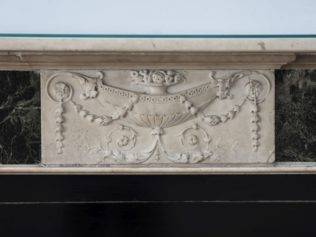 The circular Gothic Room was created as a supper room in 1775 during the reconstruction of the medieval Bermingham Tower. The room’s location directly above the State kitchen made it a convenient place for holding private dinners and serving refreshments during balls. With its pointed arches and Gothic forms, it is architecturally significant as the earliest example of the Gothic Revival style in a State building in Ireland. On display in this room is a remarkable collection of sixteenth-century religious and mythological paintings on loan from the Schorr Collection.

St Patrick’s Hall is one of Ireland’s greatest ceremonial rooms. It was developed in the mid-eighteenth century as the Castle’s ballroom. In 1788, the Italian artist Vincenzo Waldré began work on the painted ceiling that survives today as the most important scheme of its type in Ireland. The hall was for many years the meeting place of the Knights of St Patrick, Ireland’s chivalric order of knights whose flags still adorn its walls. Over the years it has been used to entertain some of Ireland’s most prominent State visitors including John F. Kennedy, Princess Grace of Monaco and Queen Elizabeth II. Since 1938 it has been the setting for the State’s most significant ceremonial occasion, the inauguration of the President of Ireland. 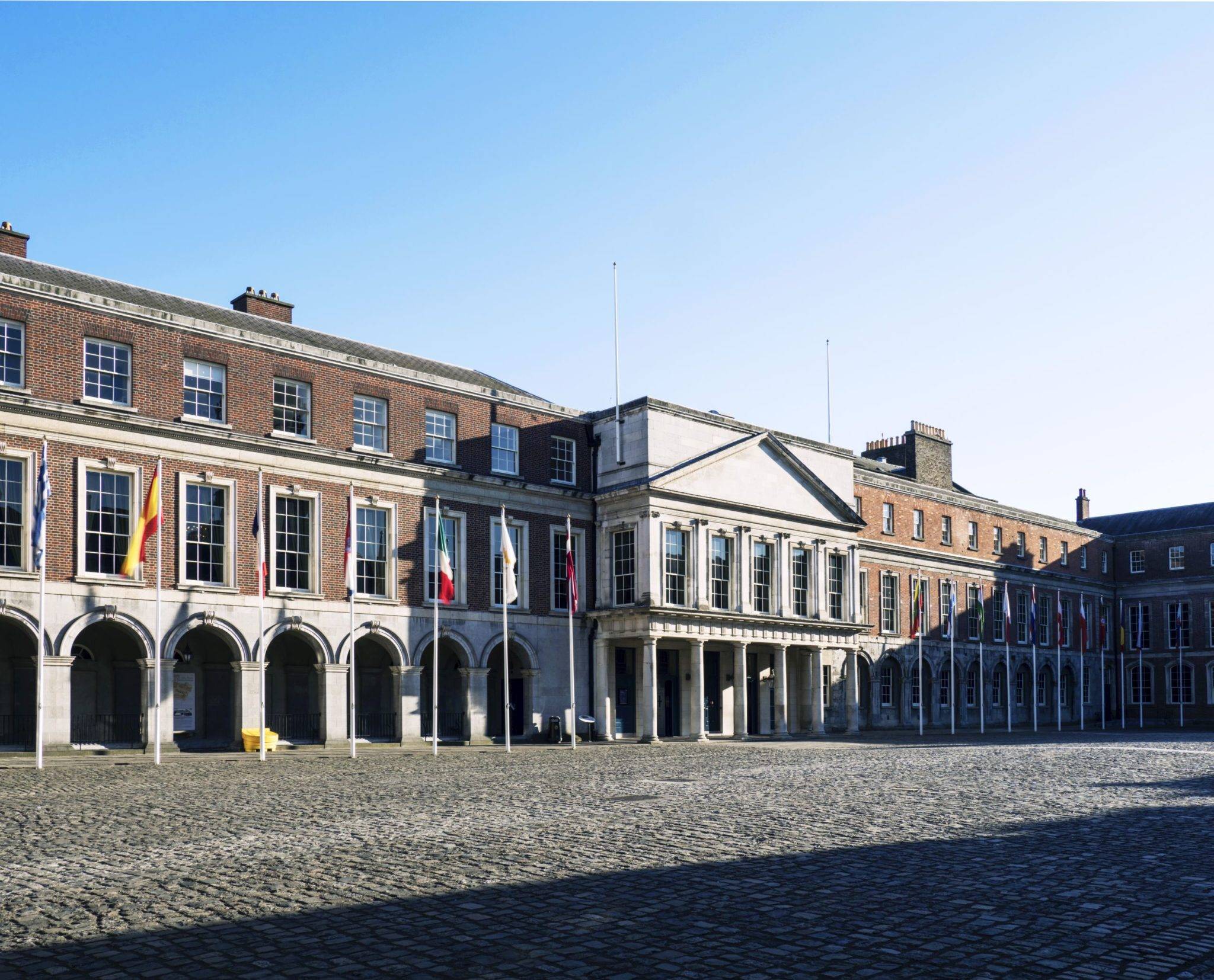