The State Drawing Room has a complex architectural history. The north facing rooms of the south east range overlooking the Upper Castle Yard were originally built by the Surveyor General, William Molyneux, in 1687-1688. According to Euclid Alfray’s plan of the piano nobile dated 1767, the space now occupied by the State Drawing Room consisted of a series of smaller late 17th century State Apartments which had been remodeled in the early 1750s by the Surveyor General, Arthur Jones Neville. In the 1830s the Board of Works architect Jacob Owen amalgamated three of these rooms to form a new seven-bay State Drawing Room with a screen of Corinthian columns at the east end. Most of the original decoration of the room such as the ceiling roses, cornices and Corinthian capitals were made of papier-mâché. These were manufactured by Charles Frederick Bielefeld of London who had previously provided cornices and consoles for St James’s Palace. The room as seen in late 19th century photographs, lacked the formality of a State Drawing Room and had all the appearance of a comfortable and cluttered Victorian bourgeois interior. Jacob Owen’s interior was destroyed in the fire of February 1941. 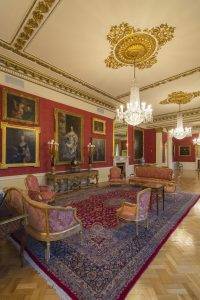 The present State Drawing Room dates from the reconstruction of the State Apartments in 1964-1968. The original 1830s decoration, such as the cornices, capitals and ceiling roses, which had been made of papier-mâché, were faithfully reproduced in plaster. Jacob Owen’s seven-bay room was expanded to ten bays at the west end with an additional columnar screen to incorporate the space formerly occupied by the old Presence Chamber, or Throne Room, which had been destroyed in the fire. A number of items salvaged from the old State Drawing Room were re-used, these included a handsome pair of late 18th century statuary marble chimneypieces in the Neoclassical style. These mantels, which were installed in the late 19th century, had been removed from the first floor Drawing room of No 5 Ely Place, one of a pair of houses built in the 1770s. The two Victorian gilt chimney glasses and the console tables and pier glasses between the windows also survived the fire and were reused. 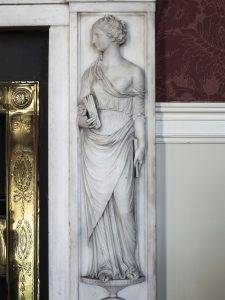 The room as it appears today is furnished with a mixture of 18th and 19th century furniture, much of it French, and from the bequest of the 9th Earl of Granard. The most important painting in the room also formed part of the Granard Bequest, it is the full length portrait of Elizabeth Lee, Countess of Southhampton by Sir Anthony Van Dyck. This painting, which dates from c.1640-41, is thought to be one of Van Dyck’s last works. Beneath the painting is a large giltwood, Louis XIV style console table surmounted by a garniture consisting of a matching Louis XVI style clock and candelabra with grey marble and gilt bronze mounts. Van Dyck’s portrait is flanked by two smaller works by the Irish artist the Rev. Matthew William Peters. That on the left is called The Gamesters and it was painted c. 1785. The painting has been described as a late 18th century version of the famous card-shapers depicted by Caravaggio. Two of the figures in the painting have been identified as Lord Courtney in the center and the cartoonist Thomas Rowlandson on the right.  The other painting by Matthew William Peters is Children with Fruit and Flowers, a finished study for his diploma painting, which he submitted to the Royal Academy in London when he was granted membership in 1778. Both paintings also formed part of the Granard Bequest in 1973. At the west end of the room above a giltwood console table hangs Sir Peter Lely’s imposing full length portrait of James Butler,1st Duke of Ormonde. It was during the viceroyalty of James, Duke of Ormonde that the medieval castle burnt down in 1684. 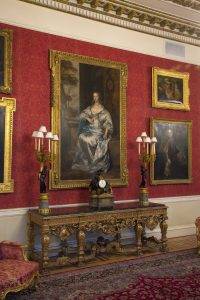 The old Presence Chamber, or Throne Room, which was destroyed by fire in February 1941, was designed by the Surveyor General, Arthur Jones Neville between 1749 and 1751. The room, which was only four bay long, was surprisingly small given its function and was not without its architectural defects. The choice of the Doric order, as opposed to the Corinthian order, for a room of such importance was unorthodox to say the least, and something that few self-respecting second generation Palladian architects would have done. The coved ceiling, though magnificent, was not without its idiosyncrasies. The large foliated roundels on the flat of the ceiling bore little or no relationship to the riot of Rococo stuccowork in the cove below, which consisted of birds, terms and royal insignia. Perhaps the most impressive feature of the room was the handsome pedimented overmantel which surmounted a Scamozzian Ionic chimneypiece. It framed a bas-relief depicting a scene from the life of Marcus Aurelius attributed to the Dublin carver John Houghton. The design was copied from that of the overmantel in the Stone Hall at Houghton Hall as reproduced in The Plans, Elevations and Sections, Chimmeypieces and Ceilings of Houghton in Norfolk, published by Issac Ware in 1735. Fortunately, the overmantel was removed from the room sometime post 1888 and thus survived the fire of 1941. 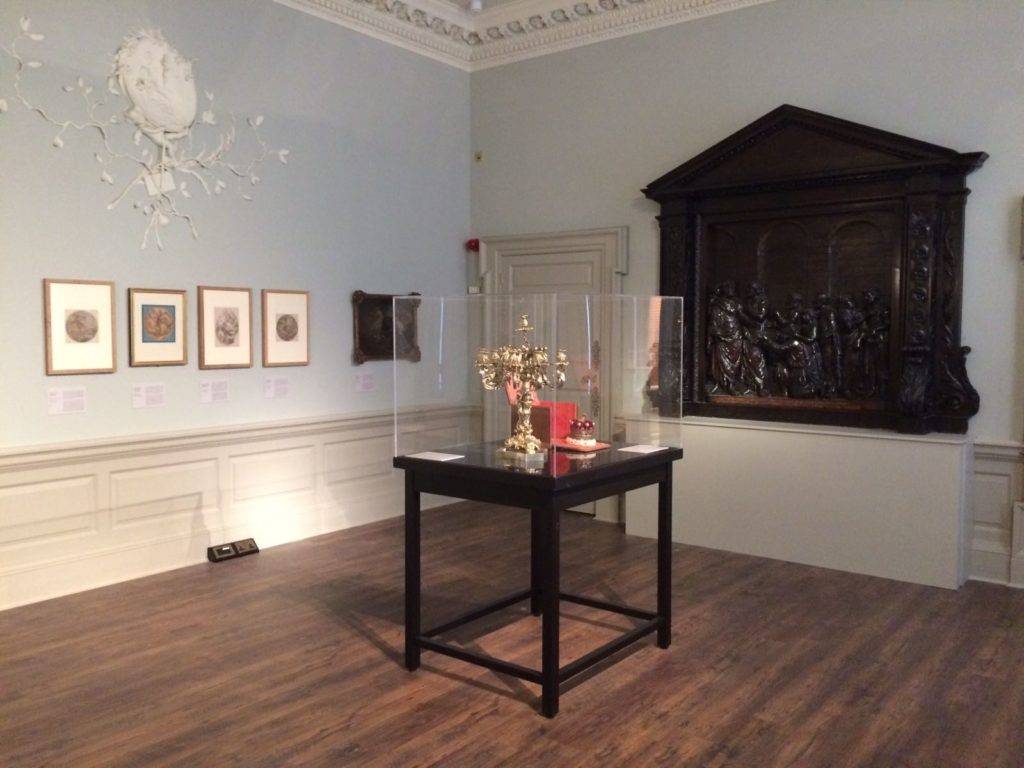 The most important feature in the room was of course the throne which, according to Euclid Alfray’s plan of 1767, stood beneath a canopy and Cloth of State in the center of the east wall. It is unclear whether it was removed when the new Throne Room was created in the late 1780s or whether it remained in place until the 1830s. In any event it had been removed by 1838 and replaced by a pair of double doors which led into Jacob Owen’s newly constructed State Drawing Room. In conclusion, the oddities of Neville’s Presence Chamber, or Throne Room, suggest that it is the work of a gentleman amateur, rather than a professional architect.

The old Presence Chamber, Dublin Castle, as a hospital ward, c. 1915. Courtesy of the National Library of Ireland.