The Theft of the Irish Crown Jewels

The Irish Crown Jewels consist of a star (decorated with Brazilian diamonds, its centre featuring an emerald trefoil and ruby cross on a blue enamel background), a diamond badge and five gold jewel-encrusted collars. The insignia comprises 394 jewels, mostly from Queen Charlotte’s jewellery. Today the Irish Crown Jewels would be valued at several million euro. 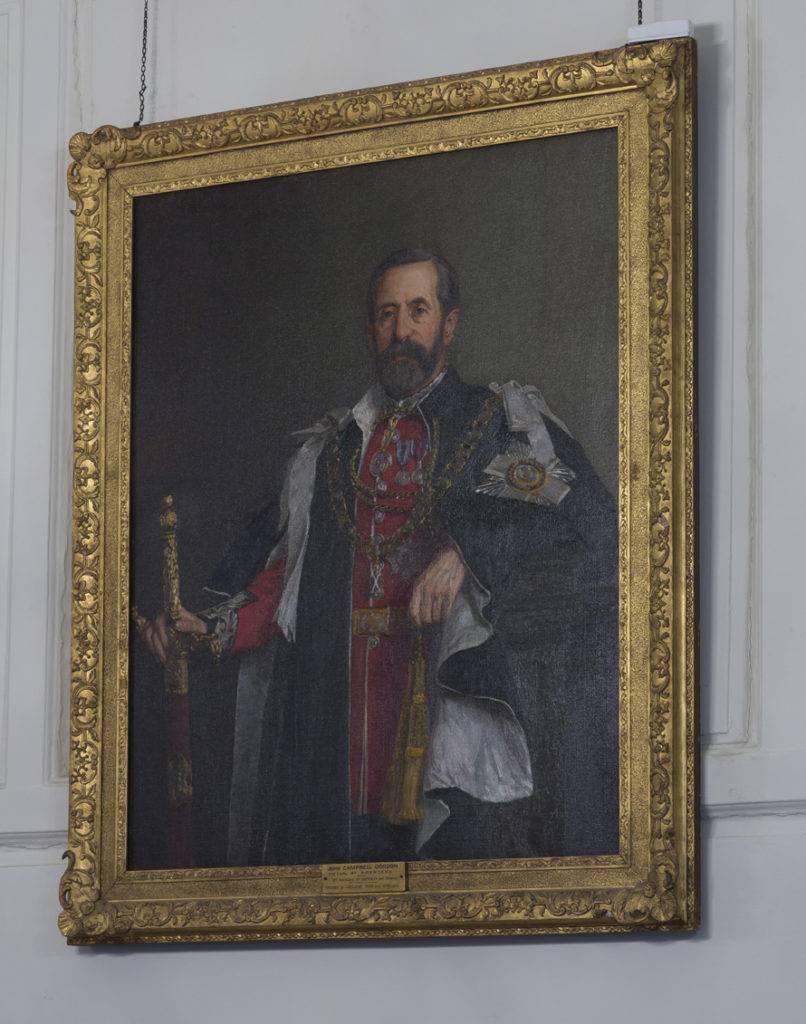 The jewels were discovered to be missing on 6 July 1907. The Times reported that ‘there is no spot in Dublin, or possibly in the UK, which is at all hours of the 24 more constantly and systematically occupied by soldiers and policemen.’ The timing was also significant – they were stolen shortly before the visit of King Edward VII, during whose visit the jewels were to have been used for swearing in Lord Castletown as a new knight of the (Most Illustrious) Order of St Patrick.

The Irish Crown Jewels were not linked to the monarchy, but to the Order of St Patrick, an elite aristocratic order founded in 1783 in the mould of the Order of the Garter in England or the Order of the Thistle in Scotland. The last knight of the Order of St Patrick died in 1974.The regalia were worn by the Grand Master of the Order – who was the Viceroy, the representative of British power in Ireland. At the time of the theft the Viceroy was Joseph Gordon Campbell, Earl of Aberdeen. The jewels were housed in the Bedford Tower, in the Upper Castle Yard, where the Office of Arms was located. This office was responsible for genealogy and heraldry, as well as the safekeeping and care of the state regalia. The Ulster King of Arms, Sir Arthur Vicars, was the one responsible for the office. 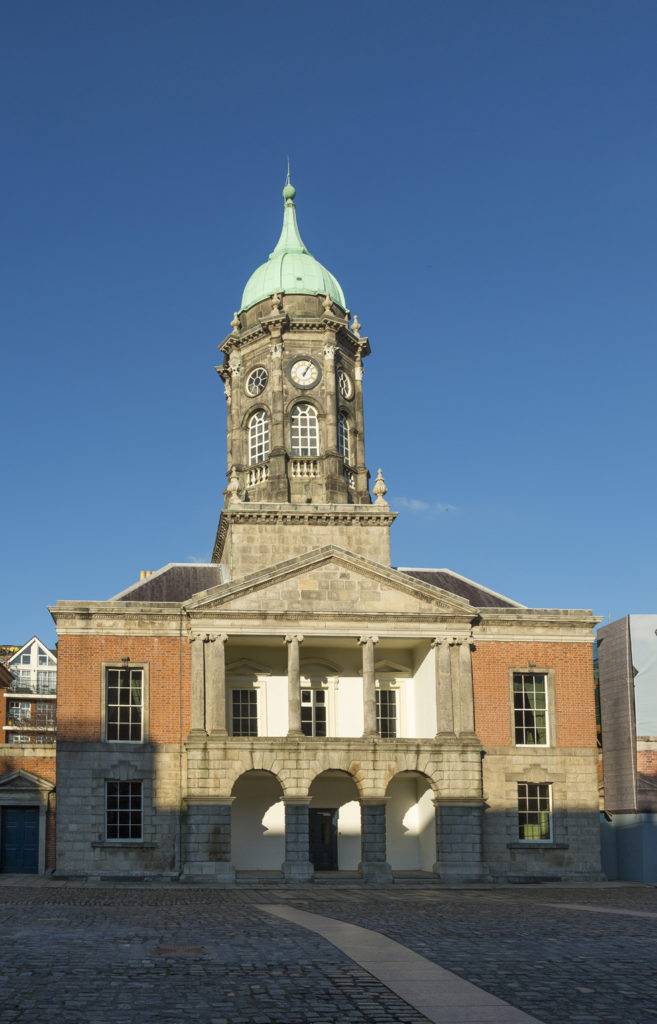 The jewels were housed in a strong room, along with the Sword of State, maces and some of Vicars’ manuscript collection. There were seven keys to the building and two keys to the safe, both of which were in Vicars’ keeping. While the jewels were discovered to be missing on 6 July, they were last seen on the 11 June and in the meantime there was a series of security breaches. The door of the building and the door of the strong room were found open on separate occasions, and Vicars failed to take action. The cleaner, Mrs Farrell, had found an intruder in the strong room. It seems that the culprits returned to leave a trail of clues to ensure the crime was uncovered. The ribbon and clasp of the Badge were left behind, indicating that the thieves were in no rush and perhaps had intended to return the jewels.

The investigation was a prolonged one, taking many twists and turns. Psychics had visions of the jewels which led to fruitless digs in graveyards. Sherlock Holmes author Arthur Conan Doyle, a distant cousin of Vicars, even offered his assistance with the investigation. A reward was offered by Scotland Yard for the any information about the whereabouts of the jewels. 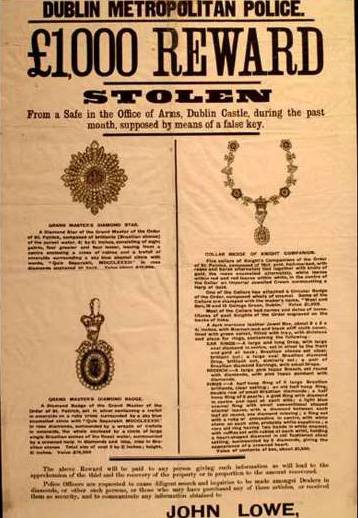 Vicars was accused of being careless in his guardianship of the Crown Jewels. Many people had access to keys to the Tower. On one occasion when Vicars was intoxicated at a party, Aberdeen’s son Lord Haddo took one of the safe keys, stole the jewels and returned them to Vicars by post as a prank. Vicars was also known to show off the regalia to impress visitors.

The prime suspect was Francis Shackleton, brother of the Antarctic explorer Ernest Shackleton. Despite his reputation, Shackleton was in financial difficulty, and had the opportunity to obtain the key and make a copy. He was, however, out of the country at the time of the theft. The fact the lock was not forced has led to the belief that it was an inside job. Another theory is that Shackleton was the mastermind behind the theft, and his associate Captain Richard Howard Gorges (a rather unscrupulous character) carried out the job. One reason why this theory may not have been pursued, and Vicars made a scapegoat, was Shackleton’s homosexuality. Given the circles he moved in, and the fact that homosexuality was considered a crime, the King and Viceroy would have been keen to avoid a scandal. During the investigation rumours were spread about scurrilous parties held at the Castle.

Other theories include that the theft was committed by a republican group or alternatively a unionist group, that Lord Haddo may have been involved, that the theft was arranged by the monarchy and the jewels form part of a badge Queen Elizabeth II wears which features Indian diamonds. This last theory has been disputed by Buckingham Palace. 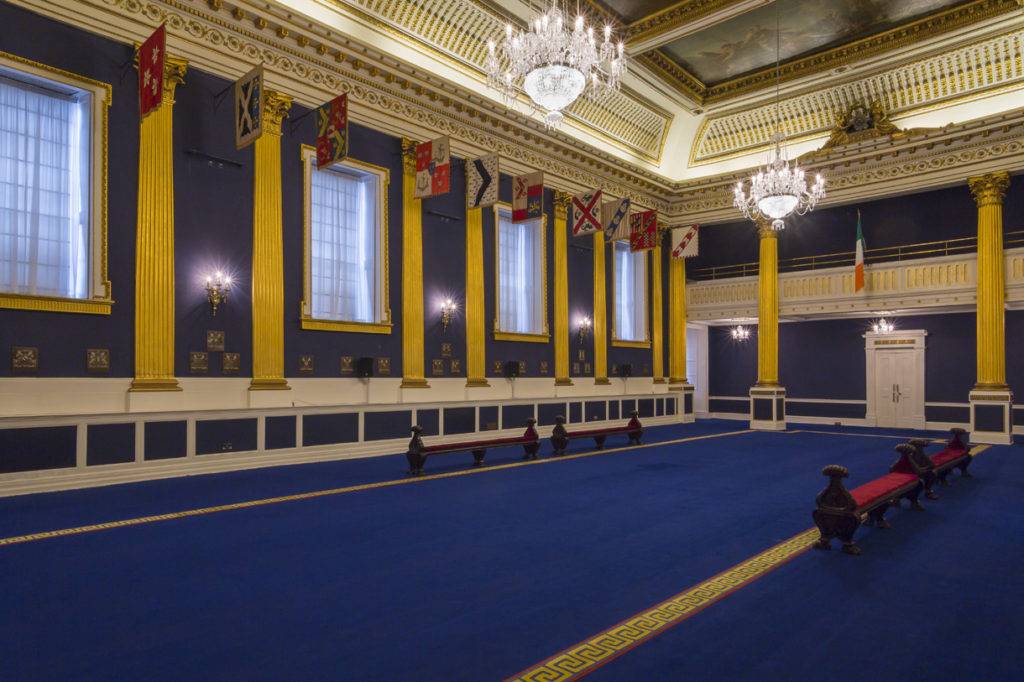 Over the years, there have been a number of false alarms. A jeweller named James Weldon received a letter with extremely precise details about their whereabouts, and identified the person he met as Shackleton. Twenty years later he received another letter which he brought to the attention of then President W.T. Cosgrave, who said ‘They’re ours anyway, so we might as well have them.’ However, they would have become the property of the British monarchy, like the Irish Sword of State.  The jewels have never been recovered, Vicars lost his post, and many of the key players in the events around the theft met tragic ends. To this day, the Irish Crown Jewels remain lost and the mystery unsolved.