Dublin City Hall, previously known as the Royal Exchange, was built between 1769 and 1779. It stands on the site formerly occupied by Cork House and Lucas’s Coffee-House. Following the death of the Great Earl of Cork in 1643 his townhouse was put to other uses. In 1670 an exchange built on columns was erected in the garden of Cork House by the merchants of Dublin. It was a meeting place where merchants met every day to conduct business at the ringing of a bell. The exchange was later moved to the Tholsel near Christchurch Cathedral and when that building became decayed in the mid18th century it was decided by the merchants to build a new purpose built exchange.

The site on Cork Hill was not chosen for sentimental reasons. The Wide Streets Commissioners had in 1757 opened up a new commercial street, called Parliament Street, linking Capel Street, with Cork Hill and Dublin Castle. The Capel Street-Parliament Street axis and the area around the old Custom House, beside Essex Bridge, was the commercial heart of the city. Proposals by the Wide Streets Commissioners to move the Custom House down river and develop a new commercial axis linking Gardiner’s Mall, now Upper O’Connell Street, and College Green were greeted with hostility by the merchants of Dublin.  In an effort to revitalize the old commercial heart of the city, the merchants decided to hold an international architectural competition in 1768-69 to erect a signature building on Cork Hill which would dominate the vista from Essex Bridge and Capel Street and the approaches to Dublin Castle. Fortunately for them, proposals to build a new Chapel Royal on the site had fallen through and with the aid of Dr. Charles Lucas M.P., they bought the site which measured 100 feet square, from the government for the sum of £13,500 in 1765. 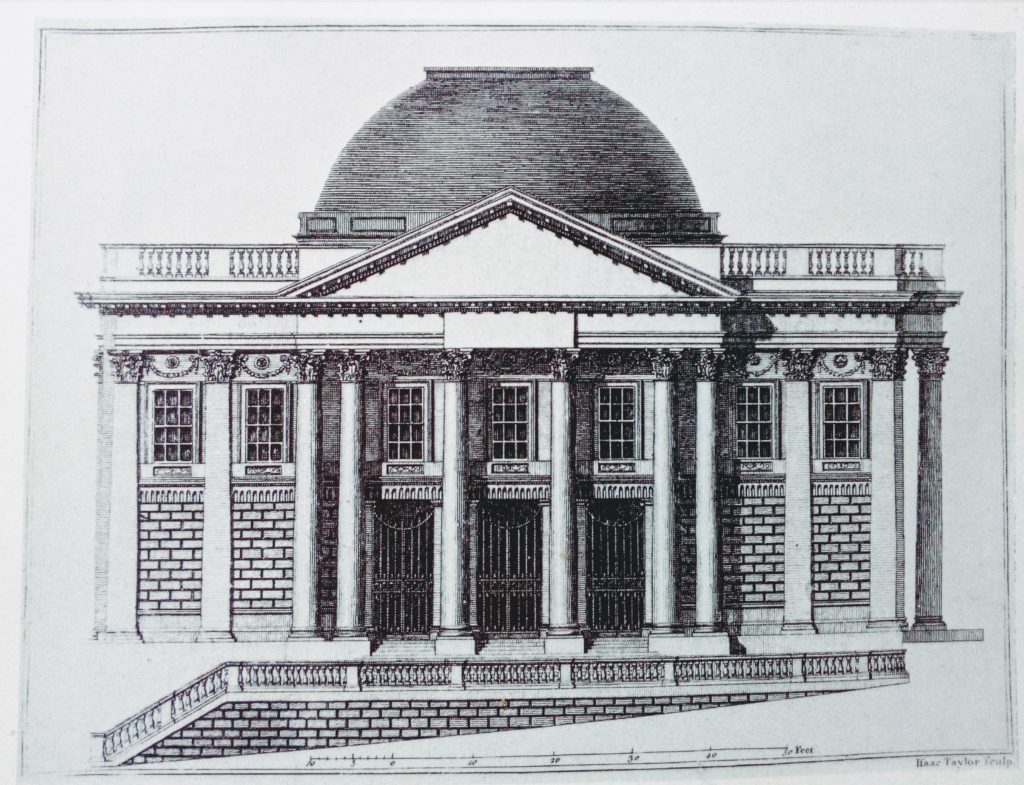 The winner of the architectural competition was an English architect named Thomas Cooley, the runner up was James Gandon who would later build the new Custom House down river. The building which Cooley erected set a new standard of sophistication in Dublin civic architecture, it was to be the very first public building in Ireland built in the Neoclassical style. The cost of building the new exchange was £58,000 of which £40,000 was raised by public lottery. The first stone was laid with great pomp and ceremony by the Viceroy, Lord Townsend, on Wednesday, 2nd of August 1769.

The plan of Cooley’s building is essentially a domed circle inscribed in a square built on a high vaulted podium. There are three facades of Portland stone richly decorated with a giant order or Corinthian columns and pilasters. The principal façade, which faces north towards Parliament Street, is seven bays wide and is embellished with a six columned pedimented portico, the columns each measuring thirty seven feet high. The west façade, which addresses the entrance to Dublin Castle, is five bays wide and decorated with a four columned portico. A minor Ionic order of pilasters flanks the three doors beneath the north and west portico’s. According to the late Maurice Craig, Cooley’s dome, which is best seen from a distance, set a precedent for Dublin’s copper covered domes, thus linking Ireland with Scandinavia rather than with Britain or France, where domes are generally clad in lead. 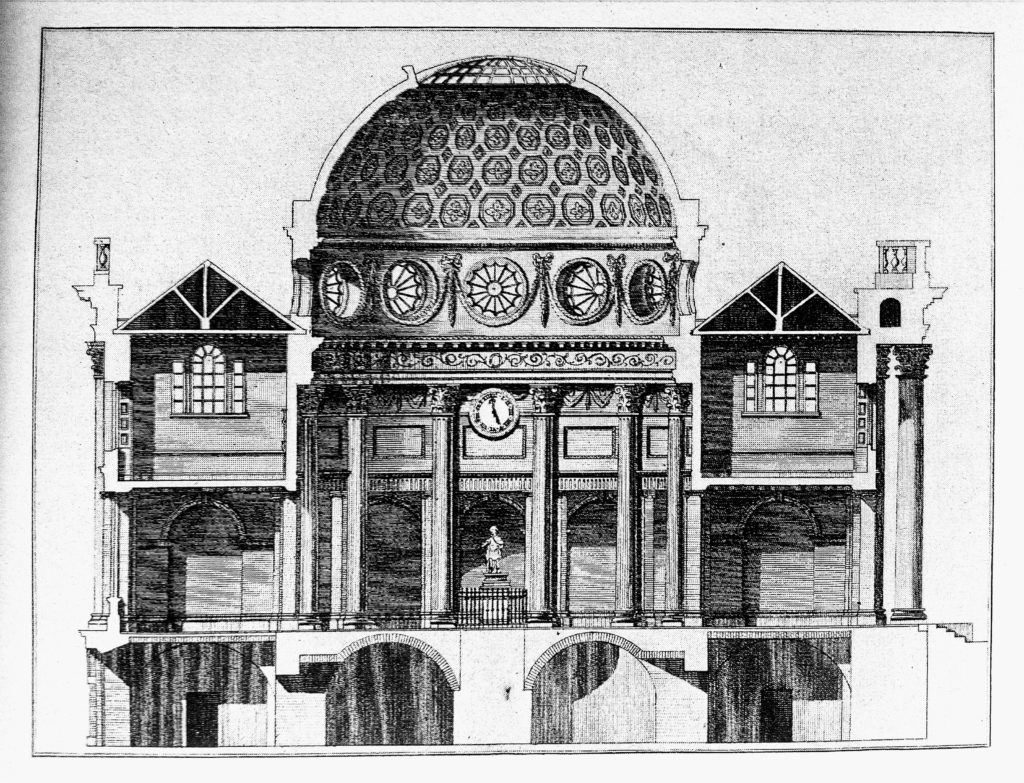 The minor Ionic order used on the exterior of the building was also used internally for the flat ceilinged ambulatory which surrounds the central domed rotunda on four sides. The rotunda measures forty six feet in diameter and is surrounded by twelve giant, fluted, engaged columns of the Composite order, each thirty two feet high. The capitals, and the entablature which surmounts them, are lavishly carved in Portland stone. The carving throughout the building was executed by John Morgan and Simon Vierpyl, who had previously worked on Lord Charlemont’s Casino at Marino. Above the entablature is a drum lit by twelve circular windows decorated with delicate festoons of Laurel leaves. The drum is surmounted by the dome which is decorated with five rows of hexagonal coffers and is lit by a large oculus at its center. The plasterwork here and throughout the building was executed by the Dublin stuccodore Charles Thorp. Thorp, noted for his deeply reactionary views, later entered city politics and served as Lord Mayor of Dublin from 1800-1801. The main entrance on the north front is flanked by two oval top lit staircase halls each illuminated by oval lanterns set in coved ceilings richly decorated in stucco by Thorp. These led to the Coffee Room, the Brokers Office, the Housekeepers Apartments and the Merchants Committee Room, which by the 1790s was occupied by the Wide Streets Commissioners. The Coffee Room, now the Council Chamber of Dublin City Council, was severely damaged by a fire in 1911.

From the time the Royal Exchange was completed in 1779 to the present day the building has become a repository of public sculpture. The first statue erected in the rotunda was that of King George III in Roman military uniform by John van Nost, the Younger. Van Nost, who had previously executed the statues of Justice and Fortitude above the gates of Dublin Castle in 1753, was the obvious choice for this prestigious commission. The bronze sculpture, which was executed at a cost of seven hundred guineas, was presented to the Merchants of Dublin in 1765 by the outgoing Viceroy, the Earl of Northumberland with the intention that it would be placed in the not yet built Royal Exchange. The statue, which stood on a white marble pedestal in the center of the rotunda, is now in the National Gallery of Ireland. The only other sculpture erected in the Royal Exchange in the 18th century was Edward Smyth’s statue of the radical Dublin M.P., Dr. Charles Lucas. Lucas had been instrumental in obtaining a grant from the Irish parliament towards the costs of building the Royal Exchange. This was Smyth’s first commission, executed in 1779. The statue, which now stands at the bottom of the west staircase, originally occupied a niche on the stairs. 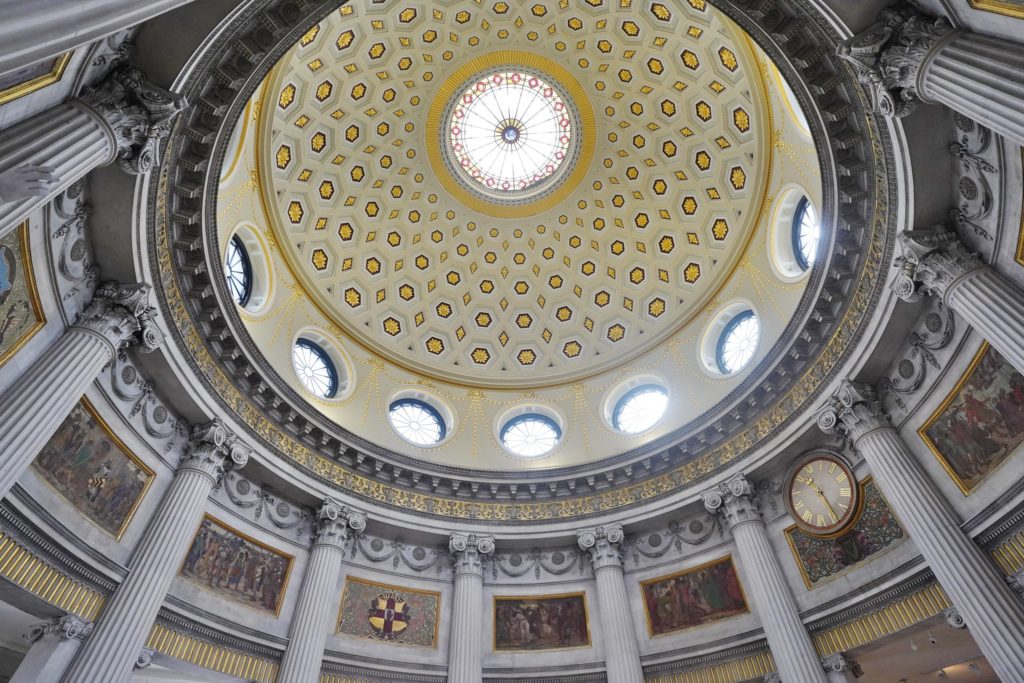 The Royal Exchange, which went into decline due to the adverse effects of the Act of Union in 1801 and the amalgamation of the British and Irish currencies in 1825, was acquired by Dublin Corporation in 1851.  After the building was renamed City Hall on 30th September 1852, the number of sculptures grew. John Hogan’s statue of Daniel O’Connell (1843), Dublin’s first Catholic Lord Mayor since the Reformation, was moved into the rotunda having previously stood outdoors. Likewise, due to weathering, Hogan’s statue of Thomas Davis (1852), was moved to the rotunda of the City Hall in 1922.

In conclusion, it can be said that Dublin City Hall is the earliest and one of the finest examples of monumental, Neoclassical, civic architecture in Ireland. Cooley’s Royal Exchange set a very high standard for public architecture in Dublin. He led where Gandon followed with his new Custom House and Four Courts in the 1780s and 1790s.