The Pope in Ireland, Then and Now

I remember when I moved to Dublin in 2006 I would go running in the Phoenix Park and think to myself how strange that they had randomly erected a cross in its centre. It was only a few years later I found out about Pope John Paul II’s historic mass there on the 29th of September 1979, which was attended by one in three Irish people, making it the largest gathering of Irish people in history. As we prepare for an undertaking of a similar scale on the 25th of August (and the largest gathering of Irish people in my lifetime), it feels like an appropriate time to reflect on the scale of that event in 1979 and how this compares to the upcoming visit.

Pope John Paull II arrived for his three-day visit to Ireland on a specially chartered Aer Lingus 747 (the first time a pope had flown on a carrier other than Alitalia). The flight performed a flyby of the park on its approach to Dublin Airport to allow the Pope to get an aerial view of the site and the gathering masses. After landing, he travelled by helicopter to the site of the mass. 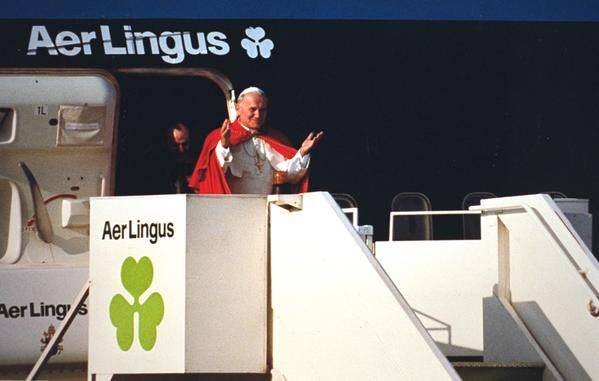 The Pope disembarks St. Patrick, the first time the pontiff flew a carrier other than Alitalia

During the mass the Pope drove through the crowd in a specially constructed Popemobile. The 6.3km route took 47 minutes to complete and allowed many in the congregation to get a much-coveted closer look at the Pope. 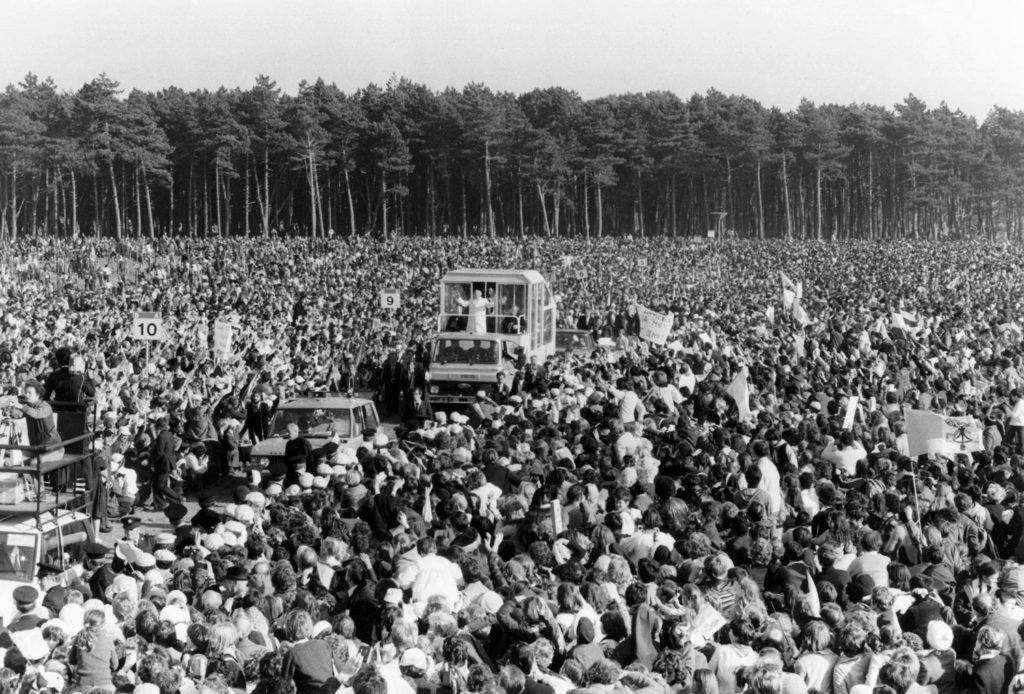 The Popemobile moves through the crowd

The design of the open-air ‘church’ for the visit of Pope John Paul II to Dublin fell to Ronnie Tallon of Scott Tallon Walker Architects. The commission required the design and construction of facilities for more than 1 million people on a 73-hectare site in the Phoenix Park within 10 weeks. It is worth pointing out that this was a site that had no existing facilities – power, water, telecommunication lines all had to be installed within this short time. Early on in the planning process, Tallon and his team walked the perimeter of the site. They were acutely aware that many of those in attendance would see the Pope as no larger than a small figure in the distance and so they decided something was required – a focal point – clearly visible for the entire congregation. They decided to erect a high cross constructed with steel beams to serve this purpose. The height of the cross had one unavoidable limitation, however, namely the reach limit of the largest mobile crane available in Ireland at the time: 35 meters. 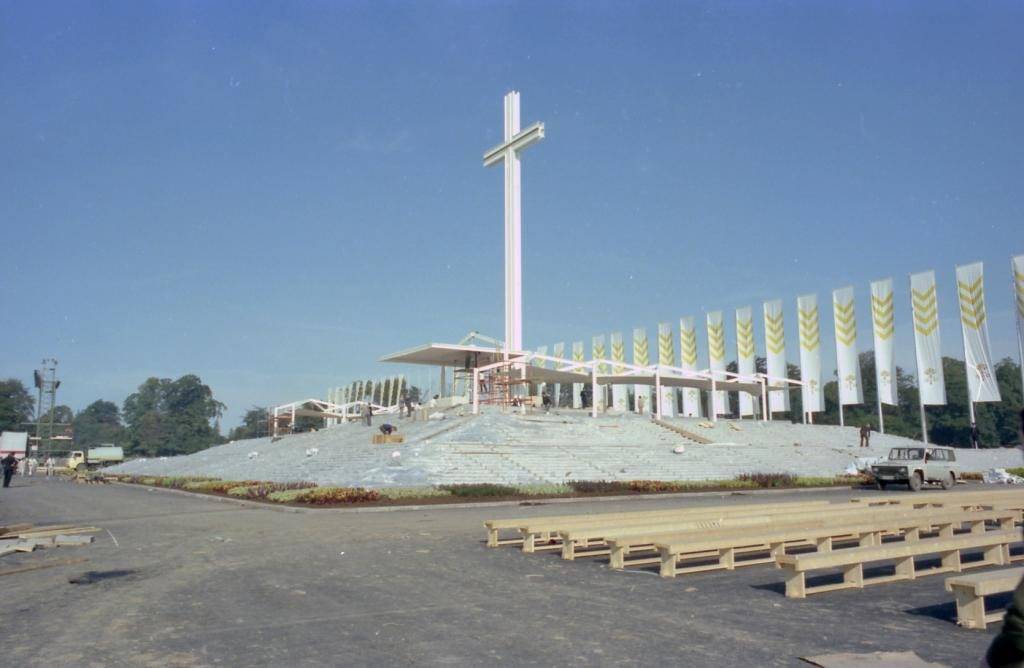 The stage with papal cross and Patrick Scott banners

The backdrop of the stage was formed by sixty 10 meter by 2 meter banners designed by Irish artist Patrick Scott. The cloth for the banners was made on large mills in Manchester, while the sewing was done in various convents around Dublin. The altar was 6 meters long and sat atop a grass mound with steps to all side (the mound, minus the steps, is still there today). The carpet for the stage was made by Des ‘The Carpet Man’ Kelly (a name familiar to many Dubliners to this day). Underneath the mound is buried a reinforced concrete box which served to support the altar and cross but also as a rest and robing room for the Pope. The idea of the buried box (with its obvious connotations) was one of the more intriguing facts I discovered during the preparations for the 2018 visit.

While the mass this time around in the Phoenix Park will not reach the astounding numbers of 1979, the scale of the undertaking is even greater in the age of strict health and safety guidelines and welfare requirements. The Pope will also visit Dublin Castle during this trip, where he will meet with authorities, members of civil society and the diplomatic corps. On his way to meeting them, he will traverse a courtyard that bore witness to the celebrations marking the passage of the same sex marriage referendum in 2015 and the recent repeal of the Eight Amendment of the Constitution (paving the way for abortion in Ireland) and he will be welcomed by our first gay Taoiseach. This passage, I think, will encapsulate in many ways the new Ireland this pontiff is visiting. However, having learned more about the scale of the events of 1979 and that mass in the park, the next time I am at the cross I intend to scale the steps and rest my hand on those steel beams; not because I’m religious, but because an indelible moment in Irish history occurred there on the 29th of September 1979 and will again on the 25th of August 2018.