The Neapolitan Crib at the Chapel Royal: Interview with artist Bruno Perchiazzi

This Christmas season, visitors to Dublin Castle will once again be able to see an eighteenth-century-style Neapolitan Crib in the peaceful surroundings of the Chapel Royal. In October I interviewed Bruno Perchiazzi, the creator of the architectural setting of the Dublin Castle crib. He was very generous with his time and knowledge and I do hope, as I originally interviewed him in Italian, that his tremendous and genuine enthusiasm for such an art form has not been lost in translation. 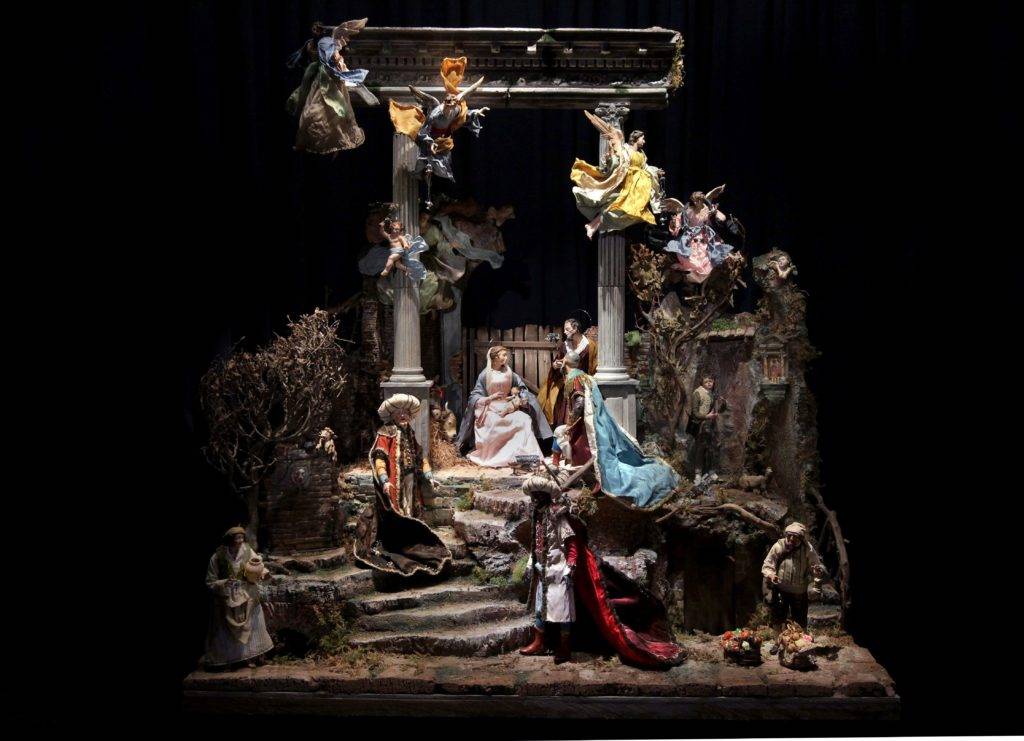 The Neapolitan Christmas Crib at the Chapel Royal: ‘The Manger’ Scene

AG: Bruno, you are one of the best-known representatives of the Neapolitan art of the Nativity Scene. How did your interest in Nativity scenes begin?

BP: Nativity scenes have been an established tradition among Neapolitan families long before becoming a work of art or an historical document and attracting the attention of international museums. It is no coincidence that the play Christmas in the Cupiello Home by Neapolitan playwright Eduardo De Filippo revolves around the protagonist’s fixation with the Nativity preparation.
My very first encounter with this tradition occurred within my family: my father, a self-taught artist, used to make papier-mâché cribs with very limited resources, skilfully transforming a glob of water and glue into mountains, rivers and houses. While he was modelling, my brother and I were given the task of keeping an eye on the glue or I should say glues, as besides the one made with flour that needed to be stirred constantly to avoid lumps forming, there was also the more expensive fish glue. One of my earliest childhood memories is of my father picking my brother and myself up (I was five so my brother must have been seven) and seating us higher up so that we could see the Nativity scene coming to life. Once the backdrop was ready, we moved on to arrange the figurines that had been carefully preserved from the previous years.
The year was 1951 and Naples was still suffering from the devastation caused by the Allied bombing raids that had reduced civilian houses to rubble and ash. As a result, at Christmas time the Nativity scene would become for us kids, who didn’t have that much space not to mention toys for indoor play, a truly extraordinary and fantastic play experience. The Nativity scene would allow us to enter a fantastic world populated by shepherds tending sheep scattered in the countryside, slackers killing time in the tavern, and kings getting close to the manger. The cavalcade of exotic animals accompanying the Three Wise Men made us children feel like we were in a fairytale land, while the contemplation of the stable, where the ox and the donkey were warming the Holy Child with their breath, helped us forget about the post-war miseries and privations. 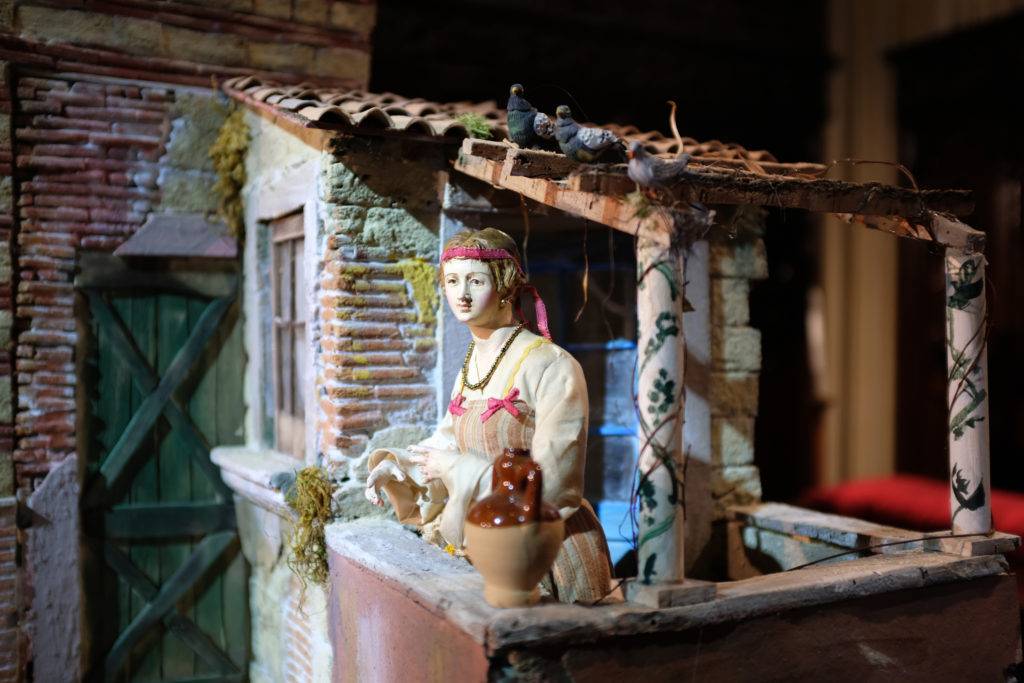 The Neapolitan Christmas Crib at the Chapel Royal: landlady from ‘The Tavern’ scene

AG: And how did this fascination develop from there?

BP: When I became a father myself, I continued the family tradition. As I found myself a quite talented amateur, I joined the “Associazione Italiana Amici del Presepio di Napoli” (the Italian Association of Friends of Neapolitan Cribs). It was there that I met experienced masters of the Neapolitan Nativity tradition and had the opportunity to perfect old techniques and learn new ones.
Since then I have been making eighteenth-century-style Neapolitan cribs which have been exhibited all over the world. Some cribs, such as the one for Dublin Castle, have stayed abroad and now are testimony to this Neapolitan tradition and craftsmanship of the highest order. 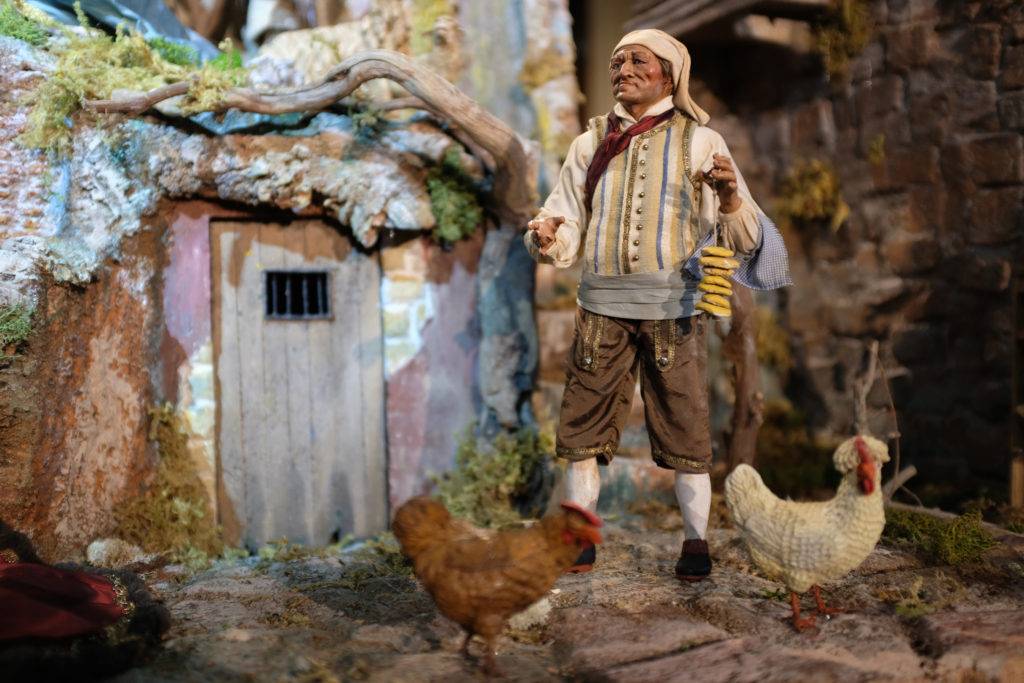 The Neapolitan Christmas Crib at the Chapel Royal: market man from ‘The Tavern’ scene

AG: Could you please guide us through the different phases involved in the realisation of your nativity scenes?

BP: Ideas can arise spontaneously or be suggested by a patron. Sometimes, I might be struck by a particularly suggestive view while visiting archaeological sites or strolling around picturesque villages which I will then use for a scene. Other times, the patron has a particular view close to his own heart and asks me to include it in the Nativity scene.
Regardless of the design and size of the project, a traditional Neapolitan Nativity scene, to be considered complete, has to include:

Around these scenes a whole series of popular characters, such as shopkeepers and street sellers, hang out. They were introduced during the 1500s by Saint Cajetan of Thiene who, arriving in Naples and discovering that the city was not exactly a godly place, thought of using them as a way to trick the common people into looking at the sacred figures as well. Since then, the Neapolitan crib has become an account of everyday life to the extent of including figurines of modern athletes, politicians and celebrities. 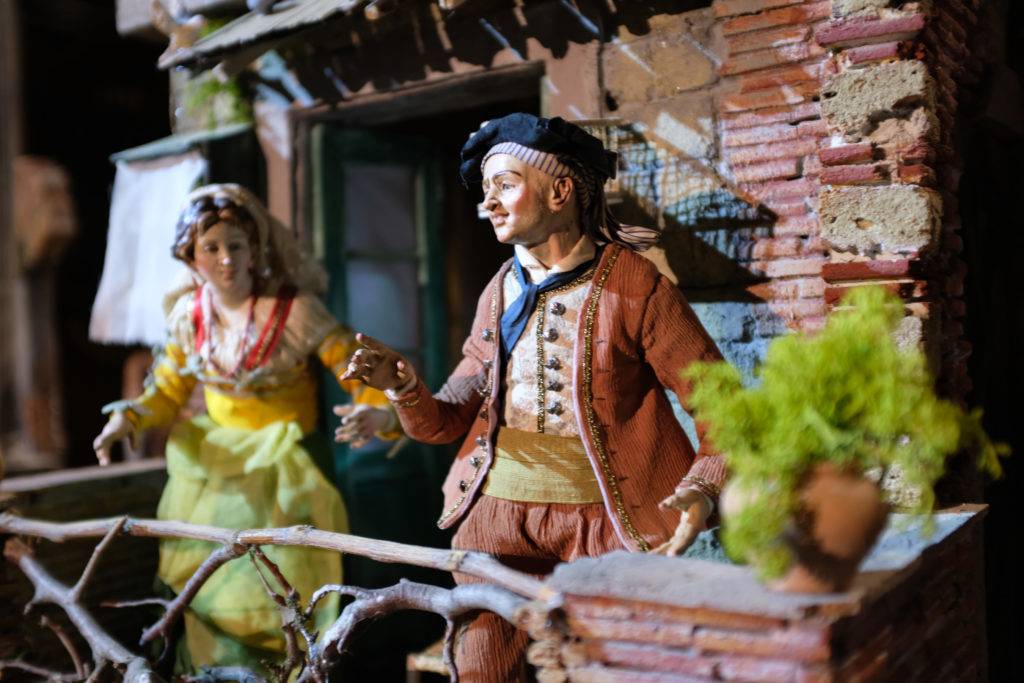 The Neapolitan Christmas Crib at the Chapel Royal: figurines from ‘The Tavern’ scene

AG: So many characters make for such a lively setting, but is there a scene or a character that you cherish above all others?

BP: The scene that stimulates my creativity most is the one of the Tavern because it is the strongest in terms of human characters, and the richest in terms of objects of traditional rural culture. Besides, being situated above or in the corner of another building, it allows me to create a microcosm of doors, windows, balconies and terraces, which are all buzzing with people and animals. All these bustling street activities make a truly bright and colourful show. Also the objects – the greengrocer’s fruit and vegetables, the butcher’s meats and charcuterie, the fishmonger’s fish and seafood, all modelled in wax and painted in oil – are not only a feast for the eyes but also a display of artistic techniques. You can also add to a tavern scene as many characters as you like, such as a dancer twirling around the dining tables, a drunkard leaning on a barrel, a boy pickpocketing one of the customers, a cardsharp playing at one of the tables. All dubious characters who make the scene so much rowdier!
I’m afraid my enthusiasm for the Neapolitan Nativity Crib is so immense I could keep talking about it for hours, but I think and hope that what I have said so far is enough to attract our readers’ interest and persuade them to visit the Neapolitan Crib at The Chapel Royal during the coming weeks.