The Irish Sword of State

The Irish Sword of State that we know today is a remarkable object, both as a work of craftsmanship and as a tantalising witness to history. As representations of power, derived from military ability, swords as symbols have a long history. Traditionally swords of state were borne before a king or queen as a symbol of their power. Later they evolved to become representations of a monarch in their own absence. It is in this way that the authority of the kings and queens of England, and later of Britain, was symbolically represented in Ireland. 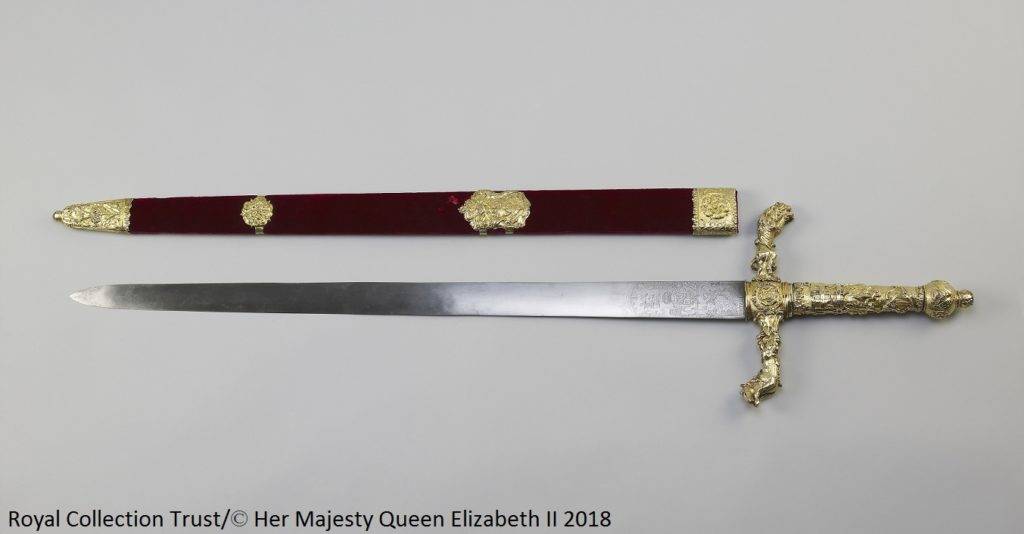 Such swords appear early on in Ireland. Famously, “Silken Thomas”, son of Henry VIII’s viceroy, the 9th Earl of Kildare, threw down the Sword of State as he renounced his allegiance to the King in 1534. The Sword of State (possibly the same one) appears later, in 1581, in an image of the Viceroy, Sir Henry Sidney, receiving the submission of Turlough Luineach O’Neill.

Turlough Luineach O’Neill submits to Sir Henry Sidney. The Image of Irelande by John Derrick, 1581. Courtesy of the National Library of Ireland.

What happened to the Sword of State shown in 1581 is not known. In the decades following its depiction, which brought the Nine Years War, the English Civil War and the Cromwellian Plantation, it was likely lost, stolen or otherwise disposed of.

In May 1660, King Charles II was restored to the throne. Almost immediately, work began on reinforcing the new king’s position in the public imagination. Among the variety of furniture, furnishings and symbolic objects intended to create a majestic image of the restored king, a warrant dated 7 August 1660 includes the order for a new “Kings Sword” which was “to bee provided for his Maties [Majesty’s] Service in Ireland”.

A surviving bill indicates that this Sword of State was made by the goldsmith George Bowers, who was paid for “… a rich hilt for the sword of Estate for Ireland weighing seaventy eight ounces”. One “William King of London” was also paid “… for putting in a very good old blade into ye hilts”, suggesting a certain amount of economy on behalf of the new king.

The sword was ceremonial and was intended to be carried in procession, in front of the viceroy, with the point in the air. The decoration reflects this, with the engraving on the blade and the symbols on the hilt designed to be seen this way up. Notable among these designs is an uncrowned harp on the grip or handle, representing Ireland, while the cross guards take the form of a lion (representing England) and a unicorn (representing Scotland) – which has sadly lost its horn. 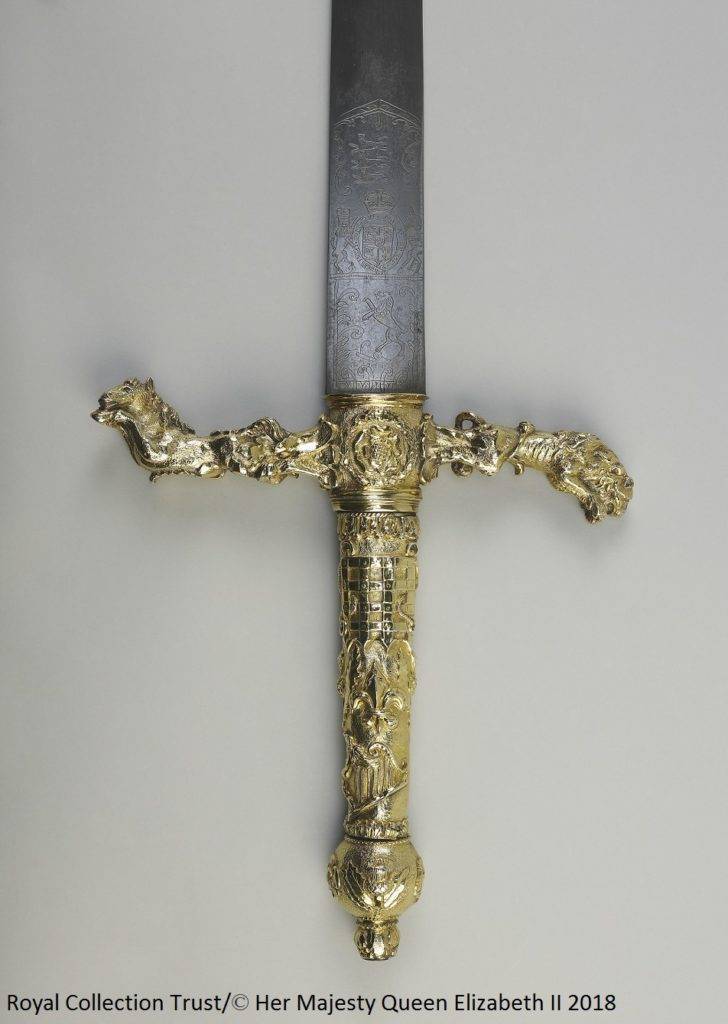 The Sword of State arrived in Ireland at the end of 1660 or start of 1661. As the ultimate symbol of royal authority, it was presented to each viceroy upon his investiture at Dublin Castle, representing the power he then yielded on behalf of the king or queen. It was carried before him in formal processions through the streets, it was present at formal ceremonies over which he presided and, on the rare occasion when a monarch visited Ireland, the viceroy would return the Sword, and the power it symbolised, to them. When King James II arrived in Dublin in March 1689, he was presented with the Sword as he entered the city, which he then handed to his viceroy to carry before him as he processed to Dublin Castle.

The Sword survived the confusion and destruction of the Williamite Wars to settle into a life of relatively uneventful, ceremonial usage. When not in the safe-keeping of the Chief Secretary for Ireland or of the Ulster King of Arms, it usually sat across the throne in the Throne Room of the Castle on two small tendrils specifically designed to support it. However, it was not always the focus of formal ceremonial.

The Throne Room, Dublin Castle, 1867–1902, detail showing the Irish Sword of State. Courtesy of the National Library of Ireland.

My brother and I were not allowed in the throne-room on ordinary days, but it offered such wonderful opportunities for processions and investitures, with the sword of state and the mace lying ready to one’s hand in their red velvet cradles, that we soon discovered a back way into it. Should any of the staff of Lord French, the present Viceroy, care to examine the sword of state and the mace, they will find them both heavily dented. This is due to two small boys having frequently dropped them when they proved too heavy for their strength, during strictly private processions fifty-five years ago. I often wonder what a deputation from the Corporation of Belfast must have thought when they were ushered into the throne-room, and found it already in the occupation of two small brats, one of whom, with a star cut out of silver paper pinned to his jacket to counterfeit an order, was lolling back on the throne in a lordly manner, while the other was feigning to read a long statement from a piece of paper. The small boys, after the manner of their kind, quickly vanished through a bolt-hole.

Some of those visitors from the Corporation of Belfast may have been present when the Sword made one of its last formal outings, in June of 1921. In that month, the new Parliament of Northern Ireland was opened, in Belfast City Hall, by King George V. The Sword made its way to Belfast and a painting of the event records it being held, point upwards, by the Ulster King of Arms, Sir Nevill Wilkinson. Sadly, no such record exists of the Sword’s departure from Ireland in 1922. It was likely packed up shortly after 5 December of that year, when the state of Southern Ireland ceased to exist and the Irish Free State came into being. It was taken to back to Britain and, in 1959, it was placed in the Jewel House of the Tower of London. 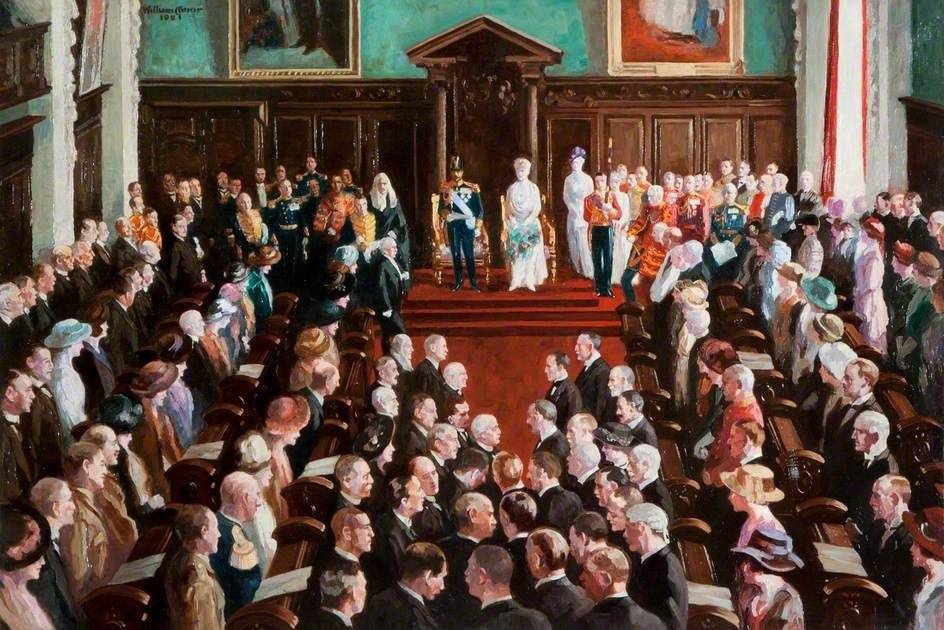 The State Opening of Parliament by William Conor, 1921. Courtesy of the Northern Ireland Assembly.

After ninety-five years, the Irish Sword of State returned to Ireland in September 2017. It was loaned by Her Majesty Queen Elizabeth II and the Royal Collection Trust to the Office of Public Works as part of the exhibition, Making Majesty. No longer a symbol of British dominion, it has returned instead as a symbol of the shared cultural heritage of Britain and Ireland. Although still invested with the ghosts of history, it sits today in a display case in a gallery and not across a throne in a throne room. It will remain there for all to scrutinize and contemplate until the exhibition closes on 28 April 2018.