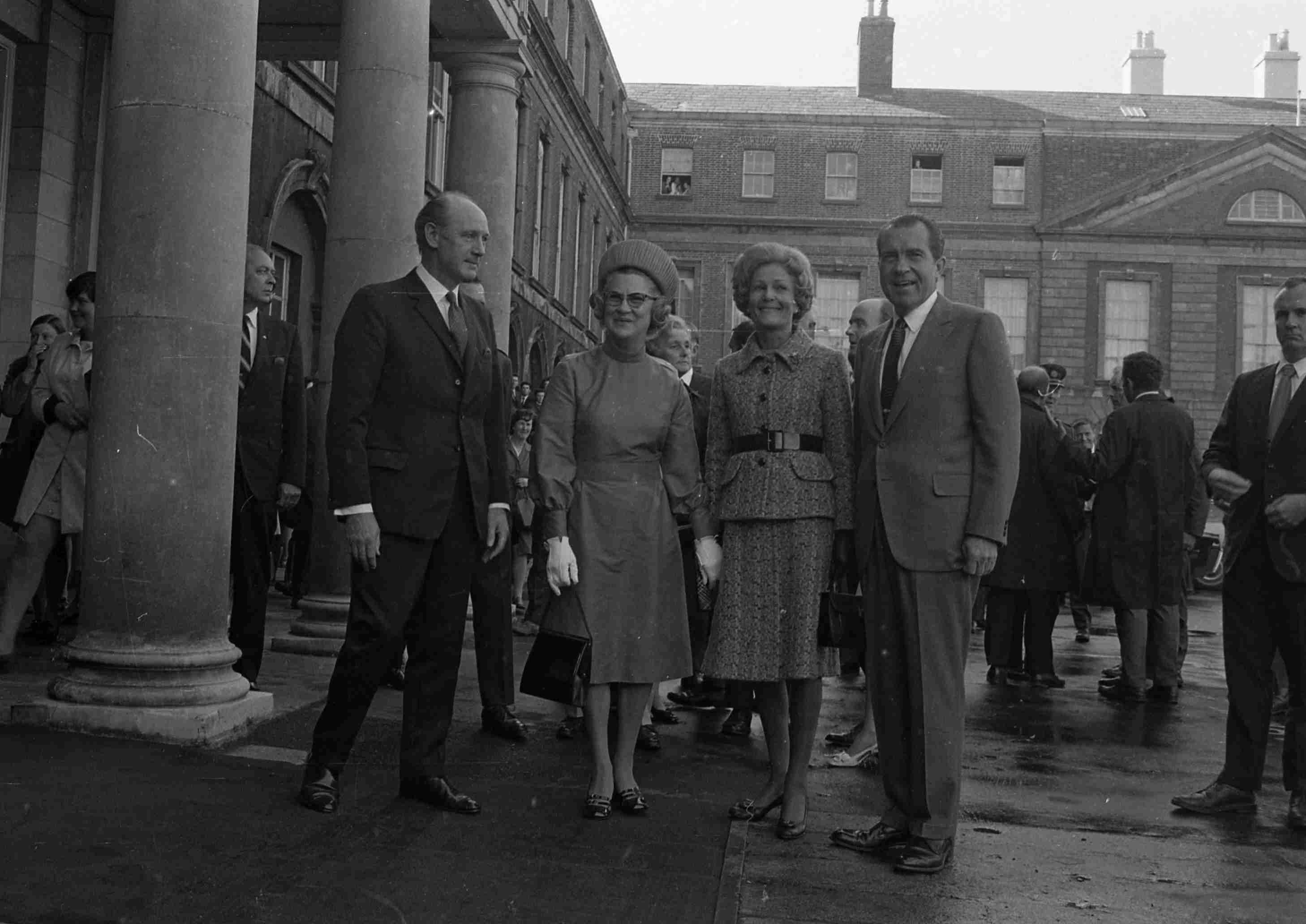 American President Richard Nixon at Dublin Castle for a Luncheon held in his Honour, with An Taioseach Jack Lynch, circa October 1970 (Part of the Independent Newspapers Ireland/NLI Collection).

For centuries now, Dublin Castle has played host to many visitors from around the world. These visitors included royalty, presidents, prime ministers, poets, writers, athletes and other key figures. The exhibition ‘Famous Faces’ offers visitors a glimpse into some of the key state and political figures who have graced the halls of Dublin Castle since the 1960’s. They include Princess Grace of Monaco 1961, President John F Kennedy 1963, President Richard Nixon 1970, The New Ireland forum 1983-84, President Ronald Reagan 1984, Nelson Mandela 1990, EEC Summit 1990, President Bill Clinton 1995, Queen Elizabeth II in 2011, Vice-President Joe Biden 2016, Pope Francis 2018, and Speaker of the House of Representatives, Nancy Pelosi 2019.

The visit of US President Richard Nixon in 1970 has often been described as “The forgotten visit”. He visited Ireland to draw attention to his Irish roots, however he encountered a very different Ireland to the one that President Kennedy encountered  back in 1963. The political landscape had changed dramatically. On October 3rd, 1970, US President Richard Nixon and his wife Pat made an official visit to Ireland. The couple arrived at Shannon Airport, and they spent two nights at the luxury Kilfrush House in Co. Limerick. Kilfrush House was at the time, owned by Irish-American businessman John Mulcahy who was also a close friend of the Presidential couple. Zeta Hayes was manager of Kilfrush House in Co. Limerick when Nixon stayed there. In a 2010 article written by the Irish Examiner, she remembers the event fondly, down to the details of the rather large menu served to the Nixons at a banquet held at the house. She recalls that Nixon was treated to the best of Irish food with a menu that included Irish smoked salmon, Clew bay oysters, Aran scallop soup, consomme with sherry, steamed Comeragh salmon with Hollandaise sauce, Cecilstown pigeon crust pie, boiled Limerick bacon and cabbage, lamb stew and fillet of Irish beef and baked potatoes.

Zeta also talks about the security detail, “Even before it we had a lot of security. They came “They were all over the grounds. In the kitchen, the night of the formal dinner, we had two guys tasting the food. There were two more guys at the bottom of the stairs leading down to the wine cellar and they were allowing nobody down there”. They checked every bit of the house, every wardrobe; they climbed on top of everything and were all over the place. When he actually came himself, we had a secret service outside his bedroom, a secret service man on the return of the landing, one at each end of the stairs and they changed positions every 15 minutes”, she recalls. On the final day of his visit, the President travelled to Hodgestown, near Timahoe in Co. Kildare.  This is where his mother Hannah Milhous’s ancestors were buried. At Timahoe, President Nixon was presented with documentary evidence of his Irishness by Quaker historian Olive Goodbody.

On leaving Timahoe, the Nixon motorcade went on a tour of Co. Kildare towns including Newbridge, where throngs of people gathered around the presidential car. The entourage moved next to Dublin where President Nixon met with President Éamon de Valera at Áras an Uachtaráin. Before departing for Dublin Airport, the Nixons travelled to Dublin Castle to attend a luncheon hosted by An Taoiseach Jack Lynch and his wife Máirin.The luncheon menu consisted of for starters, fresh Dublin Bay prawns with mayonnaise, main course: roast fillet of beef with bordeaux sauce served with béarnaise potatoes, broccoli in butter and for dessert, frozen mist souffle and confectionery. The luncheon was held in St Patrick’s Hall.

My ‘Famous Faces’ exhibition is a trip down memory lane for the visitor where one can recall the occasions when significant political treaties and agreements were signed, hands were shaken, speeches were made and at times, glitz and glamour ensued at banquets and dinners. The visitor can witness the positive impact many of these visits had on Irish society and how Ireland got an opportunity to be showcased onto the world stage. I have also incorporated a collection of archival clips into the exhibition which bring these famous visits to life.

I invite you to visit my exhibition and to celebrate and enjoy these memorable, historic occasions at Dublin Castle.

Read more about the exhibition here