In a year full of commemorative centenary events, 17 August is not one date that stands out immediately. However, it was significant in the life of Dublin Castle and for Ireland as a whole. On that day, 100 years ago, the Royal Irish Constabulary (RIC) finally departed the Castle to be replaced by a new Irish police force, the Civic Guard.

The Castle had long served as a base for policing in Ireland. Since 1836, the head of The RIC known as the Inspector General and his deputy had been based there in offices that occupied a block in the Lower Castle Yard. The RIC was responsible for policing outside of Dublin. Policing inside the city was the job of The Dublin Metropolitan Police (DMP) whose Commissioner was also located in the Castle. The G Division of the DMP, the intelligence/detective branch made famous during the War of Independence, was located at Exchange Court (formerly part of the Castle) beside City Hall. That section also housed F Company of the notorious Auxiliaries, in theory a part of the RIC, during the latter half of the War of Independence. They were often to be seen night and day in trucks, roaring out from the Lower Castle Yard to conduct raids.

Following the signing of the Anglo-Irish Treaty in December 1921, thoughts turned to the creation of a police force for the new Irish state. Michael Collins agreed with Britain’s last Chief Secretary for Ireland, Hamar Greenwood, that a provisional date of 20 February 1922 should be set for the disbandment of the RIC. A committee was set up by Collins to advise and guide on the formation of this new Irish police force. Ironically, it contained a fair proportion of RIC men. The structure of the new Civic Guard was very similar to the RIC and Collins insisted on many of its senior posts being filled by ex-RIC men. They had the policing experience but many, it was said, had also supplied intelligence to Collins during the War of Independence and were being remembered for their loyalty. This created a lot of tension among the new recruits, drawn mostly from the ranks of the Irish Republican Army (IRA) who resented ex-RIC men being shown preferment (the issue led to a mutiny in May 1922 at the Civic Guard Training Centre in Kildare Town). One key difference between the new Civic Guard and its predecessor was that it was to be unarmed.

In tandem with the creation of this new police force, the RIC and other parts of the British administration were withdrawing from Dublin Castle. On 16 January 1922, Michael Collins lad a delegation of Provisional Government ministers to meet Viscount FitzAlan, the last Lord Lieutenant of Ireland. That date is remembered as the official handover of the Castle and is marked by a plaque in the Upper Castle Yard. However, in reality, matters moved more slowly and the RIC, along with a section of the Chief Secretary’s Office, were still present in the Castle in May 1922, much to the bemusement of many who had read in the papers of the handover of the Castle months before.

The need to get the new police force properly up and running was urgent. Crime had soared in the country as responsibility for law and order fell between two administrations. 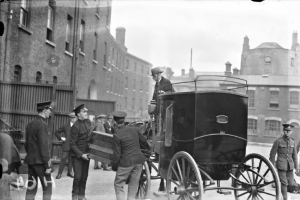 Finally, in August 1922, the moment came for the departure of the RIC. On the 17 August, a detachment of 380 Civic Guards led by their first Commissioner, Michael Staines, marched through the Palace Street Gate to take possession of their new home. The crowds who had gathered in Dame Street, outside the Castle, hoping to see a handover by the RIC, were to be disappointed. The final RIC contingent of 80 men had left that morning at 8 AM. A company of British troops from Richmond Barracks was instead sent to temporarily guard the Castle, pending the arrival of its new occupiers. Once inside the historic complex, the Civic Guards made for the Ship Street Barracks, formerly the base for the British military in the Castle, but vacant for a number of months. Michael Staines, a veteran of the 1916 Easter Rising, took up office there as the first Commissioner of the Civic Guard and began his work of policing the new State. 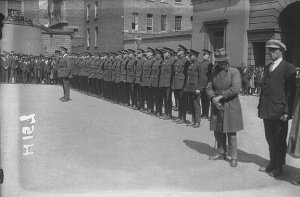 Figure 2: The Civic Guard line-up at Dublin Castle before the evacuation, 17 August 1922. Courtesy of the National Library of Ireland.

The events of 17 August 1922 are worth remembering amongst all the others remembered this year, as the country symbolically took responsibility for its own policing. The RIC was formally disbanded on 31 August that year. The following year, 1923, saw the Civic Guards evolve into what we know today as An Garda Síochána led by new Commissioner, Eoin O’Duffy. That force still maintains a presence at the Castle to this day.