By the middle of the 18th century most the Upper Castle Yard either had already been, or was in the process of being, rebuilt. In February 1750 the Surveyor General, Arthur Jones Neville, sent a memorial to the Viceroy, Lord Harrington, referring to a plan for rebuilding the section of the castle adjoining Castle Street which was by then in a most ruinous state. From the description it is clear that Neville was referring to the building now known as the Bedford Tower. On the 29th March 1750 the King approved the expenditure of £9,277.9s.2d on the project which also included the erection of the north- west block. Work began in the summer of 1750 with the demolition of the medieval gatehouse and the surviving remnants of the curtain wall. The design of the new building, like the rest of the Upper Castle Yard, was quite old fashioned for its time. The center block, without the tower and gates, was modelled on the London townhouse of Lord Herbert, designed by Colin Campbell in 1723-1724. Neville borrowed the design of the façade from volume III of Campbell’s Vitruvius Britannicus, which was published in 1725. 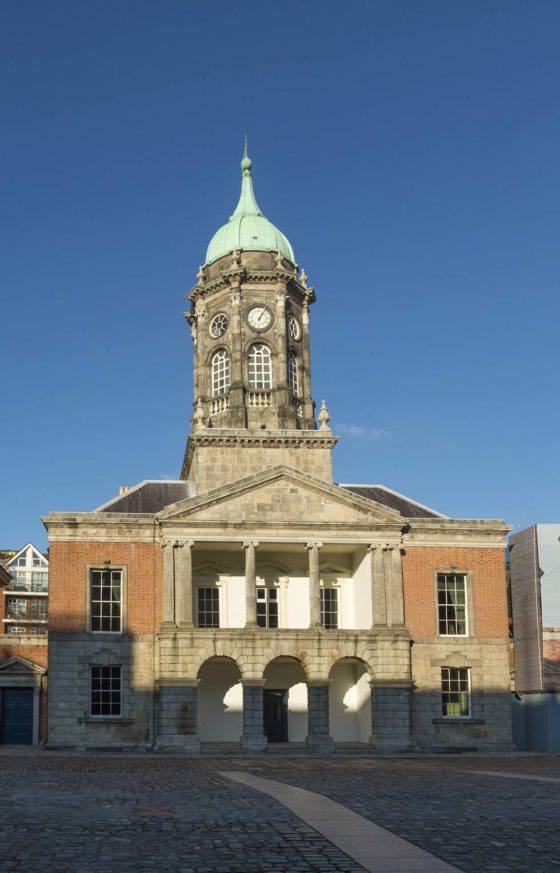 The Bedford Tower was built of brick with stone dressing made of Wicklow Granite which were intended to harmonise with the rest of the Upper Castle Yard. The new building consisted of a two story five bay façade with a three bay breakfront. The ground floor was rusticated with a three bay central arcade which supported a pedimented Scamozzian Ionic loggia at first floor level. This gallery was designed for the use of the State Musicians who performed on all state occasions. The pediment is surmounted by a square granite base topped with four urns, one at each corner. This serves as a podium upon which sits a tall octagonal tower with eight engaged Corinthian columns supporting an entablature with a modillion cornice surmounted by urns at each corner. Between the columns are eight round headed windows, above them are oculi, four of which contain clocks. The tower is surmounted by a green copper ogee dome, the first of its type in Dublin. As with the façade, the design of the tower is quite derivative. Neville borrowed it from an unexecuted design by Inigo Jones for Whitehall Palace which was reproduced in Willian Kent’s Designs of Inigo Jones, published in 1727. The Bedford Tower is flanked by wings with low brick screen walls containing pedimented doorcases. These screen walls connect the Bedford Tower with two monumental, rusticated gateways of Wicklow Granite. Both gateways are flanked by giant rusticated pilasters of the Doric order surmounted by broken segmental headed pediments containing statues mounted on pedestals. The east gate, the main entrance to Dublin Castle, was the first to be completed in September 1751. 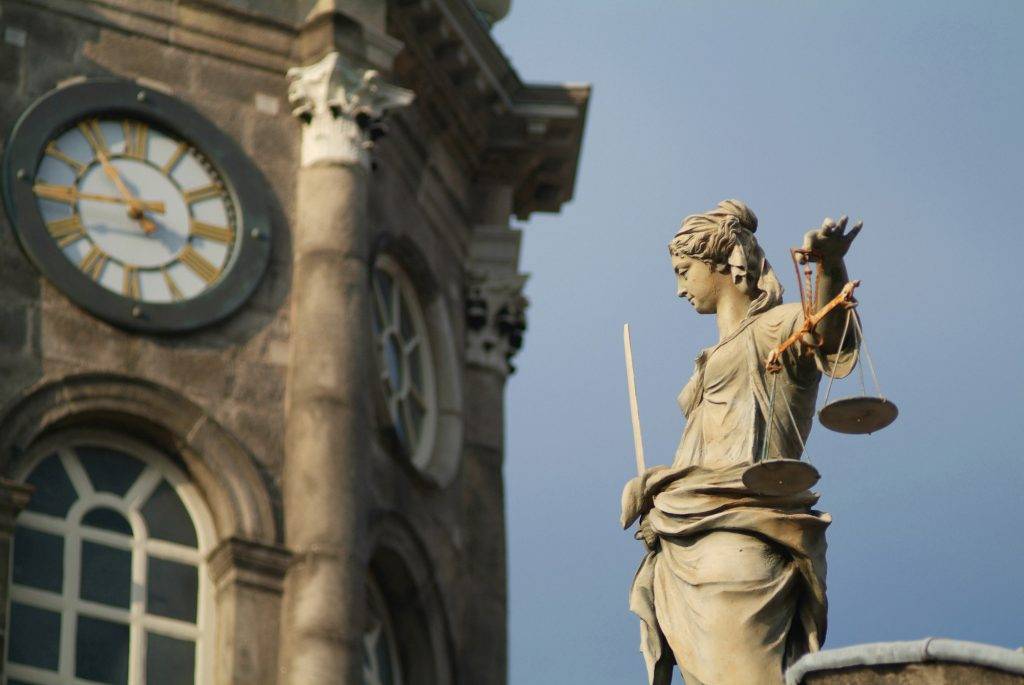 Close up of Clock Tower and Justice Statue at Dublin Castle

John van Nost the Younger, the leading sculptor in mid18th century Dublin, was commissioned to make two lead statues representing Fortitude and Justice to surmount the castle gates, these were erected in November 1753 when Thomas Eyre, Neville’s replacement as Surveyor General, paid the sculptor the sum of £125 for the work. Both statues, which turn their backs to the city and face the courtyard, were painted to resemble stone. In the 1980s when they were removed for restoration it was found that they were cast from the very poorest quality lead and that the only thing holding them together were the countless layers of paint which had been applied over the centuries. According to David Griffin, former Director of the Irish Architectural Archive, the design of the gates is derived from a drawing by the 18th century Venetian artist, Antonio Visentini, of a doorcase at the Palazzo Basadonna in Venice. Visentini produced architectural drawings as souvenirs for visiting Grand Tourists.

The last part of the Bedford Tower ensemble to be built was the new Guard House and Court Martial Room for which a drawing exists by Joseph Jarrett. In November 1753 the government purchased a site beside the castle gate, facing the entrance from Cork Hill. The intention was to erect a new Guard House on the west side with a matching building opposite to accommodate the Horse Guard, unfortunately the latter never materialized. Jarrett’s Guard House is essentially an extension built onto the rear of Neville’s Bedford Tower building. It is built of brick with stone dressings and consists of a two story seven bay façade with a three bay pedimented breakfront. The design was derived from Neville’s derivative Bedford Tower façade. On the ground floor the three center bays form an open arcade which is surmounted at first floor level by a four columned Ionic temple front with pediment. The Bedford Tower building and the Guard House are tied together at ground floor and first floor level by the continuation of the same blocking course and cornice. This gave a degree of uniformity to both buildings, despite differences in fenestration. An attic story, which was added to the Bedford Tower and Guard House c.1840, was removed in 1986.

In conclusion, the Bedford Tower, the only building of any real architectural merit in the Upper Castle Yard, was completed in 1761 by Thomas Eyre bringing to an end the long saga of reconstruction work at Dublin Castle which was begun in 1687-1688 by William Molyneux Surveyor General of Ireland.