In these times of Covid-19, with its restrictions and lockdowns, it can be easy, when searching for a word to describe the uncharted situation we find ourselves in, to reach for “unprecedented” – never known or done before. However, casting an eye backwards over the course of the last 500 years or more many instances of public health pandemics can be found. Most obvious and famous is the Bubonic Plague, but many lesser known instances exist.

It had been the custom in the nineteenth century that the Guard at Dublin Castle, stationed at the Guard House and the Cork Hill Gate, would be relieved each day with a small ceremony in the Upper Castle Yard. On occasions such as St Patrick’s Day each year, a much larger display of trooping the colour would take place, watched by the Viceroy and his family from the balcony that once attached to the Throne Room, and by members of the public gathered in the Yard. 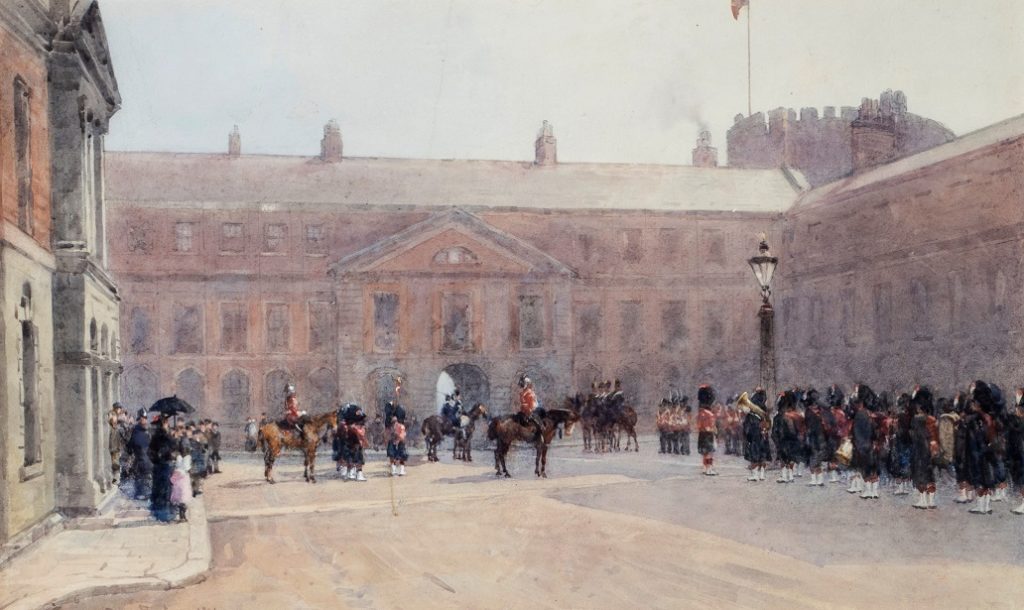 What follows is a letter dated 27 March 1832 to Sir William Gossett, Chief Secretary for Ireland, whose office was located in the Upper Yard of Dublin Castle, from one Thomas Oldham of 7 Lower Buckingham Street, Dublin.

I know not whether you are the regularly official authority, with
whom to communicate on occasion of the Cholera now in Dublin, but as a
Gentleman who has taken a particular interest in the enquiring as to the
means to prevent its spread & one who has immediate communication
with the Military authorities, I trust I cannot be astray in addressing you.

It has been remarked in the Commons House, by an officer, who
commanding in India, had been very successful in preventing the Cholera
among his forces, that assembled crowds or mobs were found most
injurious in spreading the complaint.

On yester morning passing the Castle Gate at
the time of relieving the guard, it appeared to me that the crowd, of the lowest grade, who
were there & who daily assemble on that occasion, is among the things to
be corrected, as highly dangerous, if the disease should spread.

The upper Castle Yard is a close square without an open side, or a
thorough current of air when crowded, & had this disease appeared
instantly after Patrick’s day the vast assembly of poor, & destitute, &
drunken, on that occasion, might have been deemed as the most probably
influencial [sic.] cause.

Allow me to suggest that finding the suspicion of the Complaint
being in Dublin dispensing with the Band on relieving the guard, would
disperse this daily crowd, & without seeming to interfere would remove
that danger.

Or if Military etiquete [sic.] required it […] 3 fifes & a Drum might
accompany, or one band might attend in the Barrack Yard to march off the
Guard & wheel off at the gate – & another wait in the part of the Castle
Guard House to march the Guard in and out from the [Cork Hill] Gate only
– this would greatly lessen the [illegible] feared by not gathering the idle
& destitute [illegible] on the march & thus danger to the Garrison,
as well as the Inhabitants would be so far removed – & the caution produce no
excitement.

Pray pardon the Liberty I have taken & believe me to be, with
every respectful consideration,
Sir
Your very faithful & obed[ient] Serv[ant] 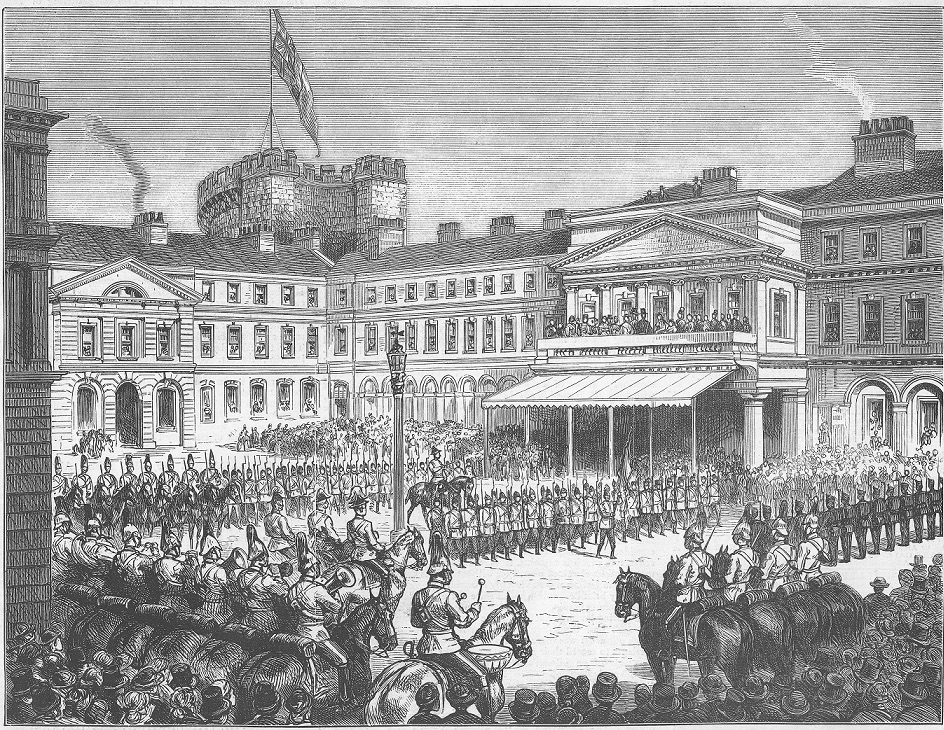 “St. Patrick’s Day in Ireland – Trooping the Colours before the Lord Lieutenant at Dublin Castle” from The Graphic, 20 October 1880

As you can read in the above letter, the idea of social distancing as a tool to inhibit the spread of disease is nothing new, and certainly not unprecedented. Oldham suggested that the entertaining part of the relieving of the guard, namely the band, be done away with in an effort to stop people gathering together in crowds to watch it. By keeping people physically distant from each other, he hoped to inhibit the spread of the cholera.

Such measures have been taken a step further in the present time, with a wide-ranging list of regulations and guidelines issued by the Government for the public to follow in an effort to stop the spread of Covid-19. In line with these, the interiors of Dublin Castle have been open with social-distancing measures in place and are now currently closed to the public for a period of three weeks.

What is unprecedented, in this context, is how far we have progressed since 1832, particularly in the area of our knowledge. We know more about Covid-19 today than our counterparts did of cholera in 1832, or than our ancestors did of the plague in the seventeenth century. While social-distancing would have done little to stem the spread of cholera back then (it is a waterborne disease), it has been shown to lessen the spread of infection of Covid-19. This is the advantage we have over those who have come before us.

We also have the advantage of history, and a better, wider knowledge of it than those in 1832 had. History shows that we can survive pandemics, that they come and they go. History also allows us to interrogate the past, to pose questions, to ask: “What if?” We have no room for such questions today – we know how Covid-19 spreads and we know how to lessen that spread. While we look forward to welcoming visitors back to Dublin Castle in the future, in the meantime we encourage you all to follow the appropriate guidelines to help prevent the spread of Covid-19 – was your hand regularly, keep physically distant where possible and wear a mask where you can’t.

*The above letter comes from the Registered Papers of the Chief Secretary’s Office, which are held in the National Archives of Ireland, and which are currently being digitised.