Next month, Ireland’s 14th presidential inauguration will take place in Dublin Castle, with the victor of the forthcoming election due to be officially sworn into office in St Patrick’s Hall. This venue has been used ever since the first ceremony installing Douglas Hyde 80 years ago, making it the most significant Irish political event held currently in the Castle on a regular basis. This brief history of presidential inaugurations at the Castle will show that while certain features have changed over the years, many of the major elements of this process remain largely the same.

On the day of the ceremony, the President-elect’s motorcade traditionally arrives at the Castle through the Cork Hill gate around midday. These processions have often attracted large crowds – an estimated 125,000 people took to the streets in 1938 to witness Hyde’s journey to and from the Castle. The Irish Times described that, upon his arrival, ‘virtually every window in the Upper Castle yard was crowded with members of the civil service, some of the more adventurous of whom – women amongst them – found vantage points on the roof’.

After arriving into the Upper Castle yard, the President-elect exits their vehicle and is greeted by the Tánaiste at the entrance to the State Apartments before being led up the main staircase onto the Battle-Axe Landing. At this point they may pause briefly – or enter the Throne Room to leave off their coats, as Mary McAleese did in 1997 – before receiving the signal to enter St Patrick’s Hall. 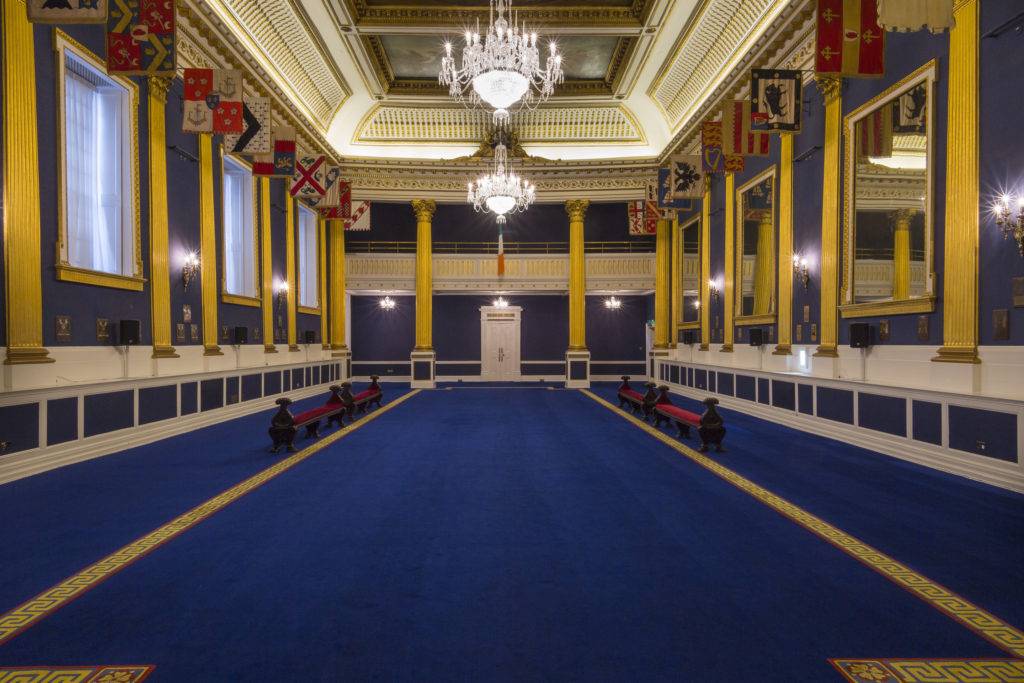 The layout of the Hall has been one of the staple features of the inaugurations since the beginning. Five or six rows of guests (including parliamentarians, diplomatic corps, army representatives, religious figureheads and family members) are usually seated along the length of the hall on each side, almost from one end to the other, with attendees on one side of the room facing directly those on the other. The President-elect proceeds up the aisle in the middle to the dais stationed at the far end of the Hall, where the Taoiseach, as well as members of government and judiciary, await. Normally, an average of around 350 people would be in attendance.

On this stage, directly below the Irish tricolour, the President-elect is administered the oath and formally sworn into office by the Irish Chief Justice. Cearbhall Ó Dáilaigh currently holds the particular honour of being the only person so far to have both read out (in 1966 and 1973) and recited (1974) the declaration. Normally, an address from the Taoiseach follows before the newly ordained President gives their maiden speech. Once finished, the Army Band No.1 (who have provided the music for each ceremony so far) burst into a rendition of the national anthem from their regular position in the gallery above the dais as the President exits the hall. Once outside again, the presidential motorcade begins the procession to Áras an Uachtaráin.

The themes of nationhood and the Irish language were stressed heavily in the initial ceremonies. The first five inaugurations were conducted almost entirely in Irish, and to date each President has recited the oath in the official language – including Erskine Childers in 1973, who was not a fluent speaker. Seán T O’Kelly (1945-1959) and Eamon De Valera (1959-1973) regularly referenced sovereignty and the struggle for independence in their respective speeches. De Valera’s re-election in 1966 was particularly symbolic given the commemorative events for the 50th anniversary of the 1916 Easter Rising that had occurred two months prior – in his inauguration speech that year he also touched on the issue of partition, alluding to ‘the political unity which we so desire’.

Despite this, St Patrick’s Hall still bears a number of ornaments associated with the Castle’s previous role as the viceregal court in Ireland. The primary example are the banners hung from both sides of the Hall, which bear family crests of members of the Order of St Patrick – a knighthood established in 1783 to harness greater support in Ireland for the British crown. The symbol of this Order (the eight-pointed star) can still be seen at the edges of the ceiling. 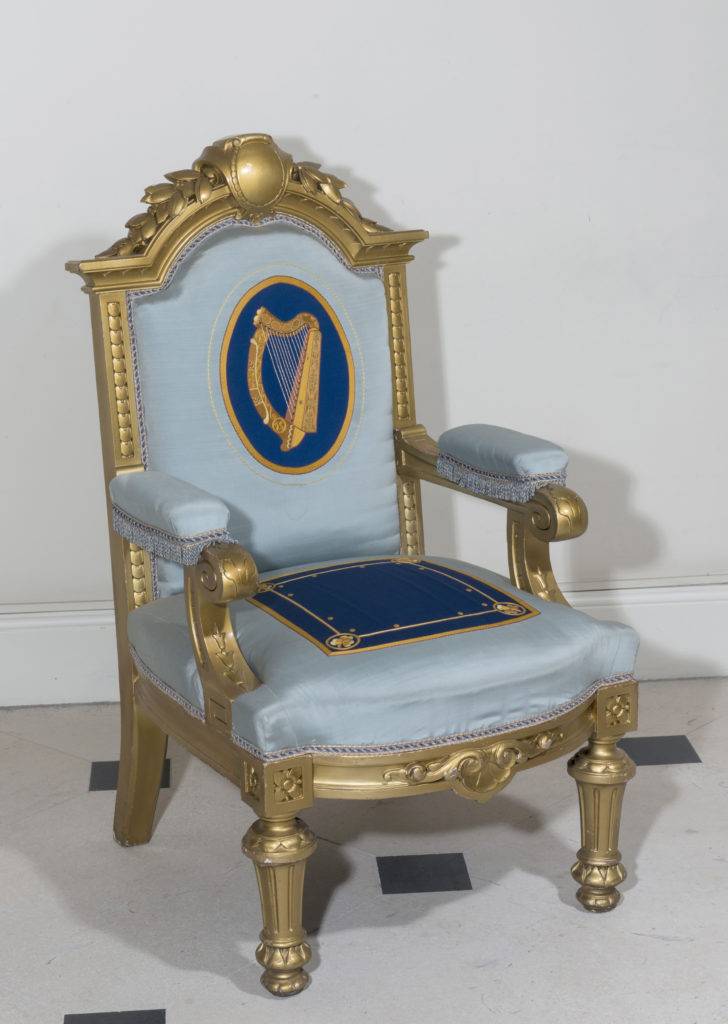 The same can also be said of the presidential chair that was used on stage for all the ceremonies between 1938 and 2004. This chair was in fact a throne that had been made for Dublin Castle during the reign of Queen Victoria. It originally bore the initials ‘VR’ (Victoria Regina) on the oval section at the top of the seat, as well as a royal crown behind it. When the decision was made to use it as the presidential chair, however, the crown was cut down and the ‘VR’ wiped off. The seat itself was also reupholstered in blue, with the presidential seal patched into the middle. It was retired after Mary McAleese’s second inauguration, with a new presidential chair making its debut for the swearing-in of Michael D Higgins in 2011.

Religion still plays a central role in these ceremonies – albeit one that has been modified in recent times. Initially, inauguration day would begin with the President-elect attending service at either St Patrick’s Cathedral or St Mary’s Pro-Cathedral, depending on their religious affiliation. This was changed for Patrick Hillery’s second inauguration in 1983, when the religious service was incorporated into the main ceremony in St Patrick’s Hall itself. While this may seem a more streamlined approach, it has made for a longer ceremony – Hyde was only in St Patrick’s Hall for 15 minutes in 1938, whereas Higgins’ installation in 2011 lasted over one hour. 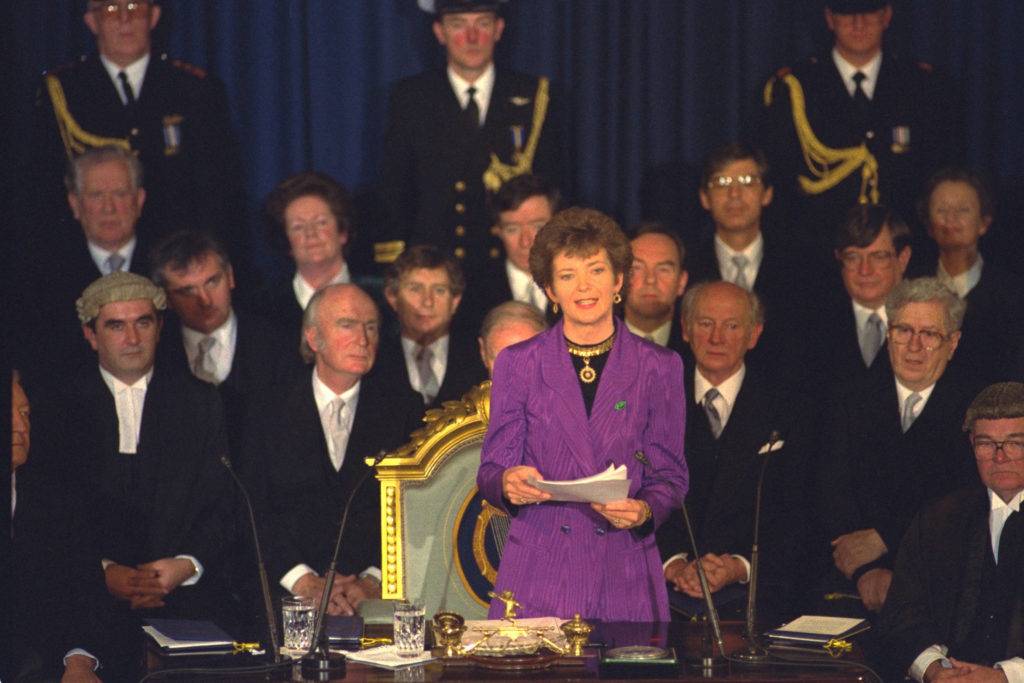 Mary Robinson during her acceptance speech in the 1990 ceremony

The presidential speeches read out in the Hall have also, in some cases, set the tone for the term to come. Ó Dáilaigh famously stated upon his entry into office in 1974 that Presidents ‘don’t have policies. But perhaps a President can have a theme’. His resignation two years later meant that any reforms he had in mind for the office fell by the wayside. But in 1990, Mary Robinson – the first non-Fianna Fáil candidate to win an Irish presidential election – took up this challenge, speaking in her inaugural address of her intention to use the office to promote human rights and the Irish diaspora.

When Mary McAleese succeeded Robinson in 1997, she very much continued in the same vein, declaring in her own speech: ‘The theme of my Presidency… is building bridges’. It was a fitting choice given the impending Good Friday Agreement in Northern Ireland (where McAleese herself is from), as well as the historic visit of Queen Elizabeth II in 2011 (whom McAleese entertained in Dublin Castle). This theme was further enforced with the presence of 800 children from schools throughout the 32 counties in the Upper Castle yard, who cheered as she made her entrance into the State Apartments. 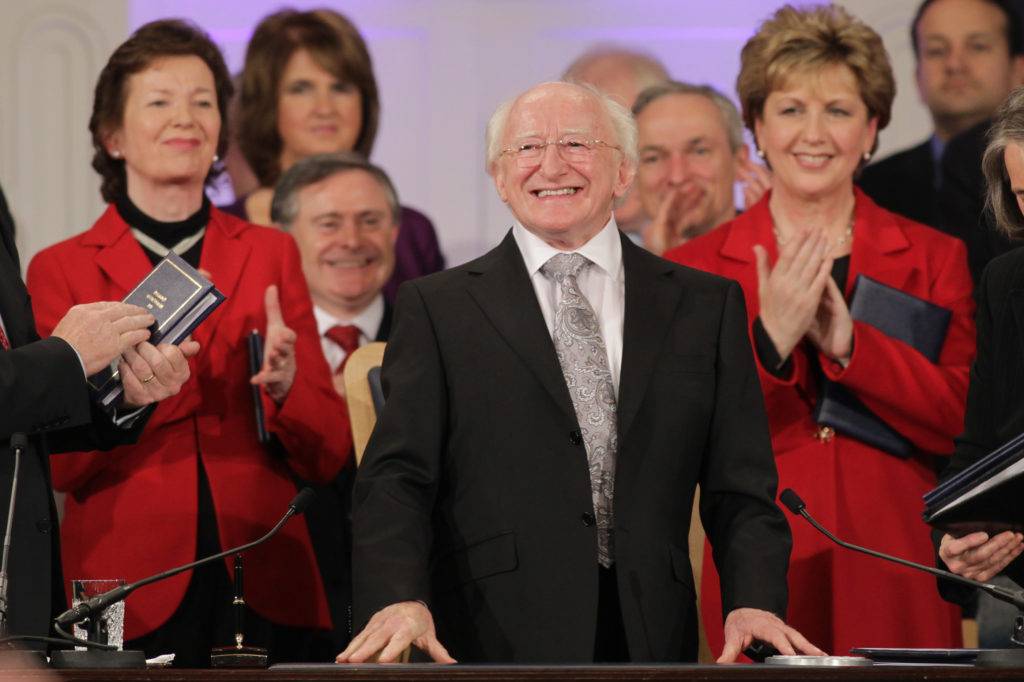 The school children were present again in 2011 for the swearing-in of Michael D Higgins, who put ‘inclusion and creativity’ at the centre of his speech. With a new inauguration now days away, there will be much interest in the contents of this year’s address in Dublin Castle, as well as the subtleties and pomp to be found within the ceremony itself.