In the days before Irish independence, the vicereines of Ireland were the wives of the country’s Lords Lieutenant, or viceroys, who represented the British monarch at Dublin Castle. An understanding of the role of the vicereines in Irish politics has fallen victim to the lingering gaps in women’s history. All too often, women have been diminished to footnotes, recognized merely as the wives of influential men. Up until now, Ishbel, Countess of Aberdeen (1857–1939) has been almost exclusively considered the Irish vicereine who pushed boundaries and made something more of her position. While Lady Aberdeen did indeed advocate passionately for Irish causes such as Home Rule, she was not alone in redefining the scope of a vicereine’s influence in the Victorian era.

Charlotte, Countess Spencer (1835–1903), who was vicereine of Ireland from 1868 to 1874 and again from 1882 to 1885, displayed a sincere commitment to the Irish people that would radically affect her standing in British society. Re-introducing the world to Charlotte Spencer is a step towards uncovering the forgotten voices of history and reclaiming the narrative of women who struggled for individuality in a male-dominated world. 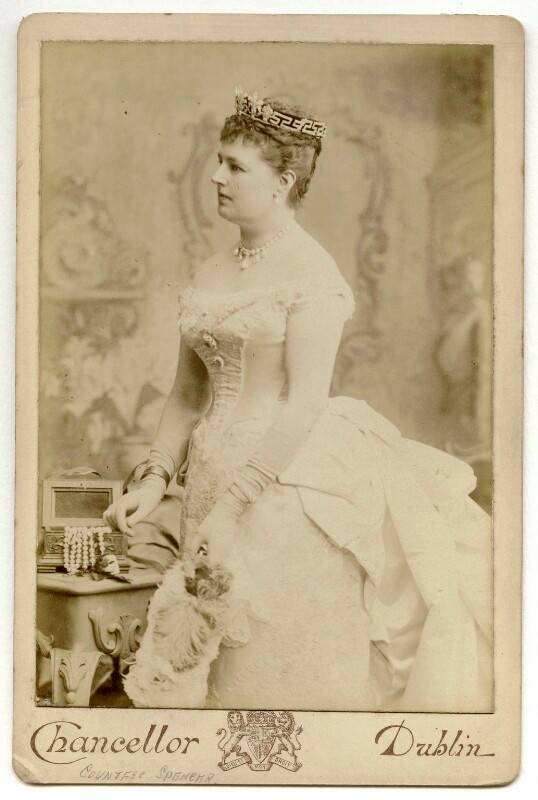 From a young age, Charlotte Spencer (then Charlotte Seymour) had an avid interest in politics. She would often engage her siblings in political debates, earning the teasing family title of ‘our profound politician.’ Her father, Lord Bristol, who had been a Conservative during his tenure in the House of Lords, joined the rising tide of Liberal Conservatism in the early decades of the nineteenth century. The developing tumults within the political world of the United Kingdom were not lost on the astute Charlotte, who carried her liberal ‘Whig propensities’ with her throughout her life. A figure such as Charlotte Spencer is rarely found in the rigid world of nineteenth-century aristocratic society in Britain. Independent and courageous, she challenged the restrictions placed upon her by the prevailing social standards of the time and was determined to follow the path that she believed was right.

During the two terms that her husband John, 5th Earl Spencer (1835–1910) served as viceroy of Ireland, Charlotte carved out unprecedented influence for herself, which she then wielded to advocate for the Irish people in a manner that few had done before her. The Spencer viceroyalty struggled to maintain peace and prosperity in the face of significant obstacles: the aftermath of the Famine, the Phoenix Park murders, and the ever-present question of Home Rule. At this time of uncertainty, Charlotte Spencer succeeded in helping to further elevate the position of vicereine from that of dutiful hostess to politically engaged figure with considerable influence on the Irish people. 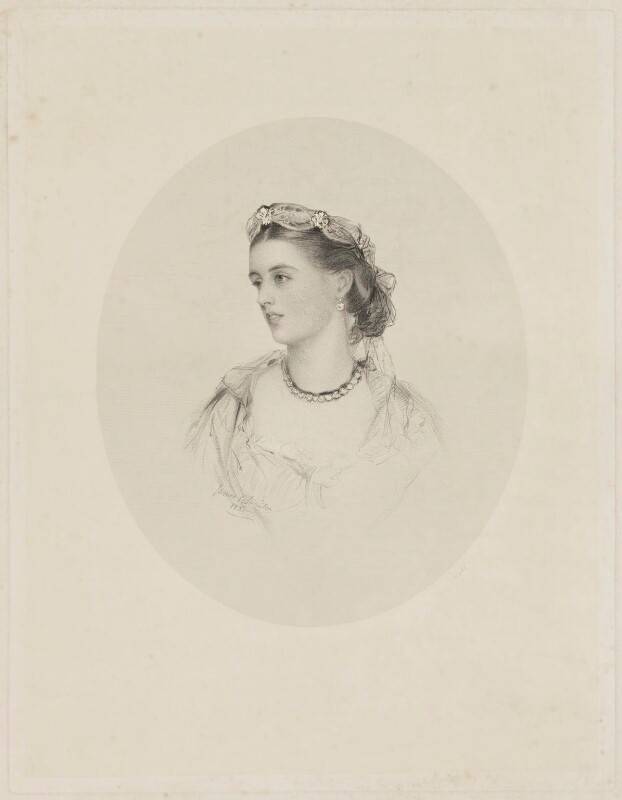 The Spencers’ first term in the viceroyalty, from 1868 to 1874, coincided with the tenure of William Ewart Gladstone (1809–1898) as Prime Minister. Unless Queen Victoria herself paid a visit to Ireland, the viceroy was the paramount political figure on the Island. Lord and Lady Spencer placed the utmost importance on faithfully representing the monarchy, allowing this to serve as the ‘guiding thought’ during their viceroyalty.

While many previous viceroys were only begrudgingly involved in Ireland, the Spencers fulfilled their roles with enthusiasm. Their genuine interest in the Irish people is evidenced by their frequent trips across the country to locations such as Killarney, Ballinrobe and Westport (among many others). Their visit to Westport was especially significant. The Mayo Examiner reported that the appearances of important persons such as the viceroy were ‘like those of angels – few and far between.’ While there was a great deal of uncertainty surrounding how the public would react to the Spencers arriving in the west, they received an overwhelmingly warm welcome in Westport. The successful visit prompted the same paper to report that this reception was indicative of ‘the general public appreciation of the efforts of those Liberal statesmen’ (referring to both Gladstone and Lord Spencer).

The affection of the Irish people for Charlotte was most apparent following the Phoenix Park murders in 1882. While Lord Spencer’s first viceroyalty had left Ireland in a general state of peace, conditions quickly ‘deteriorated’, prompting Gladstone to appoint him to a second term as viceroy. Lord Spencer initially arrived back in Dublin without Charlotte, who was scheduled to return a few weeks later. The shocking murders of Ireland’s Chief Secretary and Under Secretary in the Phoenix Park, on 6 May 1882, marked a violent transition in the relationship between Ireland and Britain. The ‘serene fortitude’ of Charlotte’s character became a beacon of light during this unprecedented trial. In her husband’s absence, Charlotte spoke directly with the Queen at Windsor regarding the ‘grave political crisis now existing in Dublin.’

In the midst of anger and despair, Charlotte’s arrival in Dublin after the murders was ‘to many as a tower of strength in those dark days.’ She had proven herself to be more than a mere figurehead and was seen as a partner to her husband. She had shown herself to be a woman capable of engaging in difficult political discussions with the reigning monarch, and helped to lift the spirits of a nation during a time of peril. 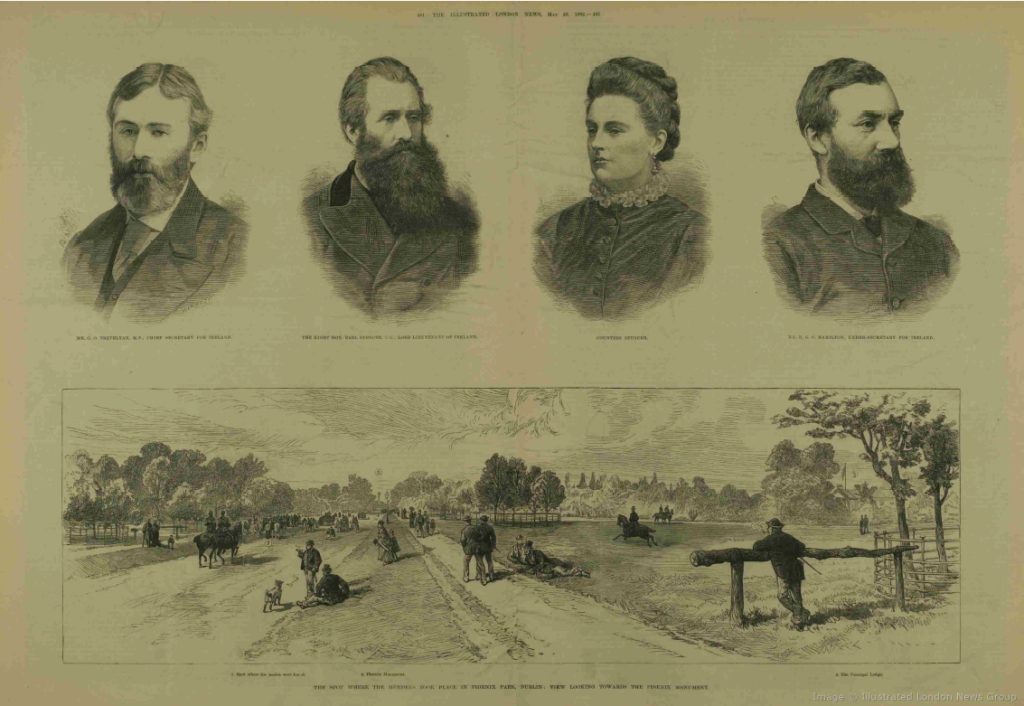 One of the most telling examples of Lady Spencer’s reputation as a powerful political and social force in Ireland comes from a poem written after her arrival in Dublin in May of 1882. Originally published in The World, the poem, by the devout Catholic writer Rosa Mulholland, describes the shattering effect of the Phoenix Park murders on the Irish people, who are said to have turned to Charlotte for reassurance. Mulholland calls on the Countess, not Lord Spencer, to ‘weed out the wicked’ and ‘cut with sword of light.’ She begs the returning vicereine not to attribute the actions of the murderers to the entire nation, reminding Charlotte that she ‘won our love by winning word and smile.’ According to Mulholland, the people did not look to their viceroy or to Queen Victoria for support or guidance. Rather, they rejoiced at the return of Charlotte as their ‘gentle queen’ come ‘to rule the storm.’

Following the turmoil of the Phoenix Park murders, the remainder of the Spencers’ political and social careers became defined by their public stance on the question of Home Rule for Ireland. Despite the opinions of their peers, the Spencers’ public declaration in favour of Home Rule was not influenced by Gladstone’s convictions on the subject. Instead, Lord Spencer had been developing the opinion that granting the Irish ‘some measure of self-government’ was the only path to establishing peace. After experiencing two separate terms as vicereine, Charlotte’s convictions brought her to the same independent conclusion, and she became a dedicated supporter of Irish Home Rule.

The consequences experienced by the Spencers for their political opinions were considerable. Chief among them was social isolation. Invitations dwindled as many of their long-time friends and colleagues distanced themselves from the Spencers. The inevitability of these adverse reactions would not have been unknown to Charlotte and her husband. However, the depth and surety of their convictions outweighed the social protocols that defined their world. The Spencers were a couple that had spent seven years as the monarch’s direct representative in Ireland, which they believed meant speaking with the voice of the Queen. The sovereign’s favour, which they had earned over years of dedicated service, fell apart as a result of their stance on Home Rule. The Queen ‘pointedly no longer invited’ them to Windsor, further isolating them from society. 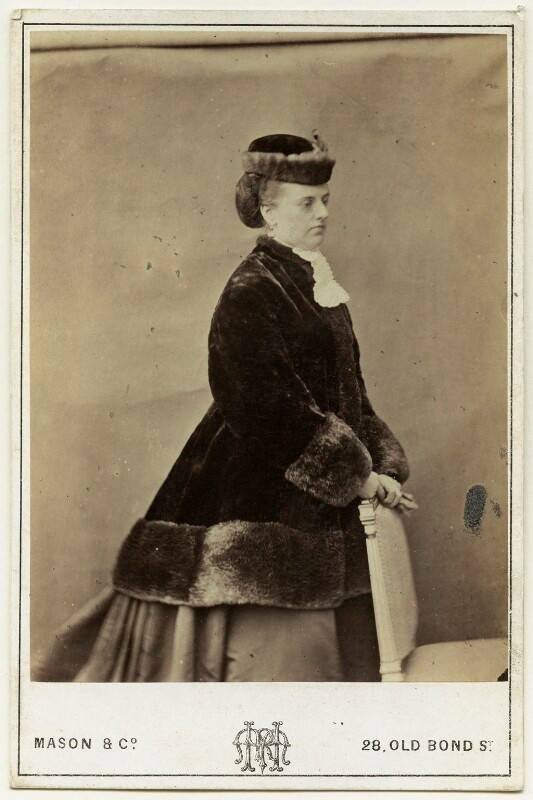 With full knowledge that the Queen’s permanent disapproval was inevitable, Charlotte chose the path that she deemed to be right, refusing to be influenced by the opinions or expectations of others. She would show that, during her years as vicereine, the Irish people had not misplaced their trust or become enamored with a façade. Charlotte Spencer cared deeply about Ireland, as evidenced by her continued interest in the country following the end of her husband’s viceroyalty. Two years after her departure, she opened her house at St. James’s Place, London to the ‘exhibition and sale of the work of the Donegal Industries’ in 1887.

Her political interest in Ireland also remained strong. In a letter to her closest friend and cousin, Lady Constance Leslie of Castle Leslie, Co. Monaghan, Charlotte expressed dismay at the deteriorating state of Ireland in 1885, following her return to England, confiding that it left her ‘more desperate than before.’ This same letter also displayed a keen awareness of political detail that women of Charlotte’s class are not always given credit for. In discussing how coercion bills were now ‘impossible to carry out’, she was referring to an early decision by Spencer’s immediate successor as viceroy, Lord Carnarvon, not to renew the Crimes Act. Charlotte was furious at Lord Carnarvon’s lack of foresight, confiding in her cousin that she could ‘never forgive Lord Carnarvon for what he has done.’ Her engagement in and grasp of contemporary politics surpassed that of many of her peers, both female and male.

Before Lady Aberdeen debuted her “Celtic’ court dress’ at Buckingham Palace and became the vicereine most closely associated with political activism in Ireland, Lady Spencer had likewise sought to build on the examples of the vicereines who had gone before her and to challenge the traditional boundaries of this female role. As vicereine, she made herself present throughout Ireland, allowing the people to regard her and Lord Spencer as their ‘good friends.’ She supported Irish industries. She stood up for Irish Home Rule and aligned herself with Gladstone, despite the social isolation that would inevitably follow. Dynamic and personable, Charlotte Spencer helped to challenge the Victorian ‘glass ceiling’ by redefining the position of the woman, and of Ireland, in the United Kingdom of the nineteenth century.