Dublin Castle houses a unique and varied art collection that often surprises its visitors. Most of the historic artworks are exhibited in the State Apartments, originally built as a residence for the British viceroy in Ireland, but it is only in the Drawing Room that they are displayed in classic art salon style. Although this method of hanging paintings side-by-side and one over another can pose a challenge to the visitors who would like to examine works more closely, sometimes it makes for humorous and fortuitous encounters. 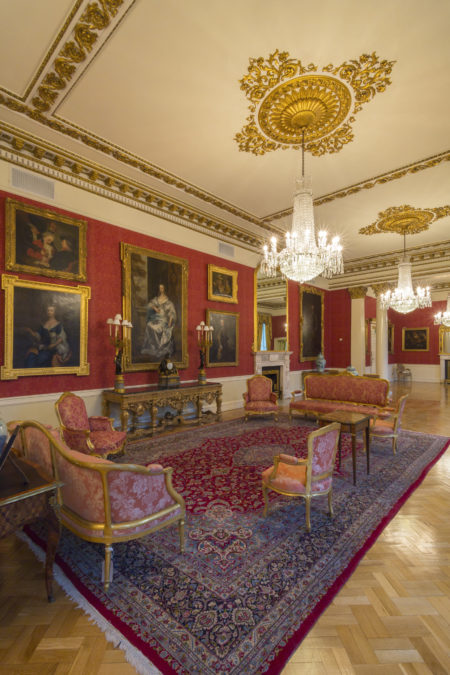 In the south westerner corner of the room, for instance, to the left of the door that leads into the Throne Room, live two paintings – Portrait of George II (1683-1760) after Godfrey Kneller, and Vulcan at his Forge painted by Gaetano Gandolfi in 1767. They hang close together and tell a story far more amusing than if singly considered.

Portrait of George II was most likely painted by the Irish artist Michael Mitchell who copied, to some degree, the full-length version that Godfrey Kneller made in 1716 and which is currently exhibited at Hampton Court Palace. Even though George was still Prince of Wales at the time, this London portrait became his ‘official image’ when he became king – possibly because he notoriously disliked having his portrait taken. 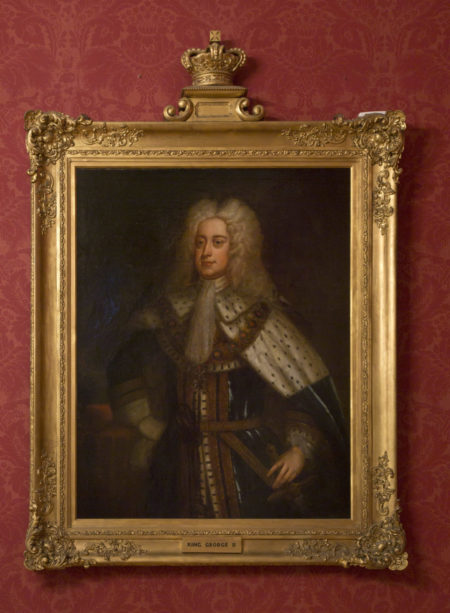 The three-quarter-length portrait displayed in Dublin Castle, partly a replica of the ‘official’ likeness, shows the same youthful, almost frontal face with brown eyebrows, dark bright eyes with marked pouches, and full lips with the bottom one protruding. However, the body differs so much from the original that the artist could have painted it from a written description! There are discrepancies in the depiction of the King’s robe of state with the ermine-trimmed mantle, and with the full periwig that falls well below the king’s shoulder and reaches the collar of the Order of the Garter. Most notably, the hands are quite different from those in the original painting, with the left one clenched on the King’s hip – a sign of hostile attitude as stated by modern body language experts.

It has been often pointed out that George II, unlike his father, could at least speak English, but it seems that knowing the language of his adoptive country was not of much use to someone who passed for anything but an affable man, and was unpopular with the British public. Luckily for him, he was married to Caroline of Ansbach, whose portrait also hangs in Dublin Castle’s Drawing Room.

In the 1700s, at the royal court in London and the viceregal court in Dublin alike, the drawing room was a crucial space for interaction. Guests, including politicians who might behave badly in the Houses of Parliament, were expected to mingle and to be polite to everyone in the Drawing Room, where high standards of behaviour had to be observed.

Even though she was often the target of satirical prints, Caroline was a genial host and used to perform her drawing room duties far better than her husband. Carrying on a polite conversation wasn’t George II’s forte. He was so bad at disguising his feelings that he would turn around and show his backside to the people he disliked. Whereas contemporary political commentators and caricaturists amused the public by calling this peculiar technique ‘rumping’ – that is, turning the backside, or rump, towards someone – courtiers and politicians were appalled to find such a hostile attitude in a drawing room – a space so polite and controlled that it was often referred to as a stage. 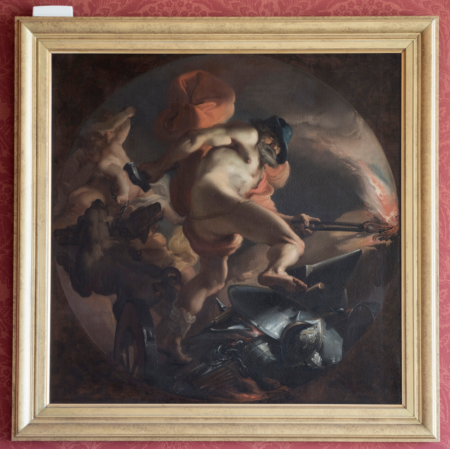 Gaetano Gandolfi, Vulcan at his Forge, 1767, oil on canvas, Office of Public Works

This other quite belligerent figure, displayed next to the Portrait of George II at Dublin Castle, was painted in the 1760s by the Italian, late Baroque painter Gaetano Gandolfi to decorate an unidentified palazzo. Part of a set of mythological paintings purchased by the Board of Works during the 1830s to decorate Dublin Castle’s Throne Room, it didn’t make the cut and ended up in the adjacent room.

Vulcan at his Forge shows the Roman god of fire working at the forge wearing nothing but a blue hat that looks like a modern fedora – two draperies, supposed to wrap around Vulcan’s body, have ended up hanging mostly in mid-air. The god is showing off a muscular body, crafting weapons while balancing on a chariot. This vehicle is not the only unconventional iconographic attribute associated with the blacksmith god represented in this roundel as, on the left, three rotating putti are pulling a chain and dragging a three-headed dog away. Although these elements can fascinate some viewers making them wonder if the cuckolded Vulcan may have stolen the chariot of his rival in love, Mars, and left the gates of the Underworld unattended while kidnapping Cerberus, the feature that truly catches the attention is the one created by the god’s rotating body – what, in George II’s time would have been described as Vulcan’s ‘rump’.

Vulcan’s pose appears rather ungracious because the roundel, which is a ‘sotto in su’ (Italian for ‘from below to above’) is not supposed to be seen at eye level but be hung close to the ceiling as to give the illusion that the figure is suspended in the air, above the viewer. Nevertheless, its current display is certainly an interesting one, and begs the question – who’s ‘rumping’ whom now? 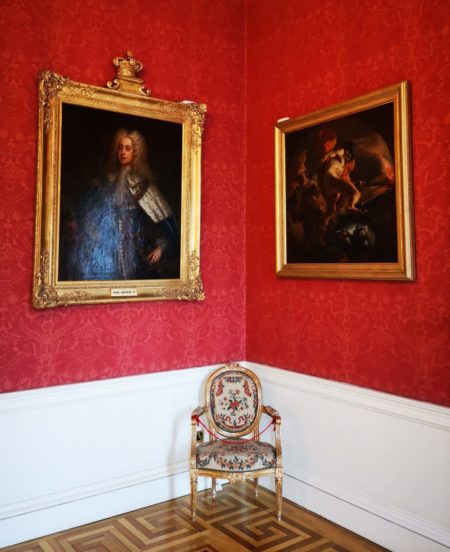