The Office was finally handed over from the British to the Irish Government on 1 April 1943, and was formally renamed the Genealogical Office, though it continued to be known as the Office of Arms. The intention was that it would focus its work on Irish genealogical research. However, it also maintained the right to grant arms – which it still does to this day – and it was renamed the Office of the Chief Herald of Ireland.

The reconstituted Office used its skills to popularise heraldry and family research, and also deployed its talents diplomatically. At Dublin Castle, a coat of arms was designed for President John F. Kennedy; heraldry was popularised among Irish organisations, companies and institutions; and Ireland’s Chief Herald contributed to the design of the European flag. This work is all inextricably linked to the physical location where it happened, at Dublin Castle, which it left in 1981. 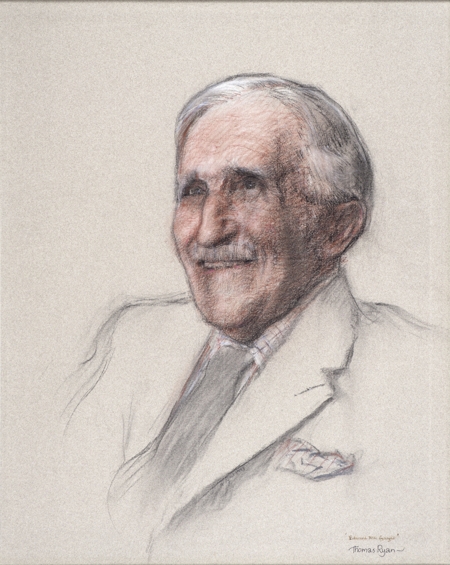 Edward MacLysaght was the person appointed to take over the Office of Arms when it was reconstituted in 1943. It was known as the Genealogical Office and he was initially known as the Chief Genealogical Officer, later being redesignated Chief Herald of Ireland. He was a farmer, horticulturalist, poet, novelist, senator, historian and Irish-language enthusiast, who had been working with the Irish Manuscripts Commission before he was appointed to the new Office.

By his own admission, he was ‘an amateur in genealogy and an ignoramus in heraldry’. However, he successfully placed the reconstituted Office on a solid footing. He was also successful in maintaining for the Office the right to grant and register coats of arms.

After six ‘unsatisfying years’, MacLysaght left the Office of Arms and returned to the Irish Manuscripts Commission. 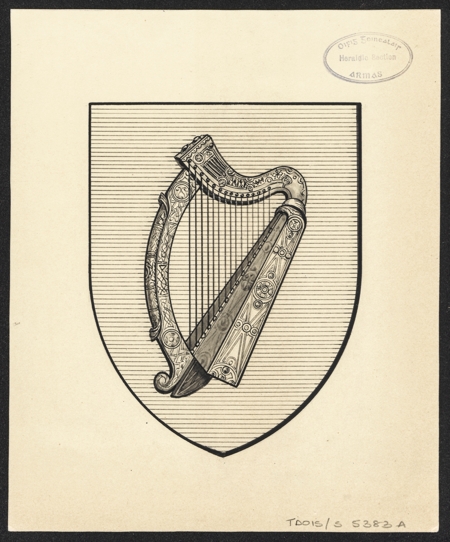 The Arms of Éire (copy)

Discussions on an official coat of arms for an independent Irish state had been ongoing since 1922. Thomas Sadleir had been consulted in that year, and again in 1931 and 1940. MacLysaght brought the subject to a successful conclusion, with the Taoiseach of the day, Éamon de Valera, taking an active interest in the design.

The arms of Ireland, as registered, show a golden harp with silver strings on a blue or ultramarine shield. The harp is modelled on the Brian Boru harp at Trinity College Dublin, which was also used in the design of the official state seal of Ireland in the 1920s.

This is one of the early finished designs of the new coat of arms. The horizontal ‘hatched’ lines indicate that the shield was  blue.

The Government gave the order to formally register the arms on 2 November 1945. This was an important moment for the Office and illustrates the Government’s commitment to both it and its work. 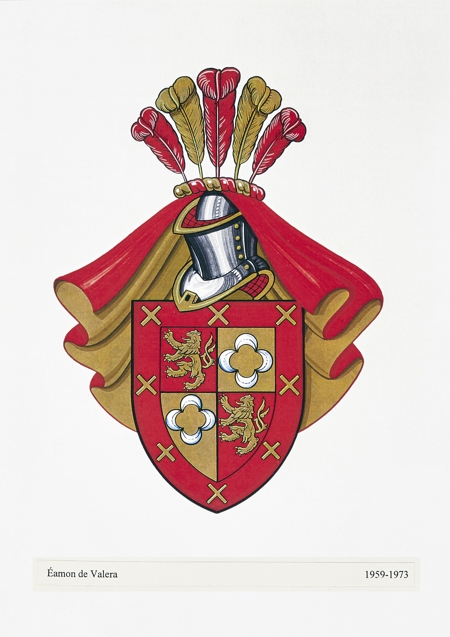 Register of the Arms of the Presidents of Ireland

Office of the Chief Herald of Ireland – 1990 – Pen and ink on paper, bound – National Library of Ireland.

Following MacLysaght’s initiative, a tradition was established whereby each successive President of Ireland was granted arms by the Chief Herald. They have been recorded in this Register, which is kept in the National Library of Ireland.

Shown here is the coat of arms of Éamon de Valera. A copy of these arms was presented to de Valera, as President of Ireland, on 21 October 1965, by the Spanish Ambassador to Ireland, His Excellency Jose Pradera. De Valera’s father had been Spanish, and this diplomatic gift served to highlight and reinforce the diplomatic ties between the two nations. 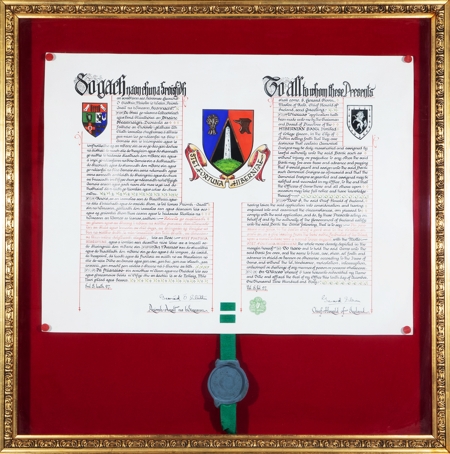 Grant of arms to the Hibernian Bank Ltd.

This grant of arms was made to ‘The Chairman and Board of Directors of the Hibernian Bank of Ireland Limited of College Green in the City of Dublin’, on 10 December 1960.

It illustrates a change in attitudes towards the Office following its transfer to the Irish government in 1943. In the 1950s and 1960s, many corporate bodies were granted or had registered coats of arms. These included universities, companies, hospitals, professional societies and organisations, sporting associations as well as urban, district and county councils.

Heraldry was embraced as an ancient way of creating a visual identity, one that was still relevant and useful in the twentieth century, and continues to be so today. 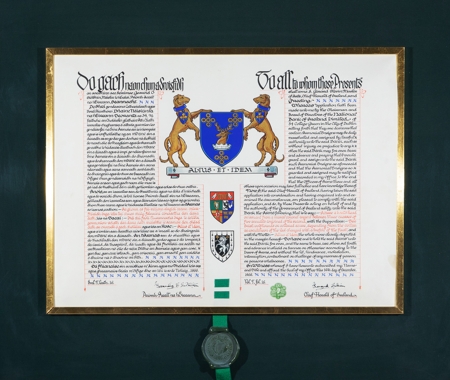 Grant of Arms to the National Bank of Ireland Ltd.

This grant of arms, which was made to the National Bank of Ireland on 16 December 1966, is a good illustration of the changes which took place following the transfer of the Office of Arms to the Irish Government in 1943.

The most obvious of these changes is the text, which appears in both Irish and English. From 1937, following the passing of a new Irish Constitution, the Irish language became the first official language of Ireland.

Also, the coat of arms of the new Office, which was designed and registered by Edward MacLysaght in February 1945, can be seen on the vellum. It consisted of the arms of the four provinces of Ireland, above which is a portcullis between two scrolls. The motto of the Office, which was adopted at the same time, was Patrum Memores (mindful, or remembering, the fathers, or ancestors). The other coat of arms that can be seen is that of the Chief Herald, Gerard Slevin. 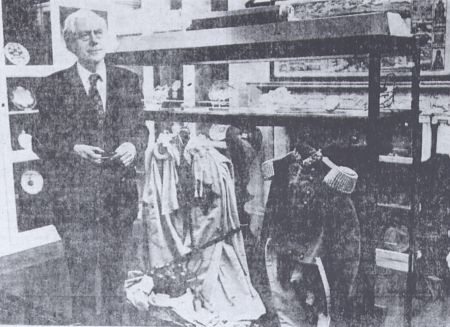 Gerard Slevin was the longest-serving Chief Herald during the Office’s time at Dublin Castle, from 1954 to 1981. He was born in Cork and studied English and Philosophy at University College Cork. He joined the civil service in 1944 and became assistant to Edward MacLysaght.

When MacLysaght left the Genealogical Office, Slevin took over the running of the Office, initially as Deputy Chief Herald and later as Chief Herald.

He oversaw the expansion of the Office’s genealogical services, instituting an advisory service for the growing number of people coming from abroad, seeking to trace their family roots and connections. During his tenure, several hundred grants of arms were made to Irish public bodies, including many municipal and civic authorities.

Slevin also did much to promote heraldry, not least as a diplomatic tool. He designed coats of arms and provided information on Irish family history to well-known public figures and politicians around the world, serving to reinforce their connection to Ireland. 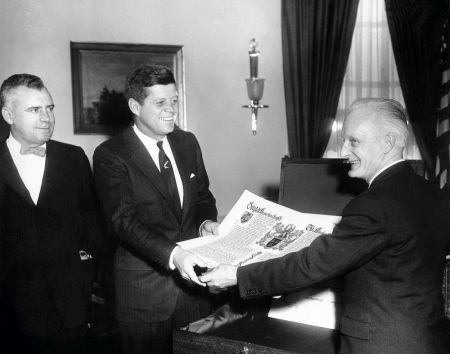 On 17 March 1961, Ireland presented President John F. Kennedy of the United States of America with a personal grant of arms in the Oval Office of the White House.

The idea of a grant or arms to Kennedy had been Gerard Slevin’s, after he had heard Kennedy make heraldic references in his State of the Union Address. The arms were designed by Slevin and presented to the President by Ireland’s Ambassador, Thomas J. Kiernan (who can be seen on the right), in the presence of Congressman John E. Fogarty.

This diplomatic gift highlights the use of heraldry and genealogy as a way Ireland had of exercising its soft political power. The Office of Arms also prepared grants of arms or illuminated family trees for Australian and Canadian prime ministers, as well as for several other American presidents and Charles de Gaulle of France, all of whom had Irish ancestral links. 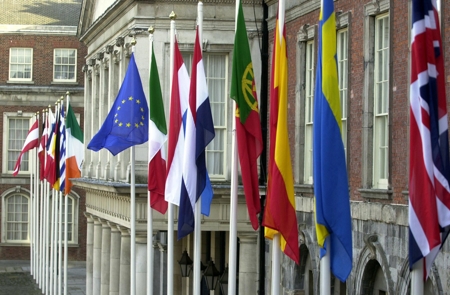 Flag of the European Union

The history of the design of the European flag is both complicated and contested. The idea for a blue flag with gold stars originated with Arsène Heitz, who submitted several designs with varying numbers of stars arranged in various ways.

In 1954, Gerard Slevin was one of the three European heralds appointed to a special committee to advise on different designs and proposals. He seems to have argued against the inclusion of any Christian symbolism appearing on the flag, lest it cause offence to future non-Christian Member States. He also appears to have been involved in drafting the official description of the flag. However, any other contribution he may have made remains unknown.

The final design has been described as:

deeply meaningful in its simplicity – a clock-like circle of twelve gold stars … on a blue background. The heraldic circle symbolises perfection, unity and harmony whilst the twelve stars symbolise the passage of time – twelve points of the clock or twelve months of the year.

While no one person can claim all the credit for the completed design, it seems appropriate to think of it as having been ‘co-authored’, the product of many individuals working together, among them Ireland’s Chief Herald. The flag was formally adopted by the Council of Europe as its emblem in December 1955, and later by the European Union. 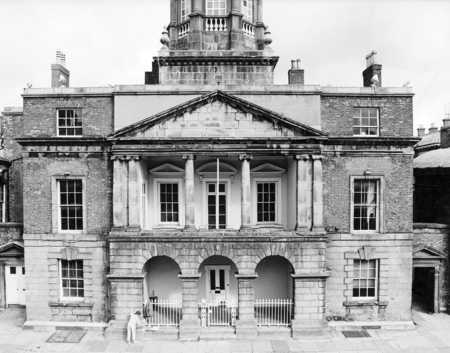 The Bedford Tower was begun in 1750, tradition suggesting that it was constructed around one of the surviving stone towers of the medieval Castle Gatehouse, and completed in 1761.

Previously the home of the Dean of the Chapel Royal, and later of the Fisheries Board, the Tower became home to the Office of Arms in 1903 and remained so after it was reconstituted in 1943.

A building of such a vintage would eventually show its age. An inspection made by architects of the OPW, on 6 November 1981, led them to officially condemn the structure as unsafe – it was in danger of collapse. Staff returning from their lunch were not allowed to enter.

So ended, suddenly, the physical connection between the Office of Arms and Dublin Castle. This image shows the Bedford Tower shut up. A steel prop can be seen between the two columns of the balcony, helping to support the pediment overhead. Cracking can also be discerned across the façade. The Tower was later restored as part of Dublin Castle’s conference facilities. The Office of Arms, or the Office of the Chief Herald, as it is properly known today, was relocated to the National Library of Ireland on Kildare Street, where it remains today.