The disappearance of the Irish Crown Jewels occurred on the eve of great change, not just for the Office of Arms, but also for Dublin Castle – and Ireland as a whole. The Office was left in a precarious position as Ireland descended into war, first with Britain (1916, 1919–21) and then with itself (1922–3). Despite this, it managed to emerge from the partitioning of the island as one of the only institutions with an all-Ireland authority, and it continued to provide services to both new governments on that island – a rare instance of unity and continuity at that time.

Among these services, it designed a coat of arms for the new State of Northern Ireland and superintended the opening of its new Parliament in 1921. South of the border, it continued to be accommodated at Dublin Castle, which quickly became one of the centres of the new Irish Free State Government. Perhaps more importantly, the Office maintained control of its valuable records, preventing them from being lost in Ireland’s civil war. 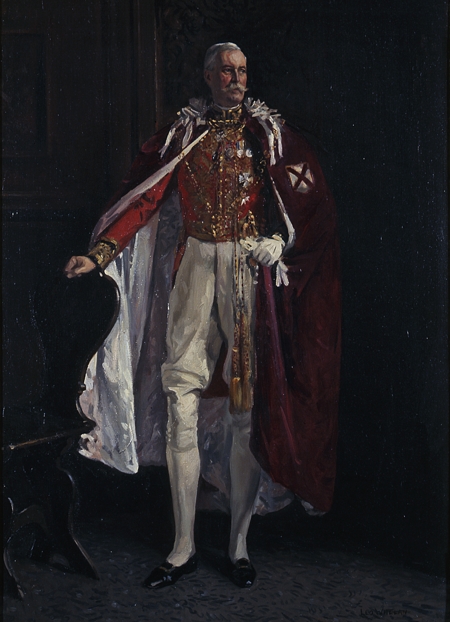 Sir Nevile Rodwell Wilkinson was a soldier and artist, who had developed an interest in heraldry. In 1908, he succeeded Sir Arthur Vicars as Ulster King of Arms.

He was an imposing figure, standing 6 feet 5 inches high, and was responsible for supervising the last royal visit to Ireland, that of King George V in 1911, as a result of which he was made a Commander of the Royal Victorian Order (CVO).

This portrait of him was painted by Leo Whelan, who had been a student of William Orpen at the Dublin Metropolitan School of Art. In it, Wilkinson wears his crimson robes as Knight Attendant on the Most Illustrious Order of St Patrick. 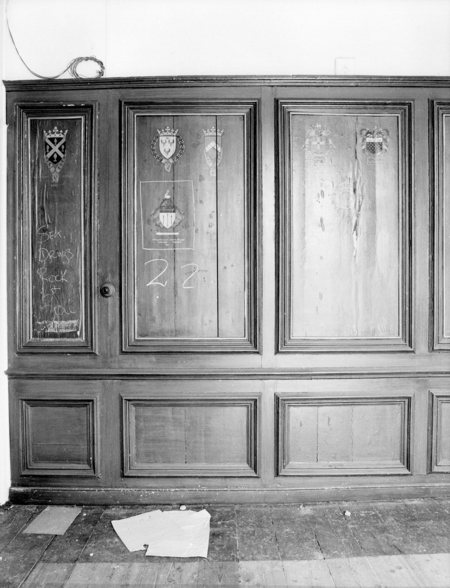 In 1909, Wilkinson gave a lecture to the Royal Society of Antiquaries of Ireland in which he said: ‘I should like to impress upon you, that, in my humble opinion, the future of heraldry depends on its artistic excellence’, adding ‘Anything that adds to the beauty of the inanimate objects with which we are surrounded has a distinct influence for good, and is, therefore, worthy of our support.’

With this in mind, he acquired some seventeenth-century panelling and had it installed in his office, on the first floor of the Bedford Tower. As he describes in his memoirs:

On this ancient panelling I caused to be painted by various hands, to ensure variety of design, the armorial bearings, names and dates of appointment of the twenty holders of the title of Ulster, from the covered cups on the shield of Bartholomew Butler, appointed in 1552, to the present holder.

The panelling remained in the office until the 1980s, when it was removed during renovation works in 1986.

In 1906, Inspired by his baby daughter ‘seeing’ a fairy disappear among the roots of a tree in his family garden, Sir Nevile created this palace as a home for the fairy queen, Titania.

This massive doll’s ‘house’ was manufactured from 1907 onwards, constructed by the Dublin furniture-maker James Hicks. It was made of mahogany at a scale of 1:12. In its finished state, Sir Nevile calculated that it ‘stands on an area of 63 square feet’.

The palace was made in eight sections allowing it to be easily transported. And transported it was, to 160 cities all over the world. The palace was, in Sir Nevile’s own words, ‘A scheme designed to benefit suffering children.’ Within two years, it had been seen by more than 170,000 people and had raised more than £3,000 for charity. The Palace was bought in 1978 by Legoland and is on display today in Egeskov Castle, Denmark.

Sir Nevile’s long absences on tour with Titania’s Palace meant that most of the day-to-day running of the Office of Arms was left to his deputies, primarily to Thomas Ulick Sadleir. 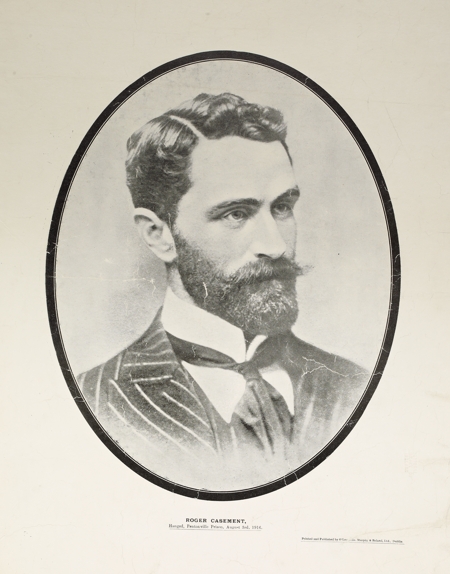 Roger Casement was born in Dublin and joined Britain’s imperial colonial service in 1892. During his work in Peru and the Belgian Congo, he earned a reputation for exposing human rights abuses, particularly on rubber plantations.

He developed strong Irish Nationalist sympathies and joined the Irish Volunteers. He was successful in persuading the German authorities to send arms to aid the Easter Rising in 1916. The boat carrying these arms, the Aud, was captured at Banna Strand, Co. Kerry and Casement himself was arrested shortly afterwards. He was taken to Britain, where he was tried and executed for treason.

Casement was considered a part of the British establishment, and his conversion to the cause of Irish Nationalism shocked that establishment. His story also serves to illustrate how the split between Nationalist and Royalist was not clear-cut along the lines of religion or class. Another example of this was Countess Constance Markievicz, who had once been a frequent guest of the Lord Lieutenant at Dublin Castle. 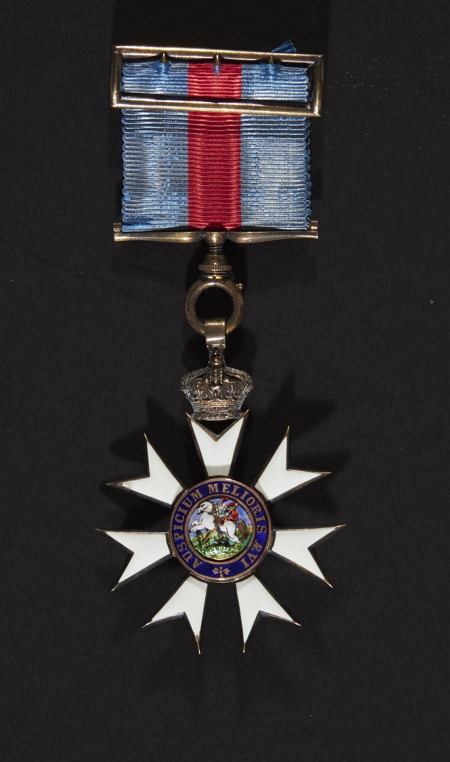 The Order of St Michael and St George recognises the services of those within British territories, particularly in the area of Foreign Affairs. Following his tenure as British Consul in the Congo Free State, King Edward VII appointed Roger Casement a ‘Companion of the Most Distinguished Order of St Michael and St George’ in 1905. He was later made a ‘Commander’ of the Order, in 1911.

After his execution, his family returned these letters and his badge to the government, who in turn gave them to the Office of Arms. Probably due to the political tensions following the Rising, they were secreted behind a false panel in a display case in the Office and only rediscovered in 1981.

The treatment of Casement’s knighthood serves to highlight how contentious and politically charged symbols, such as knighthoods, coats of arms and seals, could be.

The Latin motto of the Order reads: ‘Auspicium Melioris Aevi’, which translates as ‘Token of a better age’.

On Easter Monday 1916, Dublin rose in rebellion again the British Administration in Ireland. Several public buildings, most notably the General Post Office on O’Connell Street, were captured by rebels.

The rebels took over the Guard House at the Castle, albeit temporarily. This lance was left behind by them when they withdrew to a more secure position in City Hall. After the Rising, it came into the possession of Sir Nevile Wilkinson, who painted it with the facts of its history:

The 1916 Rising set in motion a train of events that would eventually lead to the creation of the new states of Northern Ireland and the Irish Free State in 1921 and 1922 respectively. These changes were to leave the Office of Ulster in an anomalous position – a Crown Office, paid by the British Treasury, but located in a building that was taken over by the new Irish Free State in 1922. 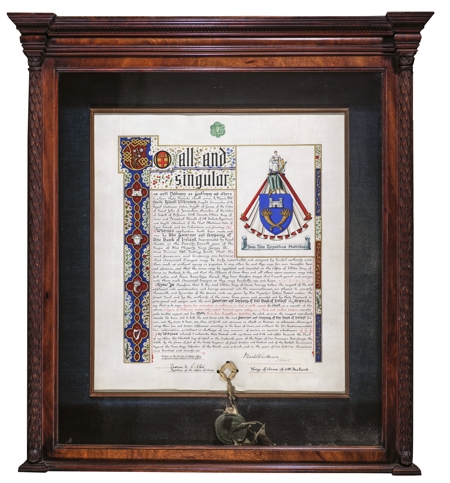 Throughout its history, one of the primary duties of the Office of Ulster King of Arms was granting and registering coats of arms, both to individuals and public bodies. These were recorded in volumes of registers, which are still in use today.

Given the social importance of coats of arms, they were generally carefully designed and skilfully executed works of art. In addition to being recorded in the Registers of the Office, a copy of the coat or arms was emblazoned on a sheet of vellum, to which the seal of the Office of Arms was appended, and presented to its owner.

This example records the registration of the arms of Governor and Company of the Bank of Ireland. The richness of illumination and the decorative nature of this grant is indicative of the status associated with it. So too is the bespoke wooden display case, which is likely contemporary with the artwork inside. 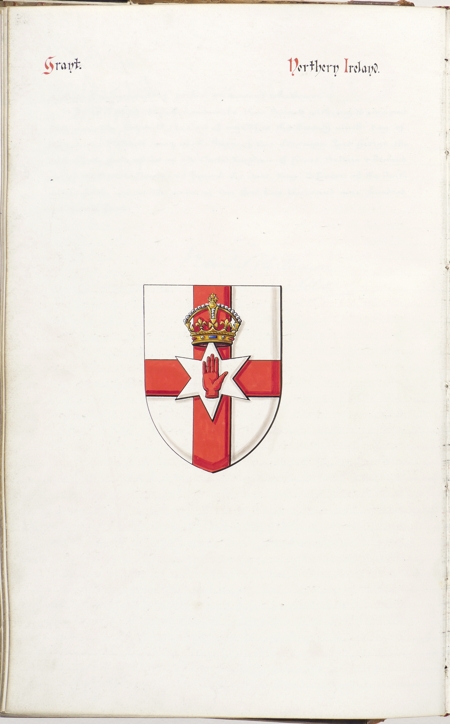 As early as 1924, the Office of Arms was consulted about the possibility of designing a coat of arms for Northern Ireland.

The new state consisted of only six of the nine counties of the province Ulster (Antrim, Armagh, Derry/Londonderry, Down, Fermanagh and Tyrone), while three (Cavan, Donegal and Monaghan) formed part of the Irish Free State.

Several proposals were made for a new coat of arms, this being the one that was finally chosen. In a written explanation of the design, Sir Nevile Wilkinson wrote:

the symbolism is suitable, the North Star, with its six points, represents the Six Counties, being under the Imperial Crown. The hand of authority shows the self-government of the northern portion of Ireland, while the whole rests securely on the Cross.

The coat of arms was granted on 2 August 1924 and was formally registered in this volume in the Office of Arms at Dublin Castle. 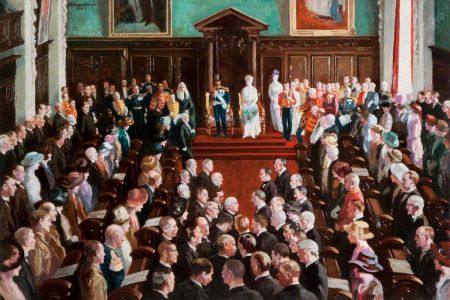 State Opening of the Parliament of Northern Ireland

This painting depicts the last great formal ceremony that Ulster King of Arms presided over. It shows the opening of the new Northern Irish Parliament by King George V on 22 June 1921. As a result of the War of Independence between Britain and Ireland (1919–21), Ireland had been partitioned into two separate states.

George V and Queen Mary can be seen in the centre of the canvas, standing before their thrones. To the right of the Queen can be seen the Lord Lieutenant, Viscount FitzAlan, holding erect the Irish Sword of State. To the right of him, with bended knee and lowered head, reading from a parchment, is Sir Nevile Wilkinson. This event marked an end to the Office of Arm’s historic role in the choreography of state ceremonial and spectacle.

As a member of the Lord Lieutenant’s Household, Sir Nevile was also present in the Privy Council Chamber of Dublin Castle, when the Castle and the Government administration of Ireland were handed over to Michael Collins on 16 January 1922. 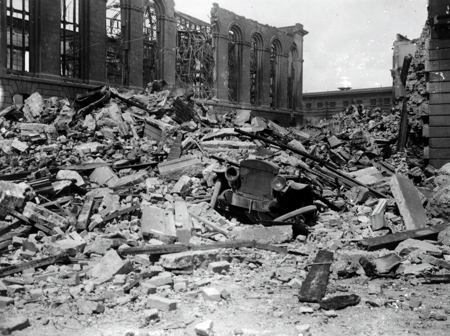 One of the great resources and treasures of the Office of Ulster King of Arms was its trove of records. These spanned centuries and were used by the Office in its day-to-day genealogical work.

It was the intention of the new Free State Government to move these records to the Public Record Office in the early months of 1922, for fear that they might be taken to Britain. On hearing this, Thomas Sadleir immediately closed the Office, in what appears to have been a bid to buy some time. It worked.

On 30 June, a massive explosion decimated the Treasury of the Public Record Office, shown here. Hundreds of years of Irish history went up in smoke, with surviving pages and fragments scattered on the winds as far as Howth.

This tragic episode marked a sad and seminal event in the course of Irish history and the study of that history. However, as a result of Sadleir’s action, the records of the Office of Arms were saved from the destruction. As rare survivors, they would form the foundation of the Office’s genealogical work for most of the twentieth century. 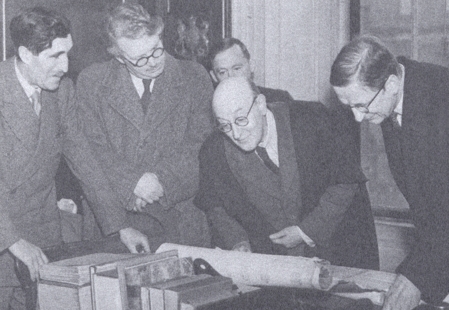 Sadleir was a ‘witty and fluent talker’, if also a shy man, with a ‘dry, almost sardonic, sense of humour’

His expertise, dedication and generosity helped him to foster amicable relations with members of the new Irish Free State, post-1922. It may be largely down to him that the Office was not altogether boycotted by the new authorities. His relations with Hugh Kennedy and, later, Éamon de Valera, earned their high regard for him and for his work.

His loyalty to the Sovereign made it impossible for him to countenance remaining after the Office was reconstituted in 1943. Here we see him next to de Valera (on the right) at the handing over ceremony.