Dublin Castle and the Great Hunger

Here at Dublin Castle, we have been delighted to host the Coming Home: Art and the Great Hunger exhibition over the last few months, with visitors enjoying the exhibition in their hundreds every day. The collection, from Ireland’s Great Hunger Museum at Quinnipiac University, Connecticut, the world’s largest collection of Famine-related art, is in Ireland for the first time. The artworks are a stark reminder to us of the many ways in which the Famine affected Ireland, with the death and emigration of approximately 4 million people, particularly throughout the 1840s and up until the end of the 19th century, as well as the immense effects on Irish language and culture.

Situated in the Coach House of Dublin Castle, a building that originally served to block the view of 19th century tenements from the aristocracy in the castle, this exhibition prompts us to wonder about the role of the castle throughout this harrowing time in Irish history. Dublin Castle served as the seat of British Rule for centuries, and the base of the monarch’s representative, the viceroy. Much like today, it has always been a somewhat multi functional building, and perhaps at no time was the diversity of its functions more apparent than throughout the time of the Great Hunger in Ireland. 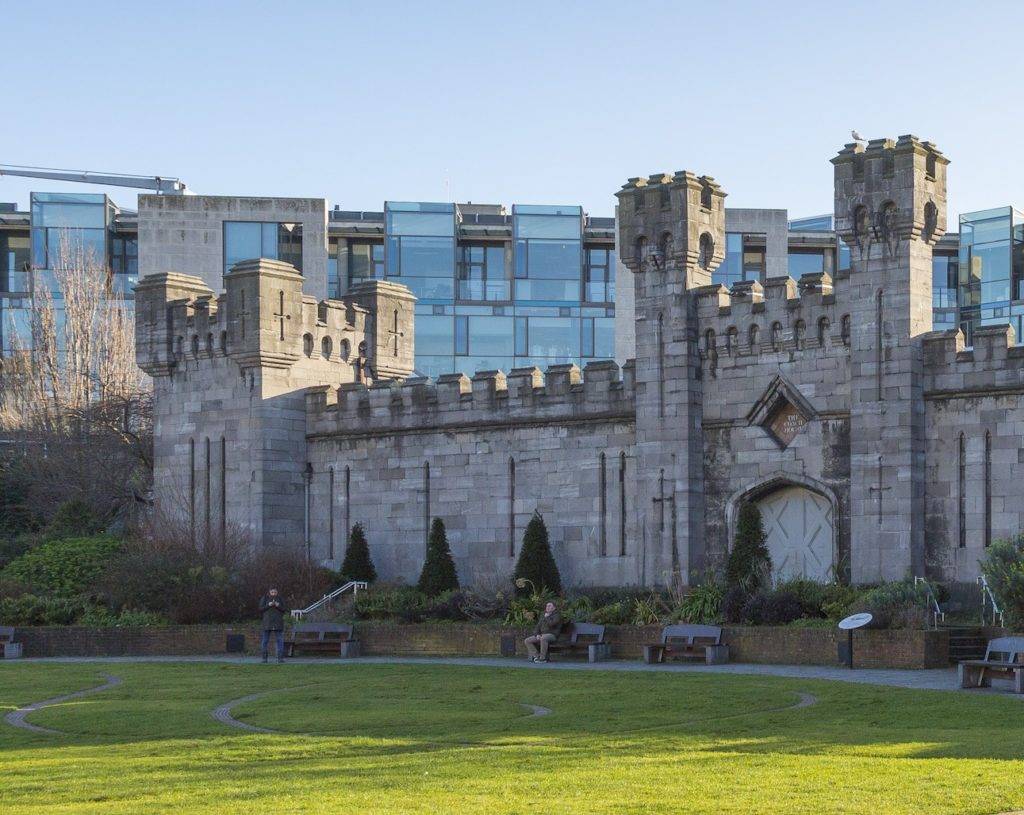 On the one hand, Dublin Castle was the location of the Relief Commission. This was the central body responsible for administering relief around Ireland throughout the Famine. Led by Randolph Routh, head of the commissariat, and John Burgoyne, a senior engineer of the Office of Public Works, and made up of a small group of civil servants, former military officers, the commission corresponded with local committees around the country, who would send letters in their thousands every day to Dublin Castle, outlining their relief needs. Relief was allocated according to various criteria (to those who were considered “very poor” and possessed “no means”) and took the form of loans, work schemes, soup kitchens and distribution of grain. It’s estimated that the Commission supplied relief to almost half of the population, with certain local committees working better than others. However the scheme was relatively short-lived, lasting only for two years. Despite the advice and input of scientists, the constabulary, and members of the gentry, they failed to anticipate the scale of the disaster that was the Famine, which impinged on the relief they offered. This was made worse by communication problems with local committees, as well as squabbling and other organisational problems, and the responsibility was eventually handed over the Irish Poor Law Commission. 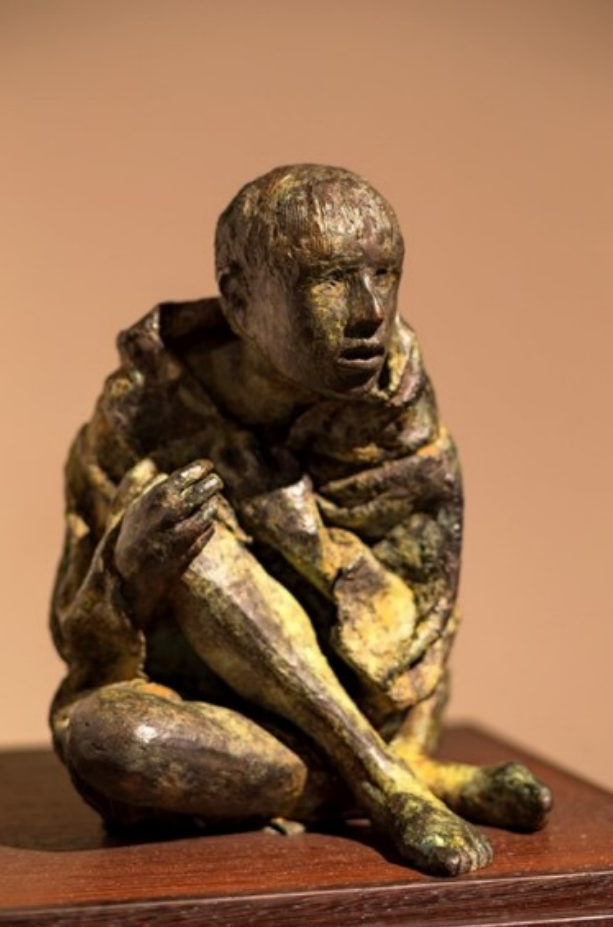 The Victim by Rowan Gillespie, 1997

In stark contrast to the activities and priorities of the Relief Commission, visitors to the Viceregal Apartments of the Castle in the 1840s would have witnessed little or no evidence of the horrors going on around the country. It was customary for the viceroy to host the social season at the Castle every year in the springtime, during which members of the aristocracy were invited to attend levées, balls and other lavish events. These were big occasions, with no expense spared, and so it remained throughout the Famine. Even aside from the Season, the Viceregal Apartments was a regular venue for all kinds of ornate events. The most notable example of this during the time of the Famine was the visit of Queen Victoria in 1849. She was later portrayed by some Irish nationalists as the “Famine Queen” and was criticised for not doing enough to help Ireland, although she did contribute £2,000, the equivalent of £61,000 today, from her personal resources. With regard to her visit to Dublin Castle in 1849, significant improvements were made to the rooms in anticipation of the big event. Changes were made to the Drawing Room and St Patrick’s Hall, while the ceiling in the Throne Room was raised. Some of the individual events held in the rooms throughout Queen Victoria’s visit attracted up to 2,000 guests. While Dublin did not suffer from the Famine to the same extent as many other parts of Ireland, the poverty which existed there at the time is undeniable, with the vast majority of people in the city living a very different life to that which went on inside the Viceregal Apartments. 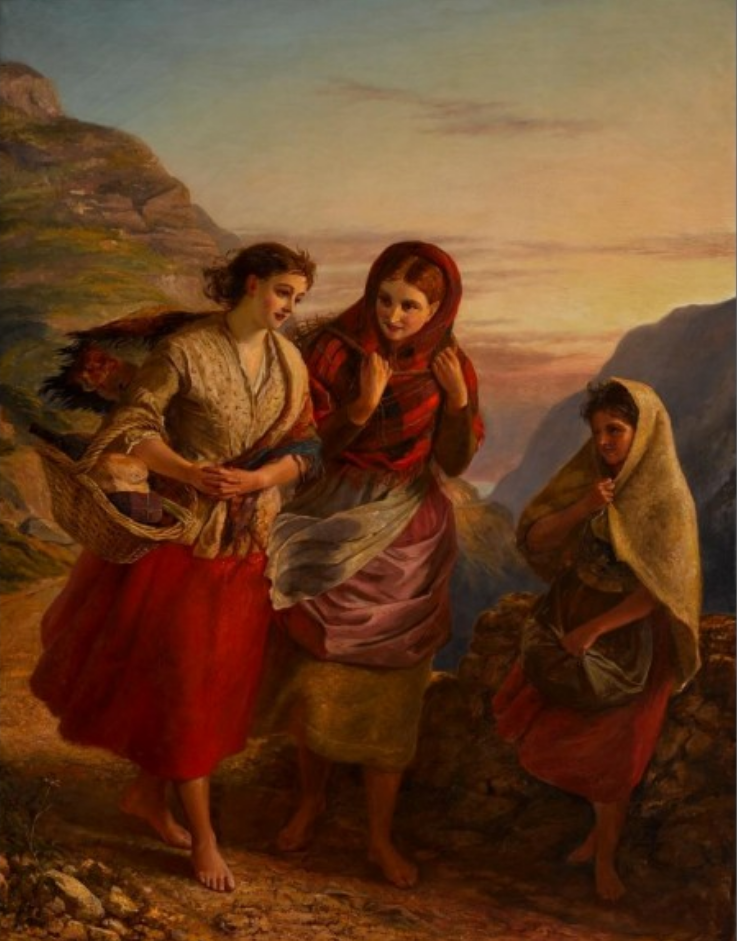 From the Castle playing this dual role throughout the time of the Great Hunger, to today hosting an exhibition of Famine-related art, we see the continuation of the multifunctionality of the site. The exhibition spans 170 years of art, from Romanticism to post-modernism, with paintings, sculptures, and other media from many leading Irish and Irish-American artists. For a long time the reality of the extent of the Famine and poverty in Ireland was rarely portrayed in art, which can be seen here in 19th century works such as Connemara Girls by Sir Thomas Alfred Jones. Over time artists, as well as historians, authors and others, began to grapple with the enormity of this event in Irish history. There was a particular surge in Famine-related art in the 1990s during the 150th year anniversary of the Famine, as seen from works like Rowan Gillespie’s sculptures. Even more recent pieces such as Roimh After by Robert Ballagh convey that this is a subject which persists to inspire artists, as they continue to express the anger, sadness, and horror of the effects of the Great Hunger.
Over 150 years after the Relief Commission and the visit of the “Famine Queen”, Dublin Castle now provides a space for us all to reflect on this. 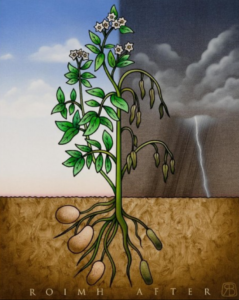 Roimh After by Robert Ballagh, 2017

Coming Home: Art and the Great Hunger is situated in the Coach House Gallery, Dublin Castle Gardens. Open every day from 10am to 5pm until 30th June. Admission is free. For events and workshops relating to this exhibition click here. The exhibition will be then moving on to Uillinn: West Cork Arts Centre in Skibbereen and Cultúrlann Uí Chanáin in Derry.