When it comes to Dublin landmarks, none are more synonymous with the Irish judicial system than the Four Courts. Located on Inns Quay, it has housed Ireland’s law courts since 1802 and remains a key feature of the capital’s riverside.

However, the first week of fighting in the Irish Civil War during June 1922 saw the historic building almost completely destroyed in an all-consuming fire – when a registrar surveyed the ruins a few days later he remarked how some of the statues had ‘the consistency of cream cheese’. After a short period in the King’s Inns, the courts were temporarily relocated to Dublin Castle’s State Apartments while the Four Courts were slowly rebuilt. Although it had been originally hoped that the repairs would take two years, the state’s judges would end up staying at the Castle for the majority of the following decade – from April 1923 to October 1931.

During this period, legislation was passed by the Dáil in April 1924 to establish the new court system for the Irish Free State in the aftermath of independence from the United Kingdom. Including a new Supreme Court and revamped High Court, it is a structure that continues to operate to this day. A short opening ceremony for these new courts swiftly followed on 11 June and took place on the Castle grounds – outlined below is a description of events as they unfolded just over 95 years ago. 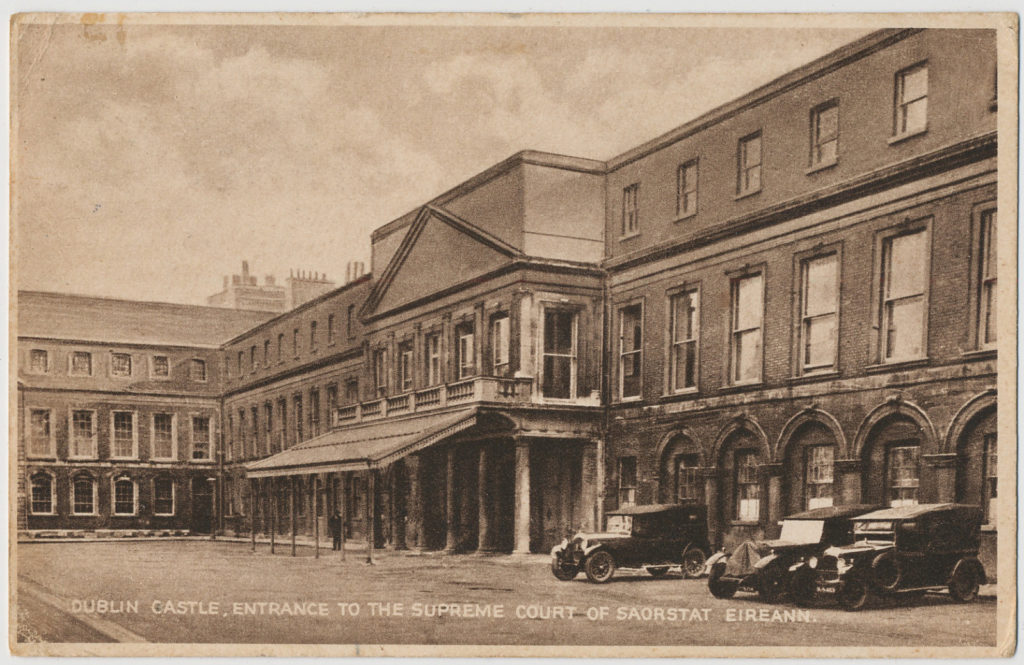 Beginning just shortly before 11 o’clock in the morning, the ceremony seemingly attracted a large gathering of the general public in spite of drizzling rain. Onlookers began to arrive into both of the Castle yards in the early hours with many of the windows and balconies ‘filled with sightseers’, according to the local press. State troops had been drawn up in the upper yard and behind them ranked a strong contingent of the Dublin Metropolitan Police – both combined to form a guard of honor as guests arrived on site.

Among those in attendance was W.T. Cosgrave, the President of the Executive Council (nowadays known as Taoiseach), and his wife. They were both accompanied by members of Cosgrave’s government, including the Vice-President and Minister for Justice Kevin O’Higgins, and greeted in the upper yard by the Inspector-General of the Forces, Eoin O’Duffy. Lord Glenavy, who chaired the Judiciary Commission that had helped design the new Irish courts, was also present along with many county judges, solicitors, and members of the bar across the country.

The main procession started with the emergence of the judges from the old Privy Council Chambers at the south-east corner of the quadrangle. Guided by a scarlet carpet laid out along the yard, they walked one-by-one towards the entrance to the State Apartments as the army band played the ‘Soldier’s Song’. Once inside, they marched up to the grand staircase and into the Throne Room – which at that stage was known as Court No. 4 – to be sworn into their new positions.

Kevin O’Higgins leaving the ceremony. Courtesy of the National Library of Ireland

At the head of the procession was Hugh Kennedy, the first Irish Chief Justice and arguably the most influential legal figure in the country at the time. During the revolutionary period, he was a key advisor to the representatives of Dáil Éireann throughout the Anglo-Irish Treaty negotiations. Kennedy remained busy after independence by helping to draft the Irish Free State constitution, serving as Ireland’s first Attorney-General, and sitting on the Judiciary Commission along with Lord Glenavy. The relocation of the law courts to Dublin Castle had also been supervised by him.

In the years after the opening ceremony Kennedy’s office would be located in the former Queens bedroom, at the top of the rooms known today as the State Apartment Galleries, and it appears that he took a keen interest in trying to preserve the Castle’s historic integrity during the court’s stay there. He was against holding jury trials in the Throne Room (which he described as ‘beautiful’) for fear that it would lead to its deterioration and was also against holding court sessions in the Chapel Royal. The Chapel was eventually opened up to hold some Circuit court sittings between 1927 and 1931, despite Kennedy’s suggestion that it should be used for music recitals.

Kennedy was also eager to introduce more reforms to the Irish legal system, and famously planned to replace the traditional attire of wigs and gowns with more colourful costume based on the robes worn by the Brehons of old Gaelic Ireland. Although his attempt failed, the 1924 Castle ceremony (the format of which he had devised) saw all of the judges opt for morning dress and silk hats as opposed to their customary robes – only the newly-appointed Attorney General John O’Byrne wore a full-bottom wig and gown. 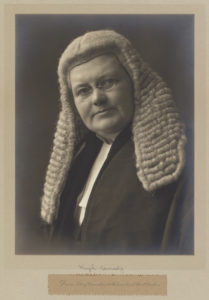 It was just after 11 o’clock by the time the judges had made their way into the Throne Room and onto their assigned places on the bench. Adjoining the bench was the jury box, where President Cosgrave and his ministers were seated. Chief Justice Kennedy then quickly started to administer the oath of declaration to the remaining judges in the order in which they had entered the State Apartments.

First in line was Timothy Sullivan, who was sworn in as the first President of the High Court. He would eventually become the state’s second Chief Justice in December 1936 following Kennedy’s death. After him came Gerald Fitzgibbon and Sir Charles O’Connor, both of whom were appointed to the Supreme Court.

The remaining High Court judges to take the oath were James Creed Meredith, Thomas Lopdell O’Shaughnessy, William Wylie, William Johnston and James Murnaghan. Kennedy had personally overseen these appointments and sought to maintain a balance between the new nationalist order (such as Sullivan and Meredith) and the unionist tradition (including Fitzgibbon and O’Connor). 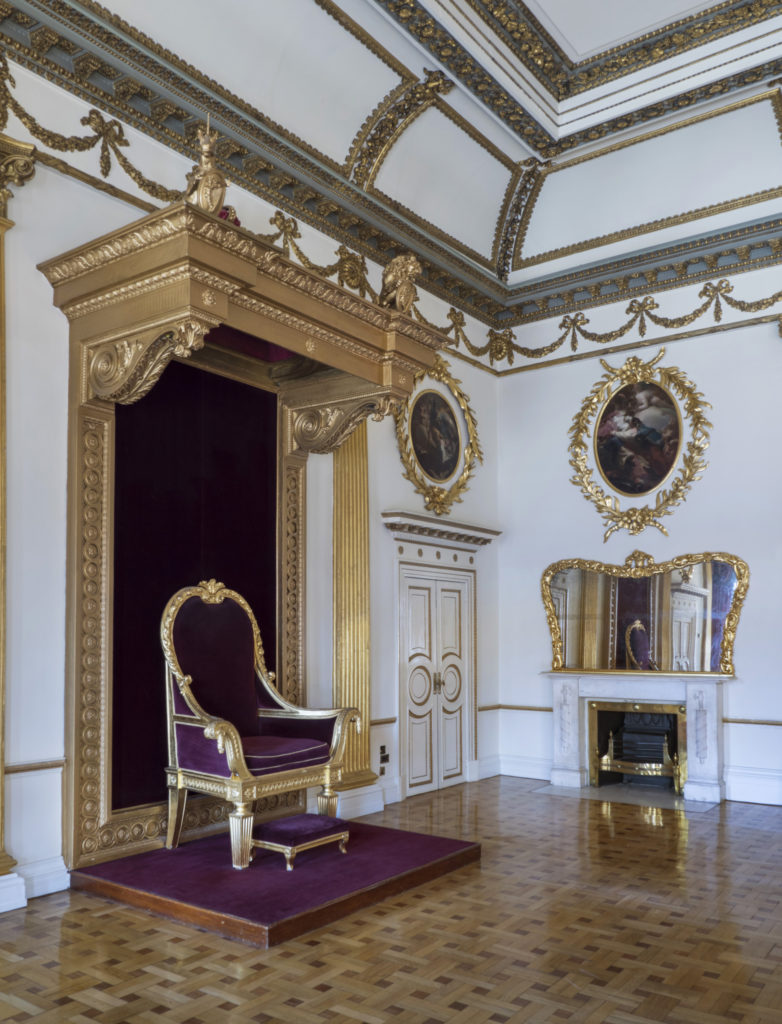 Dublin Castle’s Throne Room, where the judges were sworn in. Photograph by Davison & Associates, courtesy of the Office of Public Works, Dublin Castle

After an address from the Attorney General, Kennedy then delivered the keynote speech of the ceremony. Speaking first in Irish and then in English, he declared: ‘This is surely a precious moment – the moment when the silence of the Gael in the courts of law is broken. The moment when Irish courts… are thrown open to administer justice according to laws made in Ireland by free Irish citizens’. Proceedings were then brought to a close by well wishes for the incoming judges from James Moore, the President of the Incorporated Law Society.

It is fitting that one of the final lines in Kennedy’s speech alluded to the ‘work that lies before us’ – almost immediately after the conclusion of the ceremony, the judges retired to the Benchers’ chambers where they were assigned various duties and sat to discuss the business of the courts. The aftermath of separation from the UK, the War of Independence and the Civil War had left the fledgling courts with a deluge of cases to process – many of which would take place in the State Apartments.

The briefness of the Dublin Castle ceremony underlined the need for the judges to begin their work as soon as possible. But it also represented a significant achievement for the newly independent Irish state – the judicial system that had been inherited from the British had now been successfully refurbished into, what the Irish Independent described the following day as, ‘a national institution’.